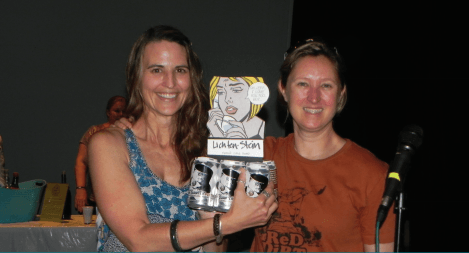 Back in the day, drinking homebrew was for the brave, the foolhardy or the home brewer. Judging from the talent on offer at Joe’s Movement Emporium on a warm evening at the beginning of June, the likely audience should widen considerably.

The Art and Craft of Beer was an intriguing collaboration between two local mainstays. Joe’s,  the pre-eminent community performing arts center in the area, and the Gateway Community Development Corporation (Gateway CDC), a key player in supporting economic development along Route 1. They came together to host an event that highlighted a great crew of local home brewers and potters, some from much further afield. The former challenged our taste buds; the latter piqued our artistic sensibilities with handcraftedreceptacles. Both did a sensational job.

“Creativity abounds in the Gateway Arts District,” said Gateway CDC Executive Director Carole Bernard.  “We knew the number of [area] home brewers was growing, and we wanted to do a fun event that incorporated art with this trend … as well as draw people [here].” And draw them they did; the place was packed.

Sadly, only the steins were for sale. The 10 innovative beers were just there to tease us with (very) small samples, not to purchase and take home. Despite the rationing, many brewers ran out, leading to urgent crosstown dashes to replenish supplies.

The potters’ work was on sale but could only be used to slake future thirsts. No brewer I saw offered to fill even the smallest or most expensive purchase. Franklins, the local brewpub, supported the event with larger samples of what the professionals had to offer.

The homebrewers were nothing if not accommodating. Having already forsaken prime brewing (and drinking) time for the competition, they all gamely explained the brewing process to the sipping hordes. The pride in their work was obvious.

And they seemed to be as inventive in naming the beers as brewing them: Half-Wit and Wisdom was a Witbier-style beer, while the Geri Halliwell, an excellent aromatic beer, was infused with ginger and spice, a nod to its namesake’s career in one of Britain’s most popular girl groups. The Hamilton Vampire Ale, adorned with pictures of George, featured the description a “well-tanned ale” and the slogan “sometimes you want a beer with bite.”

The potters were no slouches either, displaying several beautifully shaped steins of varying styles. The best were awarded such prizes as the Fine Stein, won by Sarah Nikitopoulos of Red Dirt Studio, and the Lichtenstein/People’s Choice, which went to the artist who won the POPular vote, Laurel Lukaszewski of Flux Studio. Those artists are based in Mount Rainier, but two others hailed from Northern Ireland: the Franken Stein winner, Andrew Cooke, and the Judges’ Choice pick, Inga Hamilton.

Before winning the Judges’ Choice for beer, Mike Corigliano asserted that “the U.S. is still a colony” when it comes to beer and the making of it.  Given that so many of the Founding Fathers (home)brewed, and many of their modern counterparts have refined the process to produce wonderful craft beer, history may demur. Corigliano won the for an ESB, an English style, Extra Special Bitter, which may have colo(u)red his view.

My favorite was also apparently the crowd’s favorite. Bill Updike and Krista Schyler won the People’s Choice for a black rye IPA that was professional grade and one I would pay good money for anytime.

Many valiant runners-up deserve mention, including  Janet McKinney who ferments her spare time with beer bread, beer pizza, margarita cookies and bourbon onion dip. Rick White and Marylee Haughmont’s lavender beer was perhaps the most esoteric, and certainly the most aromatic.

Charter school to open in Hyattsville

Hyattsville Life and Times, 9 years ago 2 min read
From the Editor