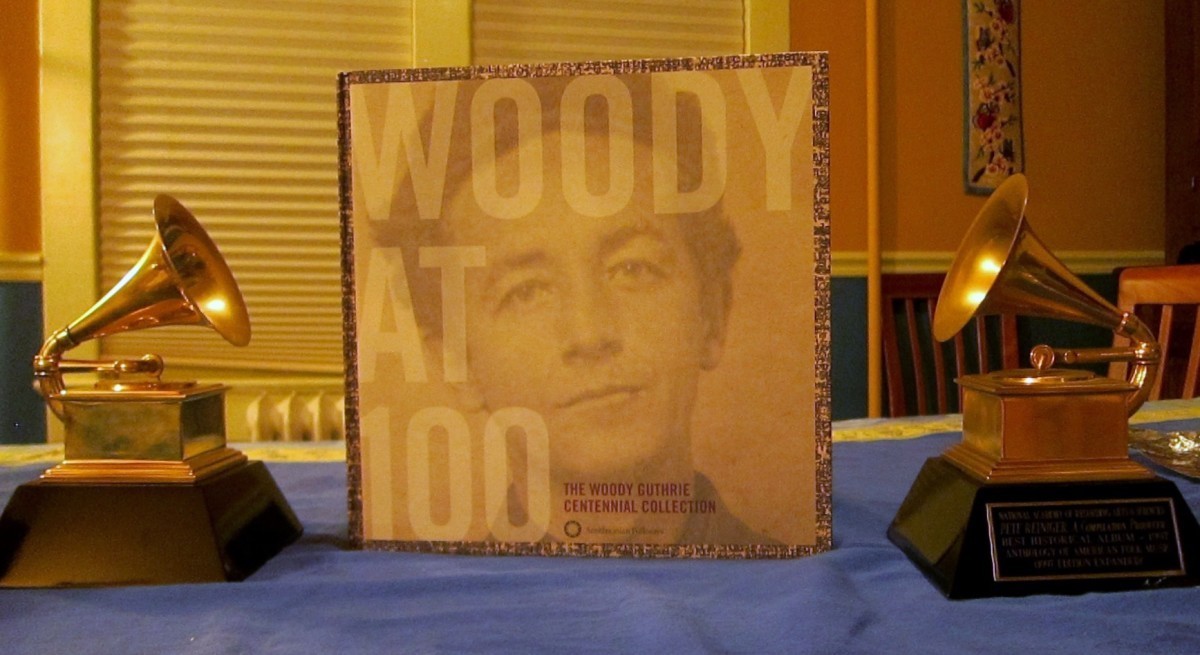 BY SUSIE CURRIE — Many of your neighbors will be watching the 55th Annual Grammy Awards on February 10. But how many will be listening for their names?

Longtime Hyattsville residents Pete Reiniger and Stephen Wade have been nominated for projects they completed for Smithsonian Folkways Recordings, the nonprofit record label of the national museum.

Woody at 100: The Woody Guthrie Centennial Collection, a comprehensive boxed set marking the singer’s 100th birthday, is up for Best Historical Album. Reiniger, the label’s chief engineer, was nominated for his work on it.

Another Folkways project, the album Imaginaries, was nominated for Best Latin Rock, Urban or Alternative Album. Reiniger also worked on that one; if the group, Quetzal, wins the Grammy, so will each member of the production team.

“For the Quetzal recording to be nominated is kind of fun,” he said, “because it’s rock — an unusual genre for Folkways.”

Reiniger already has two of the coveted golden gramophones. In 1997, his work on the Anthology of American Folk Music helped earn it Best Historical Album; in 2009, he shared credit for Best Tejano Album, “Borders Y Bailes,” as its engineer.

For Stephen Wade, getting his first Grammy nomination capped a year of professional milestones.  His book The Beautiful Music All Around Us, 18 years in the making, was published in September, the same week that his album Banjo Diary: Lessons from Tradition was released. Wade both performed on the album and wrote the accompanying 44-page text that made him a contender for Best Album Notes.

That news came soon after he got word that Bill Stepp, one of the musicians he’d written about in Beautiful Music, would be one of this year’s 27 Grammy Hall of Fame inductees. Stepp was being honored for his 1937 arrangement of “Bonaparte’s Retreat,” which was one of the pieces Wade had uncovered in his field research for the book.

Glad that Stepp was finally getting his due, if posthumously, Wade thought no more about the Grammys. Until he got an e-mail a couple weeks later.

“I had no idea” the album notes were in the running, he said. “I came downstairs with this look on my face. My wife, Michaelle, could tell something was up.”

The couple has lived in Hyattsville for over 20 years. Wade first came to the area to perform his one-man show, “Banjo Dancing,” at Arena Stage. Booked for a three-week run in January 1981, the show ran for 10 years.

“That was a long three weeks,” said Wade.

Reiniger first came to Washington in 1973 to work for the Smithsonian Folklife Festival, a two-week event staged on the National Mall every July. In 1975, he became the technical director for the event, a position he held for various stretches until 1999.

He met his wife, Arlene, in the early 1980s, when both worked on the festival. Arlene continues to work as a program coordinator at the Smithsonian Center for Folklife and Cultural Heritage, where she also manages the intern program. They moved to Hyattsville in 1988.

On February 2, Wade will be performing selections from the album and signing copies of his book at Busboys & Poets. The event is scheduled for 5 to 7 p.m .in the Zinn Room.

Don’t expect to get a glimpse of either man on the red carpet the following week, though.  The live telecast shows the winners of only a handful of the 81 categories. The rest are announced in a ceremony that starts hours earlier in the same venue, the Staples Center in Los Angeles.

Besides, said Reiniger, “being nominated is almost better than winning, because there are only five nominees in each category. To get peer recognition for your work is always pretty awesome.”