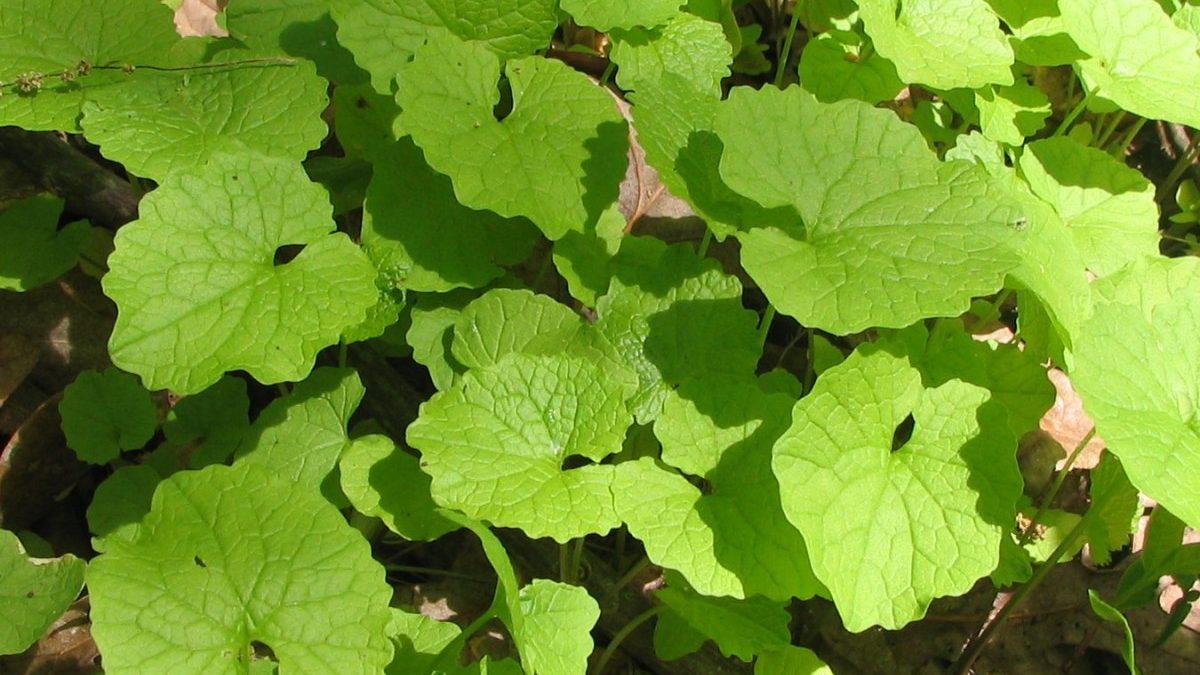 From early March through May, the edges of many local woodlands are decorated (some say defiled), by a green invader brought to Eastern North America by early settlers who needed an early spring food stock and medicinal herb to help their survival.  Garlic mustard (Alliaria petiolata) is a ubiquitous, herbaceous plant that receives contempt from native plant and wildflower aficionados and raves and recipes from foragers and wild food advocates.

Akin to popular vegetables, such as cabbage and broccoli, this invasive brassica was first reported in the early 19th century and has spread through most of the East Coast of the U.S., as well as parts of the Midwest U.S and Southern Canada.  The plant is biennial and, in warm winters, it over winters as an evergreen rosette that resembles ground ivy.  Ground ivy,  also called gill-over-the-ground (Glechoma hederacea), is another invader originally brought from Europe and Asia for its medicinal properties.

Garlic mustard starts small, but may rapidly grow to three feet tall, shading out many native spring plants.  The mustard’s arsenal also includes allelopathic chemicals released by its roots which may poison the rhizomes of many native plants, further inhibiting their growth.

Despite its insidious and malicious survival methods, this plant, remains a fascination and fancy of many foragers, with recipes ranging from pesto to salad. Recently, though, research from Dr. Don Cipollini of Wright University suggests that the plant may also contain cyanide, a less desirable addition to any meal.  However, the somewhat bitter taste of garlic mustard in most dishes may deter people from eating large, potentially hazardous quantities.

Garlic mustard has been targeted in many invasive removal efforts, some in nearby Magruder and Paint Branch parks by both the Anacostia Watershed Society and the Maryland-National Capital Park and Planning Commission.

For the past 15 years, the Friends of the Patapsco Greenway have had annual garlic mustard removals and recipe competitions with enthusiastic support from people throughout the state. Optimal removal times are in April and early May, when the plant is in flower and before the seeds are ejected.  It is important that the plants be bagged after pulling, to prevent the spread of the plant.

Garlic mustard is also the focus of a global survey where researchers are comparing the growth and size of New World garlic mustard with its Old World relatives.

The aggressive spread of garlic mustard and other invasive plants is partially abetted by the lack of native predators.  However, recently, it has been noted that the familiar cabbage butterfly’s caterpillars do indeed feed on garlic mustard. (Yes, these are the same caterpillars consume my backyard cabbage and broccoli).  Ironically, the cabbage butterflies who eat garlic mustard are also invaders and have begun to displace our native white butterfly who, interestingly, eats native brassicas such as toothwort.

When the native white butterfly caterpillar eats garlic mustard, it may die from toxins in the plant; poor Momma butterfly cannot differentiate garlic mustard from native mustards. So goes the circle of life. ”Hope” for limiting the spread of garlic mustard (beyond the removals provided by volunteers) may lie with some of the powdery mildew and weevils that are being introduced to control it (but there’s that circle again).

Briefly mentioned above was ground ivy, far less showy than garlic mustard, but equally widespread.  This plant was introduced by colonists for making teas which were believed to have medicinal properties.  Ground ivy is in the mint family and has the characteristic square stem, but is far less tasty than its spearmint and peppermint cousins.

There are other local plants (some invaders and some native) that may be carefully and sparingly harvested for edible and medicinal purposes. It is essential that the plants be correctly identified and carefully washed prior to any use.  There are some local plants that are very poisonous as well as many that have been visited and claimed by local animals and pets. Additionally, gathering of plants on private and many public lands may be forbidden and yield negative responses from landowners and public officials.  There are local organizations, such as Ancestral Knowledge, that offer information about edible and medicinal plants.

Election Reform: The Hyattsville election board is not playing around