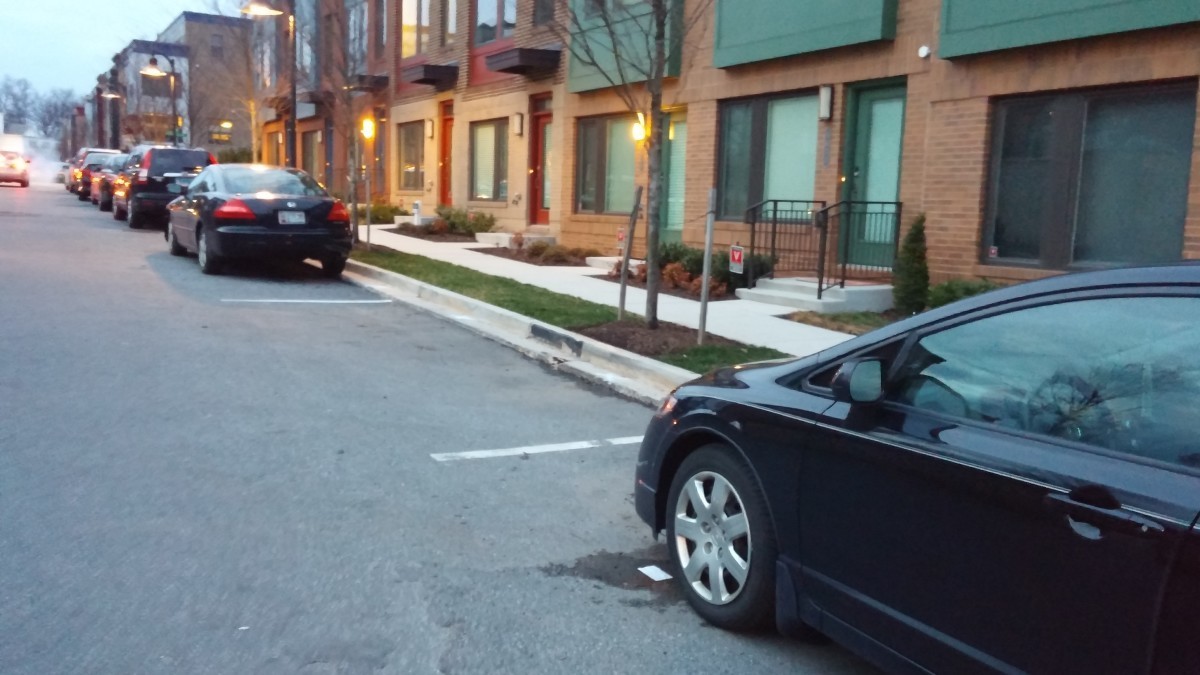 An empty parking space in the residential section of 45th Avenue shortly after a car was towed on a busy Friday night at the Shoppes at Arts District. Photo courtesy Rebecca Bennett.
Business

BY REBECCA BENNETT — On March 22, a pleasant Sunday evening in Hyattsville, some visitors from a Washington, D.C. neighborhood found themselves in a pickle. Kurt Larson said his family was visiting the Shoppes at Arts District for the first time when their car was towed from a street marked with what he claims is misleading signage.

Authorities say it’s a familiar situation for the stretch, where residential parking is controlled by the homeowners association for new townhomes by developer EYA.

“There is signage around the property as required by law. Yes, people who are not residents are getting towed frequently, and they are not happy about it,” Hyattsville City Police Department Spokesperson Lt. Chris Purvis said.

View Larger Map
For Larson, his wife and their 1-year-old child, “not happy” is an understatement. They popped in to pick up Chipotle, he said, and when they came back to their car a short time later, it was gone. The signage, he said, did not say they were not allowed to park in the open spot.

Thankfully for the Larsons, residents of the Palette Apartments came to their rescue and gave them a ride to their vehicle, which had been towed to the other side of the train tracks.

Eight-year Hyattsville resident Amanda Eisen said the same thing happened to her family earlier in January, but the incident’s timing meant that she walked home in freezing rain with her 6-year-old daughter while her husband got the car. Eisen said her family had stopped for a bite to eat. Not only was their car gone when they returned, she said, but two women—one pregnant—had parked and been towed from the same parking spot in the meantime.

The Hyattsville Life & Times took a first-hand look at the situation. The spaces on 45th Avenue, between the Palette Apartments and Madison Street behind the Shoppes at Arts District, appear to be unmarked. A small handful of spaces are clearly marked “permit parking 24 hours.” Only two “private property” signs are present on the street’s long stretch. Those signs are vague, detailing how to display a permit, if one is needed. A third “private property” sign says unauthorized vehicles will be towed, but it is on Kennedy Street and set apart from 45th Avenue.

These signs, according to Section 26-142 of the Prince George’s County Code, fulfill the property owner’s legal requirement, which states the only required signage before towing is a “private property” sign posted near each entrance of the property.


“Regardless of the county code, the sign doesn’t say you can’t park there. … I’ve never seen a publicly accessible road marked private property,” Larson said. “All that is needed are three to four no parking signs.”

On a busy Friday evening, HL&T witnessed just how fast a car could be towed. Once the tow truck driver got out of his rig, it was only a matter of seconds before the truck was pulling an SUV away.

Along with EYA and Streetsense, Pulte Homes developed some of the adjacent property in the area. A spokesperson for Pulte said, “This parking policy was spearheaded by a parking committee made up entirely of [EYA] homeowners. They drafted a detailed policy, went through a legal review and spent more than a year reviewing it before the board approved it last year.”

In contrast, the parking spaces in the adjacent commercial parking lots run by Streetsense clearly indicate when parking is by permit-only, for specific business’ customers, or only allowed for a short amount of time.

Jake Rollow, spokesperson for the City of Hyattsville, said, “We are aware of the concerns of Hyattsville residents, businesses and visitors regarding the signs and towing, and we have requested a meeting with the homeowners association at EYA.”

City officials said Legum and Norman is the new property management company as of April 1. “They are aware of the issues and plan to visit hiring a new tow company and/or changing the existing contract to allow more leniency,” Lt. Purvis said.

As for the Larsons and the Eisens, their dinner cost $175 more than they expected.

The HL&T reached out EYA for a comment, but had not received one as of press time.

The Cali Corner: To Hyattsville with love

DeMatha runs win streak to five with 27-point victory over No. 1 McNamara