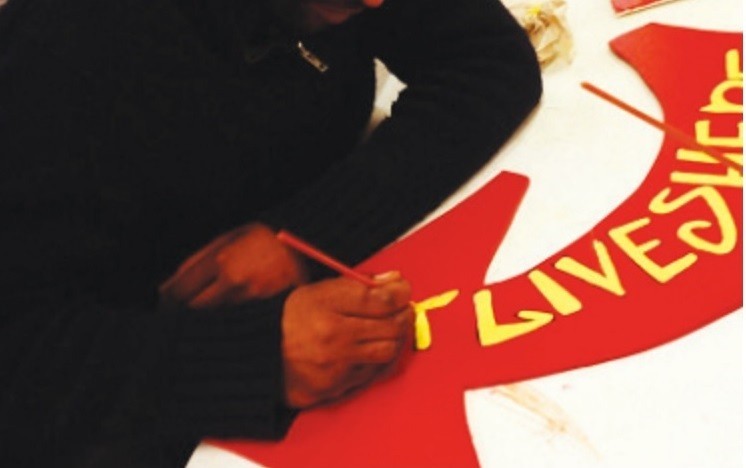 The name of the project “Art Lives Here” is a three-word proclamation affirming the temporal and geographical presence of art, and its symbol is a bright red arrow with these words on it.  The project itself is far ranging. Brooke Kid, the project’s artistic director, summarizes it as “a visibilty campaign for the Gateway Arts District with a concentration of programs in Mount Rainer, to highlight our efforts in creative place-making.”

The spring season of the project, a long time in the planning, officially launched at Busboys and Poets on April 5.  Four of the 32 collaborating artists and artists groups presented information about their work and performances.

Nehemiah Dixon III, an artist who has exhibited at museums including the Phillips Collection, and now teaches art at Joe’s Movement Emporium,  conducted what Kidd calls “an art attack,” which she describes as a visual art flash mob.  Dixon provided the logo arrows printed on cardstock, along with various art materials and encouraged attendees to decorate their own Art Lives Here arrows, to take photos of them “pointing the way to where art is” and send them back to the group.

Maurice, Philippa and Friends, a group that centers around jazz vocalist Maurice Johnson, and pianist Phillippa Smith-Tyler played a short set. Melissa Glasser showed a time-lapse video of her preparing an installation for the recently-opened Mount Rainier Circle Deli cafe.

Finally, Will McKinley-Ward talked about Launch Pace Music, his “music incubation space” designed by local musicians and music educators to assist high-school music acts in developing songcraft, stagecraft, and production skills. The owner of a vacant space in Mount Rainier has allowed access to the space for three months as long as it is empty. McKinley-Ward has already set up a small recording studio and rehearsal areas. This month, local groups can apply through the website, www.launchpadmusic.wordpress.com. Two finalists will receive instruction on collaborative performance and live sound mixing, and then participate in a showcase performance on May 18.

This is the third year that Joe’s Movement Emporium has been involved with matching artists with businesses, but this year’s project is on a bigger scale, with “group ownership and leadership” formed from an “incredible team” that extends throughout the Gateway community. Like the evening at Busboys, the project itself has many strands, everything for gallery exhibits, to a 5K run, to block clean-ups.

A grant of $50,000 from the National Endowment for the Arts provides a significant portion of the funding, with contributions from several other sources including the Cafritz Foundation and the Gateway CDC. In turn, Art Lives Here issued a call for projects and funded a variety of local partnerships and collaborations.

For example, the Hyattsville Community Arts Alliance has received a grant to partner with the Mon Cheri Haitian Fine Arts Gallery in Mount Rainier.  Mon Cheri, with its collection of artists of international acclaim, is making a portion of its gallery available for a group show mounted by artists of HCAA. The show will open with a reception on April 26, the day of Mount Rainier’s Better Block Party event, and run through May 13. Local singer Nancy Almquist will be performing during the reception and there may be other entertainment as well.

According to SallyAnn Rogers, the Hyattsville Community Arts Alliance (HCAA) and Mon Cheri are sharing their mailing lists to increase scope of participation.  This fits into what Kidd considers one of the goals of Art Lives Here, to  “increase audiences at everyone’s events through the collaborative marketing efforts.”   Kidd adds that “connecting [the gallery] to a membership based collective will have a strong partnership that will go beyond just this spring.”

HCAA artists are also planning  to be a part of the Open Studio Tour Day on May 11, by setting up a pop-up gallery in front of the Mon Cheri to sell additional works from HCAA artists

Another Hyattsville participant will be the musical group known as the “Wild Anacostias,” whose “nominal figurehead” Joe Atkins and wife Dana Grabiner have lived in Hyattsville since 2009.

The band’s repertoire is split between Cajun and zydeco songs led by accordion and fiddle, and New Orleans-style tunes led by horns (brass and reeds) and guitars. “The most wonderful thing about the Wild Anacostias Brass Band,” says Atkins, “is the way it organically evolved from friends and neighbors just getting together over the years.”

Like several other events on the agenda, their performance remains to be scheduled.  Kidd notes that currently everyone is “moving from planning to implementation phase.” She adds that because the events are so collaborative the scheduling  “takes time – more time than you ever imagined.”

For a complete schedule of events, go to the Spring Season tab at http://artlivesheremd.wordpress.com