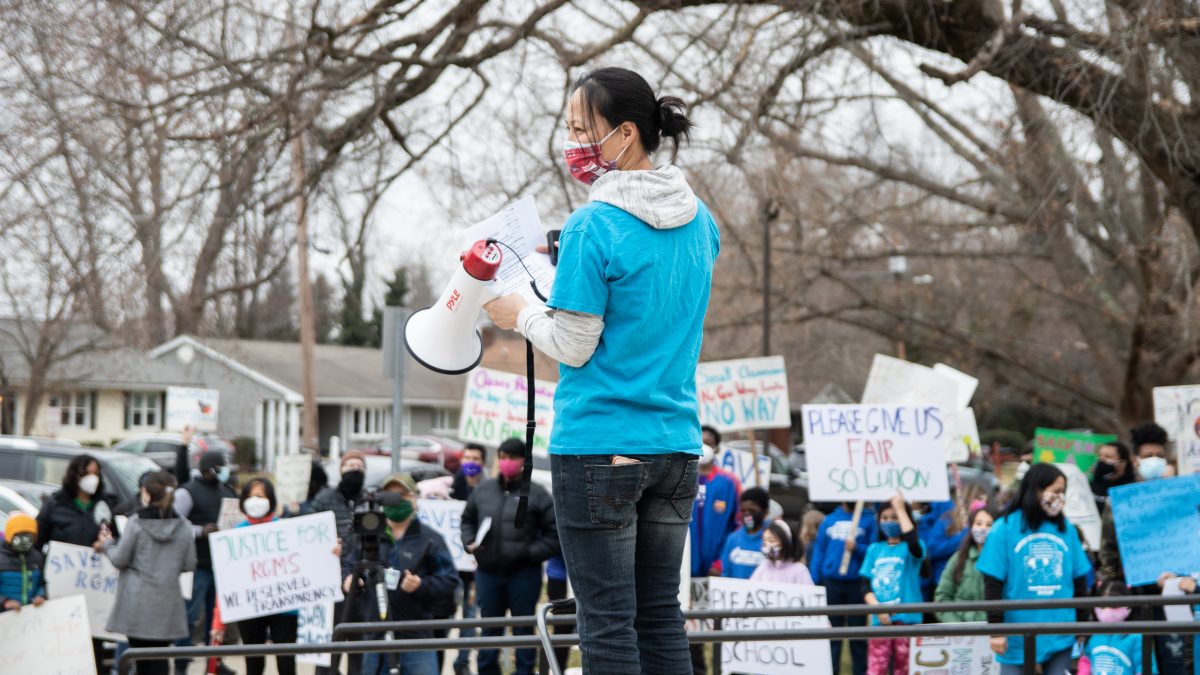 Lei Zong, the former president of the Robert Goddard Montessori School PTSA association and an organier of the protest speaks to demonstrators outside of the PGCPS Board of Education building in Upper Marlboro, Md. on March 17, 2021. (Julia Nikhinson/ )
College Park

In April, College Park students are returning to Hyattsville Middle School (HMS) and Cherokee Lane Elementary School (CLES) for the first time in over a year to participate in hybrid learning.

But where those students will attend school in the fall of 2021 is still being worked out, as of press time, according to several sources. Some suggest that the middle school students may be split between Thomas E. Stone Elementary in Mount Rainier and the Robert Goddard Montessori campus in Seabrook, while the elementary school students will go to St. Mark Catholic Church in Hyattsville.

Whatever the arrangements, they will be temporary. In the fall of 2023, the school district plans to open a brand new school building on the middle school site. The building will relieve overcrowding in area elementary and middle schools by accepting more sixth graders and allowing enrollment to increase from 900 students to 1,200.

Jason Washington, director of public-private partnerships (P3) for county schools, through which HMS and five other county schools are being rebuilt, said he looks forward to the day when students get to school, see the brand new building and understand that their community invests in them because they matter. He emphasized that the developers will pay steep penalties if the building is delivered late.

Dan Muth, head of Hyattsville’s volunteer Education Facilities Task Force, wrote in an email, “It is wonderful that the community will be getting a new middle school.” He pointed out, however, that next year’s seventh and eight graders won’t benefit from it. “We need to make absolutely sure that we aren’t costing them a credible middle school experience in a rush to simply find a place to house them.”

As recently as late July, 2020, the school district had no public plan to move students offsite while the new building was under construction.

During a presentation at a December 8, 2020 PTSO meeting, the school community learned of a plan to split the students between two sites; some students would share space with the Robert Goddard Montessori specialty program in Seabrook, which has a history of sharing their facility. Other HMS students would go to a now-vacant elementary school in Bowie.

Meetings to discuss the details of that plan were postponed or cancelled until the second week of March, when the school district, through town hall invitations to the Montessori and middle school communities, announced a different plan: The Montessori school would move, permanently, to the empty elementary school in Bowie, vacating their school building so that HMS students could stay together, there, while their school was rebuilt.

Robert Goddard Montessori’s parent-teacher association launched a vigorous campaign against moving students to Bowie, citing longer commute times for young children and space constraints at the Bowie site. The campaign included nightly virtual community meetings and culminated in a rally on the afternoon of March 17.

After Robert Goddard French Immersion School left the shared site in 2014, the Montessori school PTA had objected to Glenarden Woods Elementary School moving into its place. Several sources have told the College Park Here & Now that members of the Montessori PTA had been quietly organizing opposition to sharing space with HMS as well.

At a town hall for the middle school on March 18, and less than 24 hours after telling the Montessori community it would move to Seabrook, the school district returned to its prior plan to split HMS students and keep the Montessori school in its building.

The middle school PTSO, and similar organizations at four elementary schools that feed into the middle school, sent a joint statement of protest to the school district on March 23. The letter objected both to the commute times — some of which the school district forecast to be longer than an hour — and to the perceived preference given to the interests of students at Robert Goddard Montessori, a lottery-based specialty program school, over HMS, a Title I neighborhood school, where more than 70 percent of students qualify for free and reduced-price meals. The middle school PTSO followed up with a letter-writing campaign.

The school district did not reply to our request for comment on the status of the current swing space plan. Several sources suggested that it may still be influx.

Another school serving College Park families, CLES is currently involved in a complicated relocation process due to construction delays.

During a listening session on March 28, CLES parents raised concerns over the proposed relocation.

“The construction was supposed to be done this past summer. It is not these kids’ fault, these families’ fault, that these delays are happening,” Parent-Teacher Organization (PTO) member Lillian Garcia said. “I don’t think it is fair for the Cherokee Lane families to be moved to another location.”

PTO member Bianca Flores told representatives that parents were sent a survey that queried about relocation and offered two options: send the children to Middleton Valley or separate the students by grade among three schools.

To Flores, neither option is acceptable.

Parents also cited transportation as a large issue. Dilcia Flores said that she is uncomfortable with the thought of nearly 40 children on a bus together during the pandemic. She also doesn’t want her child traveling long distances, especially without a seatbelt.

Parents also underscored that if a child missed the bus, they would also miss the entire day of school if their family couldn’t drop the child off due to transportation issues.

PTO member Rebecca Renberg said that many parents do not rely on after-school care because neighbors assist with walking children home. “If you look at the whole numbers of who would need before- and after-care, it would be big,” Renberg said.

CLES Principal Brian Galbraith said that there are currently 575 students enrolled at the school and that nearly half of the students take the bus.

“We are still short bus drivers … and we still have runs uncovered,” Galbraith said. “That could definitely cause some challenges.”

Prince George’s County Board of Education member David Murray (District 1) said he had not voted on the relocation proposal. In fact, Murray claimed that he hadn’t been invited to any meetings to discuss the issue.

“We are being purposefully cut out of this, because we are in favor of staying, and that wasn’t their plan,” Murray said.

Several parents also felt as if they had been excluded from the conversations involving their own children’s future.

“It was very much ‘We’re telling you all of this, and we’re not going to take comments,’” Renberg said.

Due to the uproar over Middleton Valley, State Senator Jim Rosapepe has been working with colleagues to find another option. College Park City Councilmembers Denise Mitchell and Maria Mackie, both of whom represent District 4, suggested that St. Mark Catholic Church could serve as a potential home for CLES students.

According to Rosapepe, there is currently an 80% chance that St. Mark’s will be used for CLES students.

“If St. Mark’s doesn’t come through, we’re a good way [away] from finding another solution,” Rosapepe said.