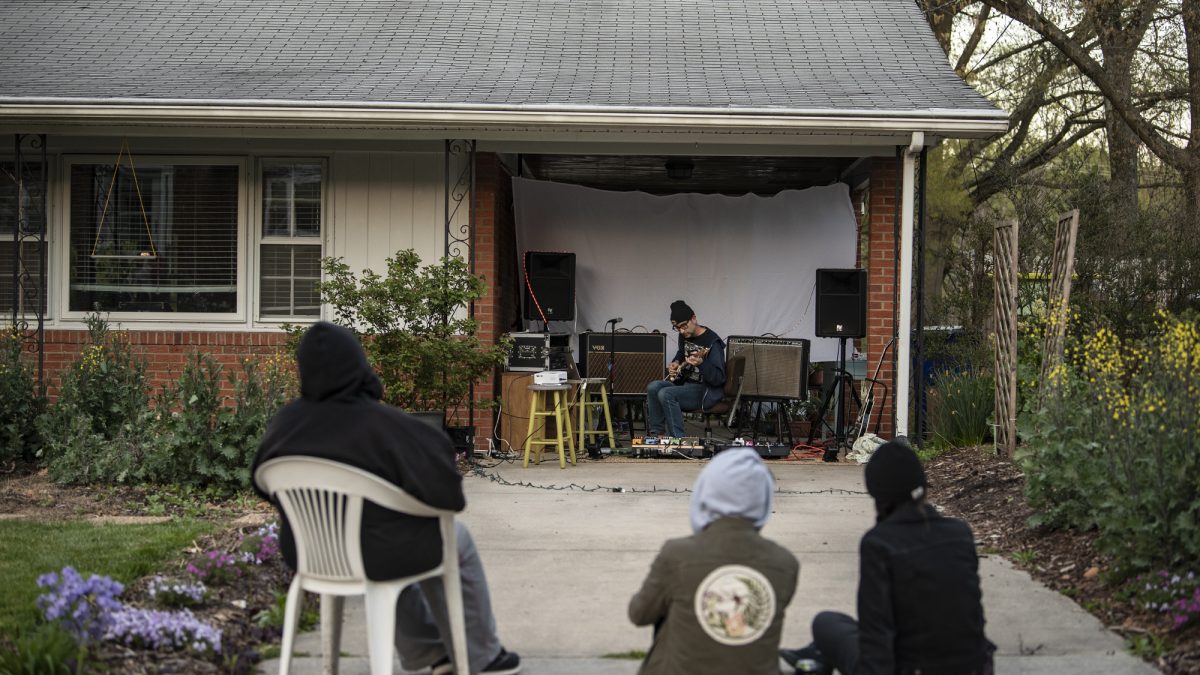 Thumping sounds on a Saturday evening drew people from streets away to a neighbor’s front yard.

That thumping? It was the rhythm of Taiko drumming, a traditional Japanese style, and it was emanating from a porch on Quebec Street. Setting up lawn chairs, neighbors gathered to watch Mark Rooney, Kristen Koyama, Kota Mizutani and Erika Ninoyu as they filled the block with music.

Even as so many of us remain cautious and careful due to COVID-19, music filled the city during April’s Spring Porch Fling. The event was sponsored by the College Park Arts Exchange (CPAE) and featured live performances, line dancing and even painting. The goal of this event was to bring the community together, all the while maintaining safe social distancing.

“There’s something about the shared experience, not just seeing live music but sharing that with other people and being a part of an audience … it’s important for everyone’s collective mental health and soul,” Rooney said.

Rooney, a Taiko instructor and performer, has lived in College Park since 2013. He said that the pandemic has made it harder for him to connect to share his music with people, citing the lack of in-person events and concerts.

“The inability to connect to an audience directly … it sort of takes your breath out of you,” Rooney said. “It really is defeating.” But participating in CPAE events this past year has helped him build connections within the community, and for that he’s grateful.

Guitarist Dominic Elliott echoed Rooney’s thoughts, emphasizing that music brings people together. Elliott plays the guitar, both acoustic and electric, and lives in the District, though he grew up in neighboring Hyattsville. When CPAE Director Melissa Sites reached out to artists in an email, Elliott jumped at the opportunity. He wanted to do what he could to help out the community.

Rich MacKenzie also performed during Porch Spring Fling, and said that having local artists come together and offer the event was important for the community. MacKenzie, who also goes by the stage name Shoemaker Levy, makes dream pop and shoegaze music, both of which feature reverb guitar over programmed drumbeats and keyboards.

MacKenzie went a step further and asked his neighbor Joseph Hoffman to create a short film to project onto him while he played during the event. Hoffman created a video of a pinball machine that looked like a lightning storm that matched MacKenzie’s beat.

MacKenzie said that while he was a bit nervous to perform live, the audience’s reaction boosted his confidence.

“If there are other musicians out there that maybe feel the same way I do, and they’re nervous to do this, I would say just do it,” he said. You just never know what kind of music your neighbors like.”

Aeryn Goldstein and Ananth Batni, members of the pop punk band Professor Goldstein, said that performing for the first time in six months was admittedly weird. But having an audience engage with their music — and even having a few run off to dance in a socially distanced manner — turned out to be a lot of fun, they said.

If you’d like to host or add your own music to Porch Play events, contact the College Park Arts Exchange at info@cpae.org.

PHOTOS: Bikers take to the streets for the Route 1 Rampage