From Where I Stand: A parting, a partnership, and a prize

Bio:  Mark Goodson is the managing editor of the College Park Here & Now 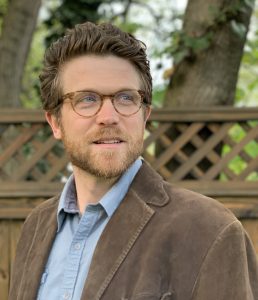 I first became interested in local journalism when I moved to Hyattsville, in 2011, and discovered  the Hyattsville Life & Times. As I read the city’s homegrown newspaper cover to cover each month, I realized I prefered independent journalism to syndicated news. The Life & Times brought me stories about people I was meeting, places I was discovering and issues that directly affected my family.

And while technology brings news to our fingertips faster than ever before, community is what connects us. Community journalism brings me the kind of news I care about the most.

When I moved to College Park, in 2018, I missed having a newspaper that brought the city to my doorstep every month. Then, in March 2020, I got wind of a newspaper in the works for the city  — a paper planned by Streetcar Suburbs Publishing, the same nonprofit that delivers up the Hyattsville Life & Times. I reached out to Chris Currie, who sat on Streetcar’s board, and the rest is history. The College Park Here & Now celebrated its second anniversary in May.

Currie’s dedication to the newspapers knew no bounds. He helped sustain the Hyattsville Life & Times for the 15 years he served on Streetcar’s board and was instrumental in bringing the Here & Now to College Park — he even sold ads without commission to get us through our first 18 months. Currie stepped down from the board in May.

Before departing, Currie tasked himself with doing the hard work to launch a third print newspaper, The Laurel Independent, under the Streetcar umbrella. As of this month, Laurel residents are receiving their inaugural edition of the paper, published under the experienced eye of veteran journalist Katie Jones. And like the Hyattsville Life & Times and the College Park Here & Now, The Laurel Independent will strive to serve up news that city residents likely won’t see anywhere else. And how fitting for this new newspaper to land where it has: Streetcar Suburbs Publishing is named for the old line that ran from the District out to Laurel.

Not only is The Independent launching this month, but the Life & Times and your own Here & Now were awarded first and second place in the National Newspaper Association’s Better Newspaper Contest. Yes, the nation’s top two local newspapers (according to the NNA) sit side by side, and for free, at Whole Foods. Currie was a staunch advocate for local journalism, and he worked tirelessly to deliver community news to our doorsteps. And with the launch of The Laurel Independent, his legacy lives on.

Tags #from where I stand #july 2022 edition #laurel independent
Previous

My Two Cents: Increase number of trees in the MD 500 project

The science of the city: Can volunteer fire companies survive?