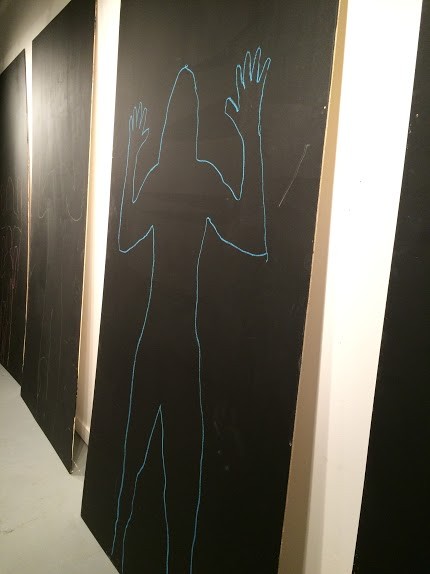 BY KAREN TANG — On the evening of September 19, the outside of the Art Works Now studio in Mount Rainier looked like a crime scene. The building was surrounded by chalk outlines sketched on black plywood. The art was intended to portray the physical position of Missouri teenager Michael Brown in the moments before his death.

This was the second “creative community action” the Gateway Arts District-based nonprofit hosted a in response to the shooting death of the unarmed teenager in Ferguson, Missouri on August 9 at the hands of a police officer.

In the aftermath of the shooting, riots broke out in surrounding Missouri streets. Protesters raised questions about the racial significance of a white officer shooting an unarmed black man.

The first Art Works Now event was held on August 15 and also addressed the shooting. According to the organization’s Facebook page, it was intended to, “help us respond creatively to yet another tragic killing of a young man with so much life ahead of him.”

The second event was intended to create a space for discussing the local implications of what recently happened in that small Missouri town. Nehemiah Dixon III, program director of Art Works Now, coordinated the event.

“I wanted to create a forum where we can at least start a dialogue about the [violence] we were seeing in the media, so the result was a community creative action,” he said.

In addition to the chalk drawings, the event included a discussion prompted by three questions. Participants were asked to name the issues, what they wanted to gain from the experience, and how they thought the community might make a difference.

As conversation flowed, the 24 contributors wrote keywords on a piece of plywood. This covered the plywood in words and phrases such as “no justice,” “fear,” “lazy mind,” “inequality,” and “disconnected.”

Attendees said they wanted to work on addressing racial divisions through ongoing and open discussion.

“Culturally, there is a deeply negative perceptions of black men,” Anne L’Ecuyer of Mount Rainier. said.

“I think fear goes both ways and I think ignorance comes from a lack understanding or fear from another person,” Gabriela Sotomayor of Adelphi said.
Participants said they wanted to make a change in the community by bringing awareness to racial stereotypes. Several said they hope to change the mindset of the community through leading by example.

“I think its important to have dialogue and discourse like we are having here,” said Troy Shockley of Southeast D.C. . “We have to be in a position to put [our opinions about the world] out there in our daily lives.”

The group plans to meet again in the near future, with organizers challenging attendees to invite three people to join them.

Unofficial results: Frazier may be the next Ward 5 councilmember