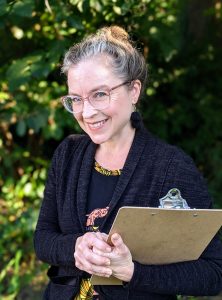 Susan Whitney is the new District 2 representative on the College Park City Council. She replaces Monroe Dennis, who decided not to run for a sixth term. In the Nov. 10 election, 271 voters cast ballots for District 2 candidates. Whitney received 164 votes, and Llatetra Esters held onto her seat, with 170 votes.

Whitney grew up in Texas and attended Tulane University, in New Orleans. She lived briefly in  New York, then returned to New Orleans. She has worked in fine dining, retail, freelance photography and journalism.

Whitney earned a masters in photojournalism from the University of Missouri in 2001, then relocated to Maryland. She bought her home in College Park in 2005. Whitney worked as assistant photo editor for Prince George’s County at The Gazette, a group of community newspapers owned by The Washington Post. In 2009, she joined Fleming-AOD, in Silver Spring and is the company’s bookkeeper and office manager.

“I have a knack with legal documents and handle all official contracts. I am the first stop for clients who are signing up for our services,” she said.

Whitney’s good at juggling more than one job. When she was a journalist, she shot weddings on the side. When she started working at Fleming-AOD, she also launched D.C. Lady Arm Wrestlers, a nonprofit organization focused on empowering women. They host events and donate the funds they raise to organizations supporting women and girls.

“We built the idea from scratch. A lot of women who participated said the events boosted their confidence in a way that was really meaningful to them,” said Whitney.

Whitney is looking forward to representing her district as she takes her seat on the council and hopes to engage more residents in local politics.

“I love solving problems, getting things done and helping people. I want to be persistent and see what we can do to make positive change for our neighbors,” she said.

From Where I Stand: Remembering Mr. Gailes