BY ANDREW MARDER — Local resident and former Hyattsville Life and Times editor Rosanna Weaver recently published her first book, Weaving a Family: Genetics, Identity, and Adoption. The mother of three adopted children, Weaver worked on the book for over three years before it was released. 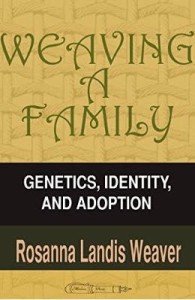 The book centers on the topic of nature versus nurture. As her children grew, Weaver began to notice differences between the three. Like many parents of multiple children, Weaver was initially lulled into the belief that after the first child, things would begin to repeat themselves.

“As with a lot of parents, I think you have the first and think, ‘this is what kids are like,'” she said. “Then you have the second and they’re completely different.”

“My oldest is very, very musical,” Weaver says. “She could sing ‘Oh, What a Beautiful Morning,’ from Oklahoma when she was little. That was something innate in her. We helped by exposing her to arts and giving her lessons, but if someone had done the same for me, I would still be a bad singer.”

Curious about the nature of their differences, Weaver and her husband Don began looking into the role that genetics plays in a child’s development.

For Weaver, genetics had always been a hobby; it has been her husband’s profession for years. Don is a molecular biologist, working for the National Institute of Health. When they first met, Weaver — an English major — read genetics books and wrote up book reports to give Don as presents.

In 2012, Weaver left her high stress job to focus on the transitions happening at home. Her oldest was about to go into high school, her youngest was moving into kindergarten, and the middle child was off to middle school.

Not long after, she met with Nell Minow, a corporate governance expert and publisher. Over coffee, Weaver mentioned her interest in working on a book about adoption and genetics.

“That sounds like a great book,” Minow told her.  “If you write it, I’ll publish it.”

With that encouragement, Weaver researched and began writing Weaving a Family over the next three years.

“I love doing the reading and the research,” Weaver says. “It was hard to stop that part and to move on to the writing.”

When she finally did finish the book, she found herself taking a mixed view of nature and nurture.

“Everyone will tell you it’s not nature versus nurture — it’s nature and nurture or it’s nature via nurture,” she says. “As a society, we’re learning more and more about genetics and we’re going to be wrestling with some difficult questions. Adoptive parents and children might be on some of the front lines of that thinking.”

Weaver sees it as an evolving issue that only gets more complicated as DNA testing gets easier and cheaper.

“Every parent’s task is helping a child understand their strengths and mitigate their weaknesses,” she says. “I think that a lot of our values — like kindness and inclusiveness — are getting picked up by the kids.”

The book takes all these points into account, with the goal of helping parents — both adoptive and non-adoptive — better understand the roles nature and nurture play in their children’s lives.

So far, the response has been overwhelmingly positive. Favorable reviews on Amazon and personal messages have shown Weaver the impact the book is having on readers.

“One of the nice surprises has been that even people without adopted children have found it an interesting or useful book to read,” she says.

Asked if she has plans to expand the book or publish again, Weaver says, “I would love to do more on the topic. I’m also thinking about expanding into a print version, but I want to see if the kids are comfortable with the idea. They might also be able to contribute to that.”

For now, the whole family is simply happy to have the first hurdle cleared. With her oldest child graduating from high school this year and a planned trip to Korea this summer, there’s enough going on without another book in the works.

Weaving a Family is currently available in the Kindle format on Amazon.

Laurel’s Moses Bailey is an Under Armour winner