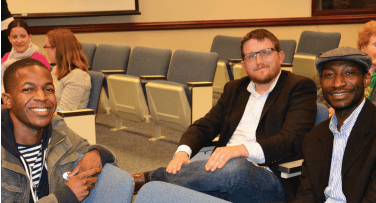 BY SUSIE CURRIE — On May 7, Hyattsville voters elected six new councilmembers in an unprecedented wave of political change.  In the most heavily contested race, and the one with the highest turnout, three-time candidate Robert Croslin defeated council vice president David Hiles by a margin of more than two to one.

Councilmembers are elected to four-year terms, with half of the 10 council seats on the ballot every two years. But the resignation of Ward 5’s Nicole Hinds Mofor earlier this year put a sixth council seat in play, marking the first time ever that both ward seats were open in the same election. (The ward’s senior councilmember, Ruth Ann Frazier, had already announced she would not seek re-election.)

Ward 5’s seats went to Clayton Williams, who takes Frazier’s seat for a four-year term after getting 77 votes, and Joseph Solomon, with 50 votes, who will serve out the remaining two years of Mofor’s term. In that race, Pastor Herrera came in a distant third with 15 votes.

This election may also be the first time that five of the six seats being contested were open. In addition to Frazier and Mofor, councilmembers Eric Wingard (Ward 1), Matt McKnight (Ward 3) and Carlos Lizanne (Ward 4) did not run for re-election. Wingard had registered to run on the last day, but soon dropped out, citing changing work obligations and frequent travel.

The meeting-attendance records of Wingard, Lizanne and Mofor had been under increasing scrutiny since at least March 2012, when a meeting they didn’t attend had to be cancelled after councilmembers could not pass an agenda.  Six of 11 votes were needed, but only seven members were present.

Whatever problems the new council will face, absenteeism is not likely to be one of them. Some councilmembers-elect have been attending more council meetings of late than the incumbents they will replace.

The voters, may also have a growing problem with absenteeism: Turnout was the lowest in at least four elections. According to the 2010 census, Hyattsville has 17,551 residents. On May 7, 986 of them voted for registered candidates, according to unofficial results. (Of these, over 400 were in Ward 2.)

That day’s near-constant heavy rains probably had something to do with keeping people away from the polls. But it continues a downward trend.

The six will have to hit the ground running when they are sworn in on May 20. Mayor Marc Tartaro has not yet presented a budget for the fiscal year that begins on July 1, saying that he is waiting for council action on changing the structure of retirement benefits for city staff. He has proposed keeping the property-tax rate at $.63 per $100 of assessed value. But the council narrowly voted against doing that on April 22, citing the need to see budget specifics first.

This vote became an issue in the election when Hiles sent a letter contending that his opponent was affiliated with councilmembers who did not vote to cap the tax rate, taken by some as an insinuation that they intended to raise the tax rate.  This sparked considerable debate on local listserves, and shortly afterward two councilmembers mentioned in Hiles’ letter, Candace Hollingsworth (Ward 1) and Tim Hunt (Ward 3) sent a letter endorsing Croslin for the Ward 2 seat.