BY REBECCA BENNETT — The an arm band of Tropical Depression Bill remnants, according to the Capital Weather Gang, moved through our area last night. This brought heavy rain, high winds and quite a bit of lightning. 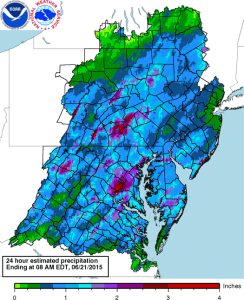 From National Weather Service reports, Hyattsville may have received from 2 to 2.5 inches of rain between 8 a.m. Saturday and 8 a.m. Sunday.

Hyattsville resident Matt Gembecki said a tree down (pictured above) took out power in the 4000 block of Hamilton Street sometime before 11 p.m. Saturday night. Power had been restored by early Sunday morning.

As of 11:45 a.m. Sunday, Pepco reports power is still out to less than 5 customers on Oglethorpe Street near Baltimore Avenue with an estimated restoration time by 1 p.m.

The sound of this lightning strike at approximately 9 p.m. shook up everyone around:

Flash flood warning until midnight. Pepco reports 98 customers with power out in Riverdale near Ravenwood Road, restoration estimated by 5 a.m. Check out this lightning strike in Hyattsville just a few minutes ago!

HVFD reaches out during its October open house