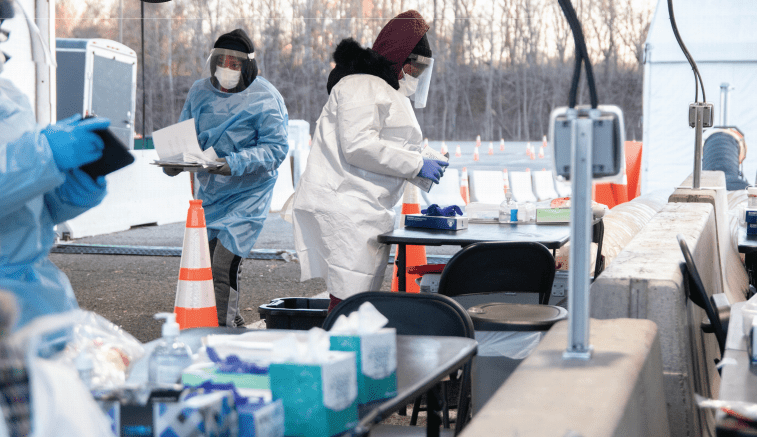 When College Park Mayor Patrick Wojahn arrived at the Wayne K. Curry Sports and Learning Center in Landover, he noticed that there weren’t many people milling around. The center is home to an Olympic-size pool, a six-lane indoor track and a huge gymnastics center, but the mayor wasn’t there to work out — he was there to get his first dose of a COVID-19 vaccine.

Wojahn was at the complex on Jan. 16, a Saturday. The vaccine had only been available in Maryland for a month, and establishing a mass-vaccination infrastructure was just starting to get underway: The pre-registration website was still being finalized, and the sports complex was one of few vaccine sites in Prince George’s County.

After checking in, Wojahn was directed to an indoor tent in the fitness center. Wojahn said that since individuals  were asked not to show up more than a few minutes early for their shots, not many people were waiting.

A nurse asked him about allergies, then advised Wojahn about possible side effects before giving him his shot. The nurse watched him for 15 minutes for any adverse reactions, and then he was free to go.

Afterwards, Wojahn said his arm hurt, but, “I was even able to go running later that day, and I felt a little more winded than usual, but I was fine.”

He said he was able to get his shot in the early stages of rollout only at the invitation of county officials, in support of their public confidence campaign. Although Wojahn said he was concerned about “skipping the line,” state guidelines allow officials who are considered essential to the continuation of government to be vaccinated early in the rollout.

As Maryland residents 65 and older are now being prioritized for vaccines, Wojahn said that getting scheduling information to the town’s oldest residents may be tricky.

He said that the College Park Community Center, which usually  serves the town’s senior population, has been closed during the pandemic. But a robust services program still reaches out to seniors with a newsletter, and vaccination information will be included in upcoming issues.

Both Pfizer and Moderna vaccines are being offered at most locations. The FDA has issued both brands emergency use authorizations based on efficacy rates and clinical trials. Each of these requires two doses; Pfizer doses are three weeks apart, and Moderna doses are four weeks apart. Other vaccines from drug companies Johnson & Johnson, AstraZeneca, and Novavax are showing promising results in clinical trials and may be available soon, pending FDA approval.

Maryland is rolling out the approved vaccines in three phases. These tiers follow CDC guidelines, and vaccinations are delivered, by appointment, as doses are available. The federal government oversees vaccine distributions to states.

Phase 1, which has three internal tiers, includes essential workers, including healthcare providers, postal workers, and educators, and individuals who are 65 and older.

Phase 2 is slated to start in April, depending on Maryland’s receipt of allocations. Individuals over the age of 16 with a higher risk of severe COVID-19 illness,  essential utilities workers and incarcerated adults are currently grouped in this phase.

Phase 3 is tentatively set to start in May and will serve the general population. Approximately four million Marylanders are in this group.

Due to limited vaccine allocations throughout the state, it may take several weeks, or longer, for residents to receive scheduling information from the county’s health department.

Six Flags America, in Upper Marlboro, which has been a COVID-19 testing site since June, is serving as a drive-through vaccination site. Vaccinations are also being offered at select Safeway and Giant Food stores in the county. As the federal government rolls out new distribution procedures, local pharmacies may receive vaccine allocations, as well.

The University of Maryland may also be designated as a vaccination site. While a timeline for the university’s participation has not been finalized,  the university’s health center will follow CDC and state  guidelines for vaccine distribution.

Although Phase 1 is fully operational and new locations are being established  weekly, vaccine rollout is not without stumbles.

“The primary [problem] currently facing every state in America is the extremely limited supply of vaccines that are being produced and allocated by the CDC and the federal government,” Hogan said.

“There’s only two companies—they just can’t make them fast enough,” Hogan noted. “Everyone in the world wants them, and there’s only so many [doses being manufactured].

“As frustrating as this is for every single one of us, this will obviously be a much longer process than any of us will like, and it’s going to require a great deal of patience for many months,” Hogan said.

Hyattsville police participate in statewide “Click it or Ticket” campaign