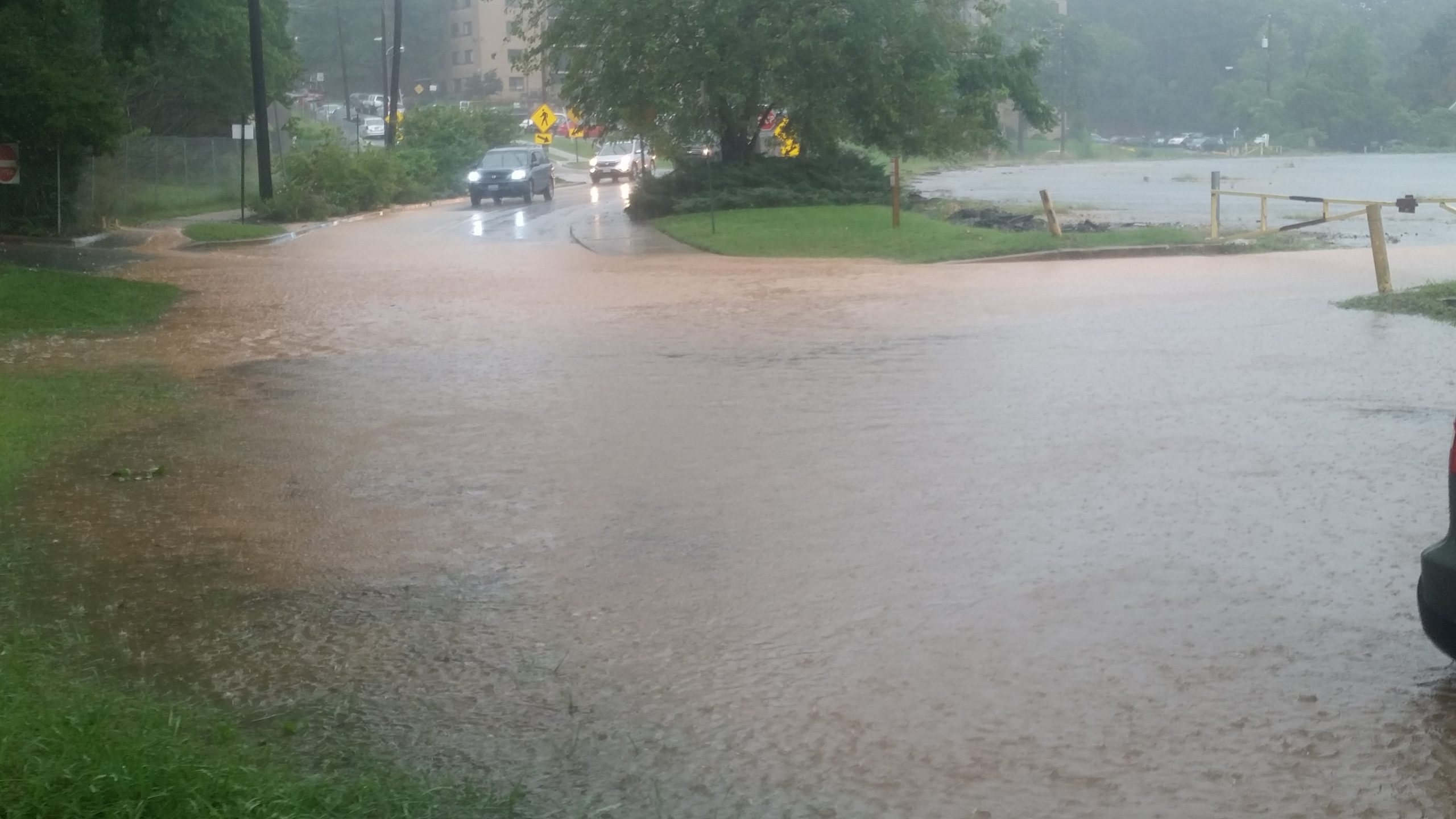 The road between the upper lot and the lower lot during a heavy storm in September 2020. Photo credit: Greg Smith
Hyattsville

A rusty chain link fence separates the playground in Hyattsville’s largest city park from a big stretch of asphalt, about four acres of former parking lot.

Though a gate to the playground is welded shut, someone tore down a 6-foot stretch of the fence. A shiny new panel of fencing is propped near the gap, ready to be installed as a patch.

On the hill across the street from the parking lot, where an office building once stood overlooking the park, cone-shaped piles of dirt and crushed rubble have sat undisturbed since the summer.

Werrlein Properties, a developer(see, Who is Jonathan Werrlein, anyway?) owns the former parking lot and the hill across the street from it. The City of Hyattsville and a group of residents are disputing Werrlein’s plans for the hill (the upper lot), the parking lot (the lower lot) and a strip of the park along the fence. The park as a whole used to be called Magruder. The city plans to rename it (see Magruder renaming).

Werrlein has already renamed the development from Magruder Pointe to Suffrage Point. In early December, Werrlein filed, and a county planning board approved, property maps that would allow for the eventual construction of 15 single family houses and 16 town houses on the upper lot. The company still plans to build 41 additional town houses on the lower lot, according to an email from Werrlein.

The lower lot development has not progressed further than the conceptual site plan, the first step in a multi-level county approval process.

The city and a group of about 20 local residents have been contesting the development plans in court since the county first approved the conceptual site plan in 2018. A circuit court judge decided in favor of the county in one case in mid-December 2020. That decision is being appealed to a higher court.

Two other cases that object to different stages of the county approval process are progressing through the courts.

This paper has published a half-dozen letters by neighbors, both for and against the project, since it was first proposed in 2017. Many who support the project are tired of living near a vacant site, and look forward to an upscale development in its place.

Some residents who opposed the development initially focused on preserving and reusing the old office building, or on finding a way to replace it with a school there.

Others may wonder why there is still a tussle over the development, now that Werrlein has demolished the building, and the county has announced plans to rebuild the middle school on its current site (see January News Briefs).

Those who object to the plan say it specifies too many houses and not enough parkland. Some have also objected to sediment runoff from the construction and anticipated construction in a floodplain.

The city and a residents’ group object to the county’s rezoning of the parking lot to allow the development, and say that zoning laws do not allow the county to approve the 72 dwellings planned for the site.

The city argued to the court that the county could have approved a zoning change for the developer only if the original zoning were a mistake, or the neighborhood had changed.

In her December denial of appeals by the city and the residents, the judge said that the zoning for the area, which was created by the 2004 Gateway Arts Plan, is a floating zone, defined by the county as “intended to permit specialized development of land in accord with a comprehensive plan.” The court said that the Prince George’s County Council, sitting as the District Council, had wide authority to change zoning and uses within a floating zone.

The circuit court’s decision is being appealed to Maryland’s Court of Special Appeals.

The county zoned the 3.98 acre parking lot as open space in 2004, explicitly to create “opportunity to expand parkland.”

The approved development plan and its housing density calculations are based on 4.66 acres of land in the lower lot, rather than 3.98.

This is because the lower lot of Werrlein’s property includes not only the parking lot, but also a strip of the park on the other side of the parking lot fence, a strip which has been maintained as parkland since the park was created, according to testimony opposing the plan submitted to the county planning board by resident Maureen Vosmek.

That strip of parkland, according to James Chandler, Hyattsville’s director of community and economic development, is a small portion of the 1.8 acres of land that Werrlein agreed to sell to the city for a low price. He said that Werrlein will be obligated to deliver the property graded and seeded, and that the city will then determine how to integrate it into the park.

A prior proposal to put a large stormwater facility in the park has been scrapped in favor of micro-retention facilities throughout the site, according to Chandler.

What about the sediment runoff?

Jonathan Werrlein, managing partner, says the company uses “site silt fencing and stormwater inlet protection devices.” City code enforcement cited Werrlein for a violation in January 2020 related to sediment washing into the city’s rain garden and the drainage along Gallatin Street, according to records obtained by the Hyattsville Life & Times, though that violation appears to have been resolved in February through construction of a silt fence.

The county briefly ordered Werrlein to stop work on June 12, 2020, after pictures of sediment flooding a street after a rainstorm circulated on a local email list.

Local environmentalist Greg Smith says he has made exhaustive attempts to obtain information from the county on any violation that may have led to the shutdown, and on the resolution that allowed work to continue.  He says he has received no substantive response.

So is the development stalled now?

Jonathan Werrlein said in a Jan. 8 email that work on the development has never stopped, and is now in an engineering and permitting phase. “Once we obtain the grading permit in the next couple of weeks, grading will start immediately,” he said. The grading, according to Werrlein, will improve stormwater management, and keep some contours of the original terrain.  “Immediately after grading the home building will start on the lots that face 41st Ave,” said Werrlein. He expects that to happen in late winter or early spring of this year.