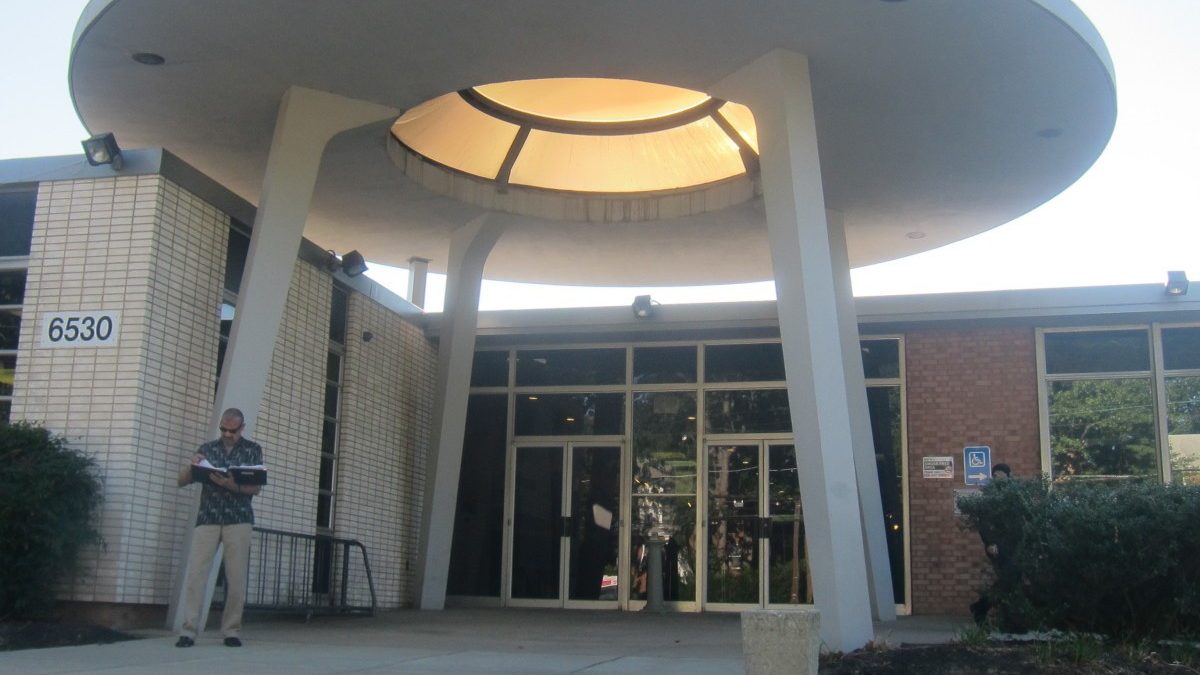 Is the Hyattsville library saucer a relic of the Cold War or an essential part of a new library? Photo by Susie Currie (September 2013)
Hyattsville

BY SUSIE CURRIE — Plans are underway to demolish the mid-century Hyattsville branch library and replace it with a $14.3 million state-of-the-art facility that may — or may not — include the iconic flying saucer stationed outside the main entrance.

Prince George’s County Memorial Library System (PGCMLS) officials are working with the Calverton-based architecture firm Grimm + Parker, which specializes in library design, on plans for the building, located at 6530 Adelphi Road. Design work will be completed next year, with construction expected to begin in 2015.

In August, about 65 people gathered at the library for a glimpse of its future. Architect Melanie Hennigan presented a slideshow of Grimm + Parker’s recent library projects, featuring glass walls, soaring ceilings, banks of computers, laptop workstations, interactive children’s areas, even cafes and fireplaces.

When several people at the meeting asked whether the saucer would remain, Hennigan was  noncommittal.

“It’s a challenge,” she said. “It’s definitely too big to be used inside. It’s a monolithic piece, not something that you can pick up and move easily. It would be very expensive to do that.”

Public support for keeping it at 6530 Adelphi Road, where it has been since the library opened in 1964, has been largely unwavering. Within days after the meeting, the saucer had its own email address (hyattsvillesaucer@outlook.com), Facebook page (Save Our Saucer), Twitter account (@HVLsaucer) and line of coffee mugs and T-shirts.  Several online commenters have pointed to its historical significance as one of many saucer-like architectural features incorporated into American buildings during the Space Race.

Library officials, though, are less attached to it.  “My biggest concern is that the architect said [moving] it would be very expensive,” said Catherine Hollerbach, area manager for the Hyattsville, New Carrollton, Bladensburg and Mount Rainier libraries. “I’d rather see the money spent on books and materials.”

PGCMLS director Kathleen Teaze agreed, adding, “How much damage would be done to it if we tried to move it?”

During the public meeting, another common concern residents voiced was that the collection not be downsized. The library, which opened with 80,000 items, had grown to 226,000 by 2010. Teaze asked that the collection be “weeded” in the hopes that less-crowded shelves would result in increased circulation.

“In the library world, you expect that a third of the collection will be circulating at any given time. But at the time it was more like a quarter. When you reduce crowding on the shelves and get rid of books that are dirty or torn, circulation goes up.”

Hollerbach says that since that time the ongoing weeding has whittled the collection down to about  193,000 items, and she expects that number to decrease before the move.

“The collection will be a little smaller, but we will have weeded out books that are in bad condition or have outdated information,” said Hollerbach. “Also, we’ll look at duplicates. We’re spending a lot of money on databases. It doesn’t make sense to have books on, for example,  car repair when you have an identical database that is much easier to use.”

“We’re librarians,” said Hollerbach. “We love books. We have no plans to decimate the collection.”

Still, technology will undoubtedly play a bigger role in the new branch than in the current one.

“What we really want is a building that will serve the community now and in the future,” said Teaze. She said that the number of computers could double and there will be “as many outlets as possible” for laptop users, as well a dispenser similar to one used now for DVDs, that will provide for small laptops and tablets for use in the library.

The Hyattsville library is about 41,000 square feet (excluding the administrative offices, which will move to the Largo-Kettering branch). The new one, said Hennigan, will be 39,000 square feet at most, probably all on a single level.

“Technically, it will be a smaller building,” said Teaze, “but the space will be used much more efficiently.  Right now, there is a lot of wasted space. Just look at the ground-floor lobby — it’s basically a big hallway.”

“When you have a big open space, you can plan it better and make it more flexible,” said Teaze. “We’ll be able to put collections together that belong together. We can plan for workspaces rather than squeezing them into spaces they weren’t designed to fit.”

Having the library on one level will allow streamlining of some library functions. The five service desks will be consolidated into one check-out desk and one information desk, said Hollerbach.

The new branch will have both quiet areas and more meeting rooms, and much more natural light, said Hennigan. “We’re passionate about getting daylight into the public areas and staff areas.”

The plan to upgrade the library has been part of the county’s Capital Improvement Plan since 1988. Originally, it was planned as a renovation.

“But once it got closer to becoming a reality, we took a better look at it and realized it was probably better to have a whole new building,” said Teaze. In 1964, she noted,  state-of-the-art meant having a dumbwaiter to take books between levels, whereas now  it means adequate outlets and wireless access.

Ward 1 Councilmember Bart Lawrence, who is also a member of Friends of the Hyattsville Library advisory group, said that the public should have been consulted before the decision was made to rebuild rather than renovate.

“I want there to be an open and public decision-making process,” said Lawrence. “I don’t want a couple of administrators making decisions for the community. We’re the ones who will be using it.”

Hyattsville Life and Times, 3 years ago 5 min read
From the Editor

From the Editor: When ‘work bliss’ can lead to burnout

From the Editor: Canines deserve care