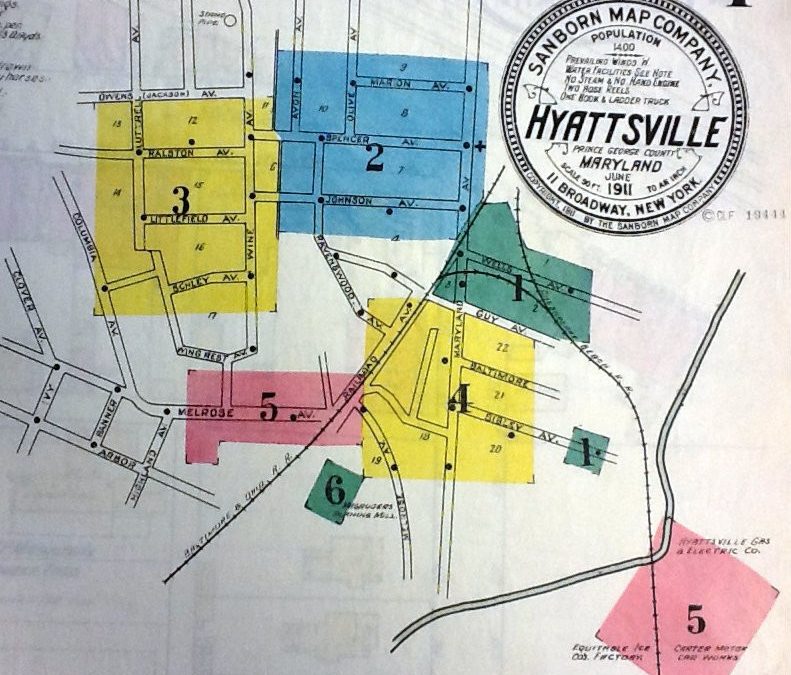 Sanborn Maps were designed to assess insurance liability, but have become an important tool in historical research. Photo by Rosanna Landis Weaver
Hyattsville

Uncovering the secrets of old homes

BY ROSANNA LANDIS WEAVER — More than 50 Hyattsville residents took time out of the busy holiday season on December 13 to attend “How to Conduct Historic Research on Your Home,” co-sponsored by the Hyattsville Preservation Association (HPA) and the University of Maryland Historic Preservation Program. Though many came for the “how to” presentations, they also heard entertaining stories on everything from duckpin bowling to hydrophobia.

Each of 13 graduate students in Kirsten Crase’s Historical Research Methods course was assigned in September to research a historic property in Hyattsville. They presented biographies of the homes, which dated from between 1865 and 1928, complete with slide presentations.  Many students shared contrasting photos, such as the same intersection or the same building shot a century apart.

As the stories unfolded throughout the evening, attendees heard tips on how to conduct similar research. Most homeowners should start with historic deeds.

“Deed records give you names, which are a tremendous asset” for any other sort of research, noted Ethan Cohen, who researched 5006 42nd Street.

The Hyattsville Preservation Association website has a section on property research under its resources tab that walks one through that process.  Deeds can be confusing though, since several streets in Hyattsville have had multiple names. The last series of major renaming took place in the 1940s — Littlefield and Wine became Farragut and 42nd, for example — frustrating some returning World War II veterans.

The recorded tax value of a property over time, available at the Maryland State Archives in Annapolis, can provide insight on when properties were built or improved. For example, Stephen Neuhauser, who researched 5004 42nd Street, discovered that the reported value jumped from $250 in 1907 to $2,050 in 1908, suggesting that the house was built sometime between the two assessments.

Another often-mentioned resource: the Sanborn Fire Insurance maps. For decades, beginning in the late 1800s, the Sanborn Company created these maps to help estimate fire insurance liabilities.  An original color-coded map (copies of which can be found in the Maryland Room at the university’s Hornbake Library) provides detailed information on home building materials (yellow for frame house, pink for brick).

Students also diligently reviewed census records. Matthew Grooms, who researched 4107 Farragut Street, described census records as the “single most valuable resource” in learning about past families that lived at the property.  He noted that such records allowed him to determine “the occupation of my property’s owners, the composition of the family, their levels of education, whether or not they owned property and their ages.”

Census records are only public through 1940, however, and are only available online via academic institutions and paid subscription services, such as Ancestry.com.

At the Hyattsville branch library, the Maryland Room has not only census data, but also wills and estates, city telephone books, and birth, marriage and death certificates, among many other resources. If you have a Prince George’s County library card, you can also gain online access to an extensive database of newspapers, which were also cited as an important historical source.

In addition, the Chronicling of America website, run by the Library of Congress, also has digitized, searchable versions of over 800 newspapers covering 1836 to 1922.

Some students shared entertaining or quirky trivia they uncovered this way. Who knew, for example, that Joseph Costinett, whose family lived on 40th Place from 1919 to 1959, played a major role in the rejuvenation of duckpin bowling as a competitive sport? Or that in 1912, 13 Hyattsville residents sought treatment because they had drunk milk from a cow that subsequently died of rabies? “Never before has Hyattsville been so wrought up over a matter,” declared the Washington Herald.

One theme in the evening’s presentations was the interaction of Hyattsville with Washington, D.C.,  as it evolved from country retreat to suburb.  The District as a source of employment opportunities was dependent on transportation. For example,  Kristen Fox  found a 1919 advertisement for 4914 42nd Avenue that noted the home was “two blocks from electric cars.”

A different form of transportation mapping proved useful to another student, who found an 1896  bicycle map of DC that included portions of Hyattsville. At that time, bicyclists weren’t looking for  bike paths through parks, but for maps that illustrated the degree of steepness and the quality of the roads.  Given the bikes of the day, dirt roads of mud and ruts could easily strand a bicyclist.

“The evening piqued my interest,” said Hyattsville resident Kevin Oakley, attending his first HPA event. “I’m looking forward to doing some research on my own home.”

NEW DETAILS: College Park will be home to Franklin’s Grill and Oyster Bar