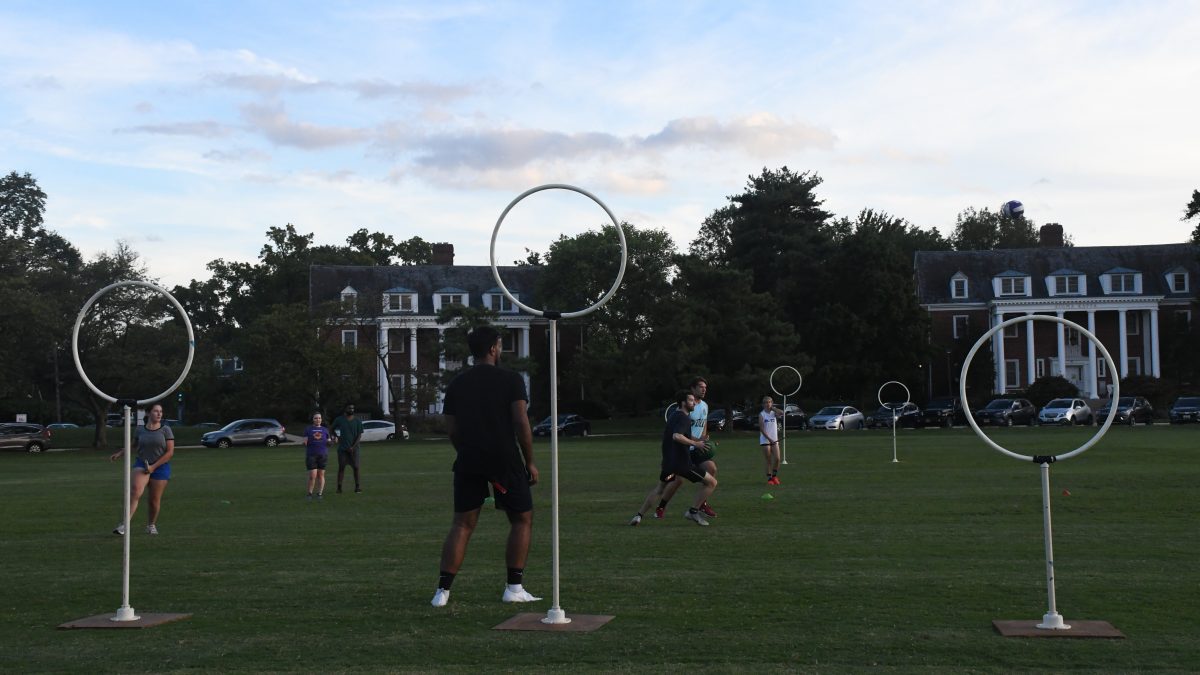 UMD’s quidditch team has all the magic

If you’re headed past the Fraternity Row fields on Monday or Wednesday evenings, you’ll probably catch a glimpse of six white hoops towering over the grass. If you squint, you may see that there are people throwing balls of various sizes through the hoops — and that those people are riding on what look like broomsticks. You might shake your head, rub your eyes and think you’re just imagining a quidditch scene from Harry Potter. But what you’re seeing is reality: it’s the University of Maryland’s (UMD) quidditch team.

“If you want to play a full-contact sport and have a lot of fun, I’d say that quidditch is a pretty solid choice,” said Surmud Jamil, president of the team.

Quidditch is the game from the Harry Potter books, but it has become so much more than that. U.S. Quidditch (USQ) was founded in 2005, and universities and colleges all over the nation abide by the organization’s rules and play in their tournaments. According to USQ’s website, the sport is a combination of lacrosse, dodgeball and rugby.

Playing quidditch has become a sport for anyone, not just for the lovers of the book series.

“At the beginning, it was very Harry Potter, you were on an actual broom and not just a pipe, but over time they [USQ] kind of distanced themselves from that,” said UMD Quidditch captain Heather Farnan.

Although quidditch has become more than it’s connection to Harry Potter, many people still know it only from the books and movies. According to Farnan, interested players will sometimes show up not realizing it’s a full-contact sport.

“Some people come out and they aren’t expecting to get rocked, or wrapped up and tackled,” said Farnan. Others will show up who haven’t read any of the books or seen the movies.

Farnan has played quidditch at UMD since she was a freshman. Now a senior, she has seen the team undergo a lot of changes since she first joined.

“Back when I was a freshman, there were 20 people at practice, consistently. It was kind of a different atmosphere,” she said.

The pandemic impacted UMD Quidditch, taking away the team’s ability to practice — they stopped practicing in spring 2019 and were online until early this September. Recruiting new players became very challenging, too.

During the pandemic, the university’s quidditch team became national champions. Since Nationals were cancelled, USQ hosted a Quarantine Cup, which was a simulation bracket. Teams provided stats to a computer system which then ran simulated competition — and Maryland won. In previous national competitions, UMD had not passed the final round of four teams.

Becoming simulation national champions didn’t entirely erase the difficulties of how to sustain the sport during the pandemic. While the team did find ways to connect virtually, Farnan talked about the challenges of online recruitment and retention.

“The main thing we did as a team, during COVID[-19], when we couldn’t practice, was film [review] sessions. We’d all hop on Zoom and watch films from old games, either that we played or between two teams that are really good that we wanted to learn from,” said Farnan.

With three practices weekly, the team is now gearing up for a tournament in October and is actively looking for more players.

“This is going to be a big rebuilding year. Probably a year with a lot of upsets at tournaments,” said Farnan. She is confident that UMD Quidditch will be strong enough to qualify for Nationals this year.

“Honestly, I joined the club as a joke. I liked Harry Potter, but I had no idea how quidditch would work in real life,” Jamil said. “The idea of playing with brooms seemed kind of goofy to me until I decided to go to a practice.”