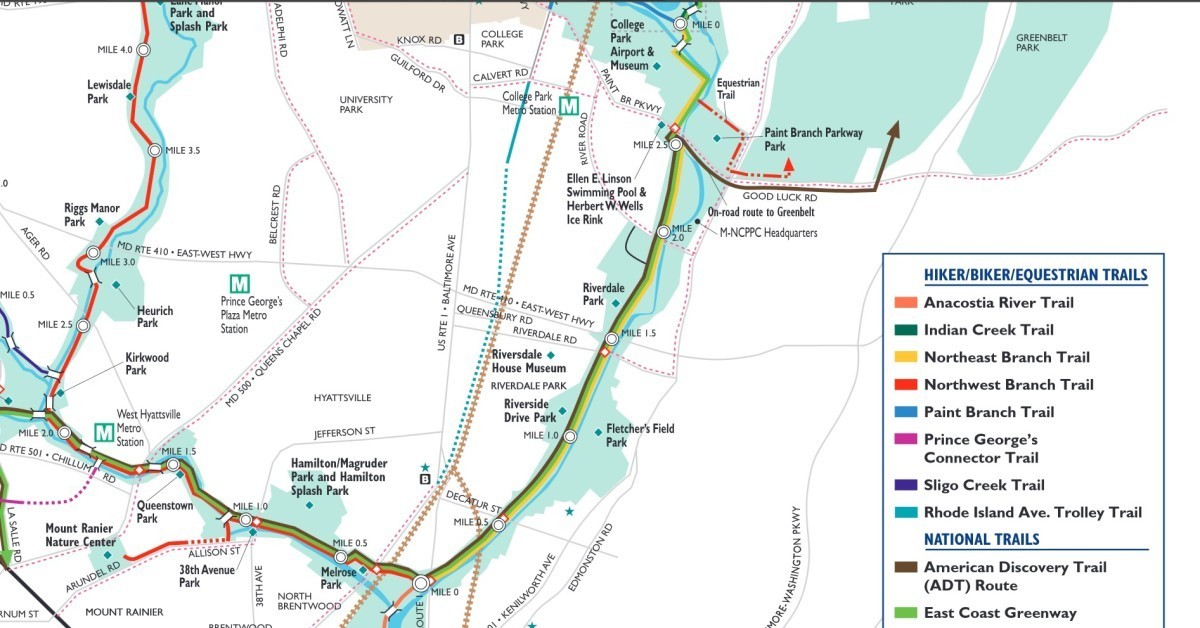 The Rhode Island Trolly Trail will connect existing trails in Hyattsville and College Park.||Several elected officials from the city, state and county gathered to break ground on a trail that will connect
Beyond Hyattsville

BY SUSAN HINES — Despite the sudden chill in the air, the mood at the October 23 groundbreaking for the long awaited Rhode Island Avenue Trolley Trail was one of warmth and mutual triumph.  Converting a former streetcar right-of-way that extends from the District to Laurel into a paved pedestrian and bicycle path had become something of a Holy Grail for many in the crowd — citizens, agents of Maryland-National Capital Park and Planning Commission (M-NCPPC), and elected officials alike.

A segment of the paved bicycle and pedestrian path from Albion Street to Greenbelt Road has existed in College Park for several years. Recently, bike lanes have been added to Rhode Island Ave. in College Park providing access from Route 193 to Lackawanna Street.  Until recently, Hyattsville and Riverdale Park were unable to take advantage of the former trolley right-of-way. That changed when Arts District developers paved a quarter-mile section of trail behind the Palette Apartments.

Funded by M-NCPPC, this project will extend that trail in both directions, north to Queensbury Road in Riverdale Park and south to Farragut Street in Hyattsville.  While no formal connection is planned, from Farragut Street it is a quick spin or stroll to Armentrout Drive which provides convenient access to various destinations along the Anacostia Tributary Trail System.

Phase Two will further extend the trail from Queensbury to Tuckerman in Riverdale Park, allowing residents to avoid the busy intersection of Route 1 and East-West Highway. Hyattsville and Riverdale Park have jointly committed to monitoring and maintaining the trail.

The ceremony took place in Riverdale Park near the old trolley depot that houses the Archie Edwards Blues Foundation. Guests included all of Hyattsville’s state representatives, including Sen. Paul Pinsky and delegates Anne Healey, Tawanna Gaines and Alonzo Washington.  Also among the “Honorables” were county councilmembers Eric Olson (District 3) and Will Campos (District 2) as well as mayors Vernon Archer (Riverdale Park) and Marc Tartaro (Hyattsville). Presiding over the event was Prince George’s County Planning Board Chair Elizabeth Hewlett,  who made sure that supporters were acknowledged whether they were speaking from the podium or not.

Interrupted by the roar of incoming and outgoing commuter and freight trains, the speakers universally hailed high level of collaboration between multiple agencies and jurisdictions necessary for the project to move forward. Acknowledging the slow pace of development, Olson called the groundbreaking “an incredible day, one that many thought would never come.”

Archer reminded those in attendance that the idea for a trolley trail surfaced in Riverdale Park in the late 1990s. At that time, the concept received a surprising amount of negative pushback from residents. The mayor heralded the changed atmosphere along the now-booming Route 1 corridor as one of “warmth and neighborliness,” and a growing recognition that the various municipalities are “tied together.”

The local cycling community was also out in force.  Hyattsville’s own Chris Militello, co-owner of Arrow Bicycle, was there, along with Mount Rainier resident Phil Koopman, proprietor of D.C.’s BicycleSPACE, and representatives of the Mount Rainier Bike Co-op. For Militello, who toured the proposed and fully funded site with officials six years ago, the slow speed of progress has been frustrating.

Reflecting on the speechifying, he said, “Everybody mentioned the health and community benefits of the trail. Nothing was said about the economic impact. Yet, it is clear when you enter or exit Franklins of a Friday night that the ability to bike or walk to local businesses can be an economic driver. This trail is going to open up these opportunities even more.”

Ultimately, the Riverdale Park section will connect to the College Park trail creating a contiguous 3.9 mile route. However, completion of a key portion along the Cafritz property is dependent upon the developers for construction.   A recent County Council vote moves Calvin Cafritz Enterprises’ efforts forward, along with hopes for faster completion of the trolley trail. Completion of the Cafritz section would allow Hyattsville and Riverdale residents to take advantage of the new upgraded bike and pedestrian crosswalk on Paint Branch Parkway that connects to trails leading to Lake Artemesia.