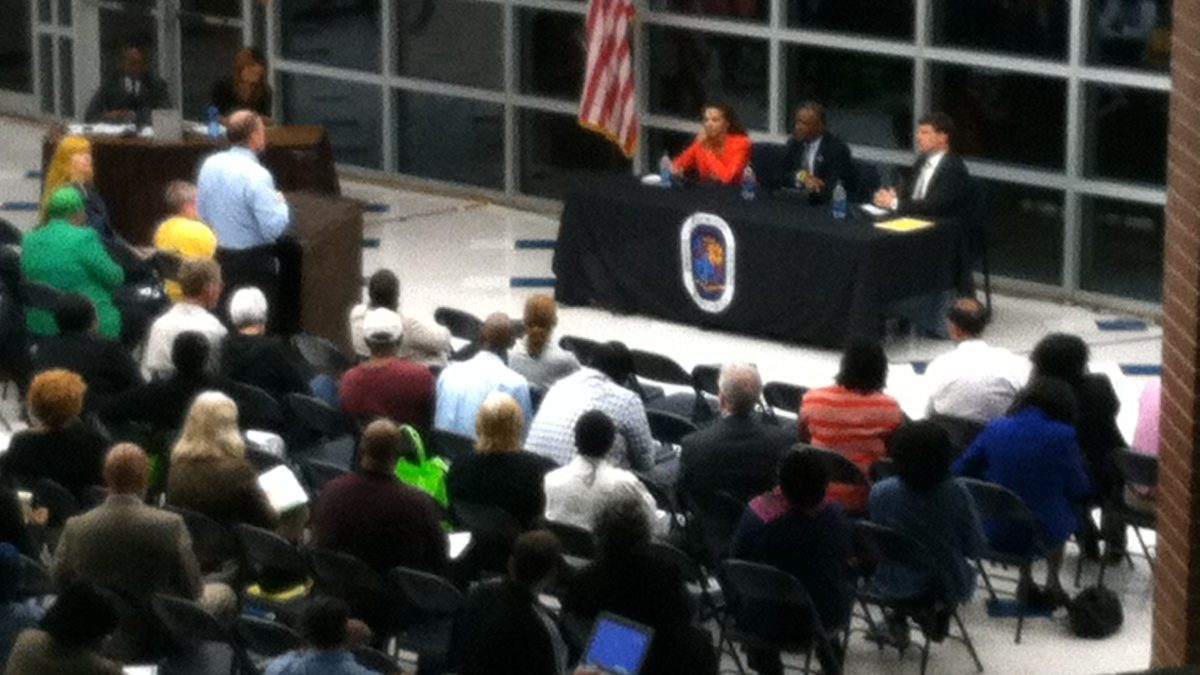 BY CAROLINE SELLE – On September 30, over 70 people attended the first of three legislative listening sessions to be held by County Executive Rushern L. Baker III for Prince George’s County residents. The session, which began a half hour later than scheduled at 7:30 p.m., was took place at Northwestern High School in Hyattsville, Md.

In his brief opening statement, Baker noted that “This is new for the county executive office.” He then turned the floor over to residents, who each had three minutes within which to call the County’s attention to specific challenges.

Transportation, education, and code violations were mentioned by many. One resident asked for more afternoon and late evening bus service; another voiced concerns about noisy train horns in Hyattsville. Susan Flashman of Mt. Rainier asked for the County to reconsider its ban on pitbulls, suggesting that the law has outlived its usefulness.

Instead, she proposed, “I think the county needs a dangerous dog law,” which, instead of being breed-specific, would apply to any dog that bites.

Flashman also asked officials to look into the potential implications should the FBI move its headquarters to Greenbelt. “I’m a union worker,” she said, “and I want to see more union work in town.”

Chris Melendez, chair of the Citizens Action Committee of Bladensburg, spoke of her concerns about a planned restaurant whose permits suggested that it “could be a mega-club,” she said.

Doors opened an hour prior to event’s beginning so that residents could peruse tables staffed by a variety of Maryland government agencies, including the Maryland-National Capital Park and Planning Commission and the Maryland Department of Agriculture.

We wanted to, “give you a chance to actually engage with the government,” Baker told the crowd.

Employees were on hand to answer questions about code violations, social services, and safety.

After each attendee spoke, Baker asked follow up questions and pointed them to agency representatives who would be able to follow up. Residents were also encouraged to make use of the CountyClick 311 program, “a one-stop call center” for residents that provides answers and assistance for non-emergency issues.