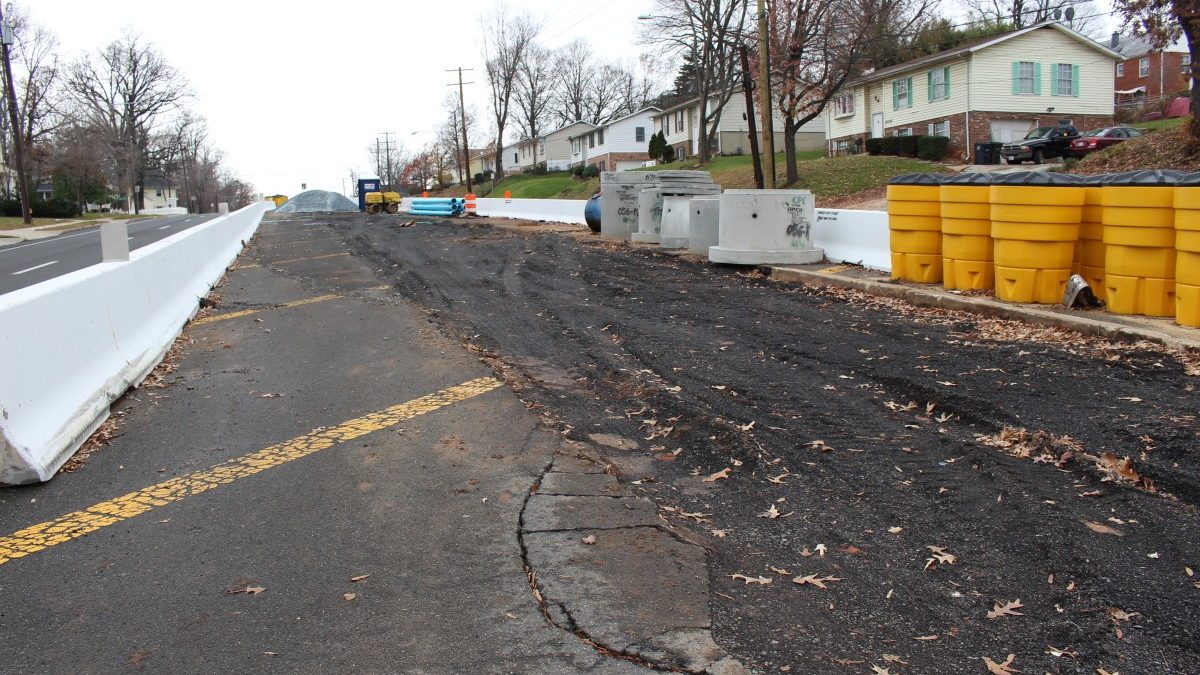 BY REBECCA BENNETT — Cement barriers are already up in multiple stretches of what the Maryland State Highway Administration (SHA) is calling a $10.6 million “streetscape” project along Queens Chapel Road (MD 500).

“Currently, 23,550 vehicles travel this section of Queens Chapel Road each day, with traffic projected to increase to 31,200 vehicles per day by 2030,” SHA said in a November press release.

In the Community Safety and Enhancement Project, which spans Queens Chapel Road between Hamilton Street and East West Highway, SHA promises a number of improvements to address vehicle traffic and pedestrian safety. SHA said the project will convert the existing painted strips into grassy medians with landscaping.

Pedestrian safety enhancements will include sidewalk and crosswalk improvements, as well as the installation of audible pedestrian signals. There will be an estimated $343,000 spent on lighting improvements, and bike lanes are to be installed outside of the traffic lanes, which is in accordance with SHA’s Policy for Accommodating Bicycles and Pedestrians on State Highways.


In a presentation to the city council in December 2012, SHA said the plan extends the grassy median across the intersections of Oliver Street and Manorwood Drive. Renderings show that this will limit access to and from northbound MD 500.

“Current staff is aware of the concerns of residents and Council Members and is appreciative of their insight,” City Administrator Tracey Nicholson said, encouraging residents to continue to provide iput. “Any upgrade to existing infrastructure in the City can be beneficial.”

SHA said drivers can expect changes to  traffic patterns during construction. The northbound right-turn lane from Queens Chapel Road to Hamilton Street is presently closed. SHA expects crews to complete the current drainage improvements in 2015, after which similar improvements are planned for southbound MD 500.

SHA originally told the city that a double left-turn lane from MD 500 onto Belcrest Road was not possible because the intersection was not wide enough, according to a January 2014 meeting with city, county, and state representatives. However, the November press release says the double turn lane is to be included.

The city also requested a traffic light be installed at the intersection of Queens Chapel Road with Nicholson Street, however, that will not included in the project. The Maryland Manual on Uniform Traffic Control Devices states that there are nine factors that determine whether a stop signal is warranted, according to SHA Community Liaison David Buck.

“The most recent crash history, traffic counts, prevailing speeds, delay study, and sight distance were used in the study,” Buck said. “A review of the crash history did not indicate a collision history correctable by installing a signal.”

SHA said they expect the entire project to be completed by late fall 2016.