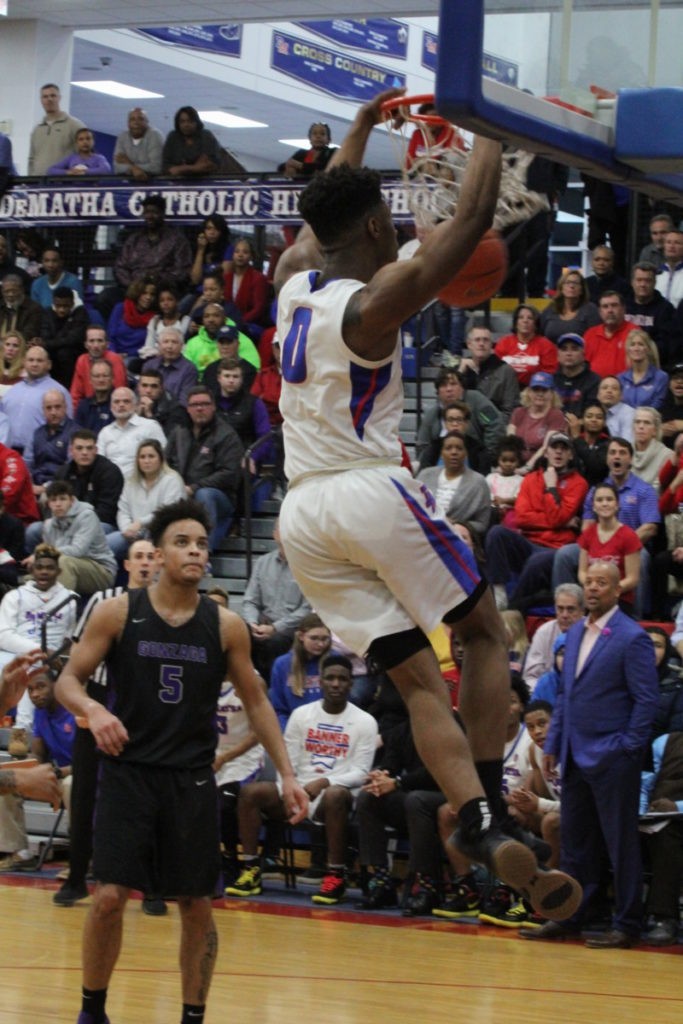 Hyattsville Life and Times, 2 years ago

By CHRIS McMANES — Elijah Hawkins doesn’t have to score a lot of points for No. 1 DeMatha to succeed. He does, however, tend to score when his team needs a big basket.

Hawkins punctuated a game-defining 12-o run with a 3-pointer to help lead the Stags to a 60-50 victory over then-fourth-ranked Gonzaga at sold-out Looney Convocation Center on Friday night.

The Stags added another win Sunday, 88-74 at Bishop Ireton, to improve to 23-2 and 15-0 in the Washington Catholic Athletic Conference. They have won 19 in a row.

Terrance Williams, who will play with Dickinson next year at Michigan, scored 11 points, including the 2,000th of his career.
DeMatha, behind most of the night, took the game by the jugular early in the fourth quarter. Trailing 42-39, Jordan Hawkins turned a Dickinson pass into a 3-pointer. Ward converted a 4-on-1 fastbreak, Timberlake scored on a finger roll and popped a short jumper.

Elijah Hawkins concluded the scoring outburst by draining a top-of-the-key triple to give the Stags their biggest lead of the evening, 51-42, with 3:14 to play. After Harris ended Gonzaga’s 4½-minute scoring drought with a pair of free throws, Hawkins sank a pair of his own.
“I felt like we were in a slump,” said Hawkins, whose playing time was curtailed by three early fouls. “We were sluggish the whole game. We had to get back to the regular basketball we were playing the whole year.”

The outcome was still not decided as Harris dropped in a trey to pull his team to within 53-47. Timberlake, at the 2:06 mark, beat two defenders along the baseline for a reverse layup. In the final minute, he blocked a short driving layup attempt by Harris, and Dickinson made all four of his free throws.

The Stags, who trailed by three at halftime, outscored the Eagles 21-10 over the final eight minutes. Gonzaga (18-9, 12-5) appeared to be more winded in the fourth quarter than DeMatha, which used nearly every one of its healthy players.

“I know sometimes people look at me like I’m crazy playing so many guys, but our players really work hard every day. We’re not just a team this year, we’re a program,” said Jones, who enters the week with 491 career victories. “All of the experiences that our younger guys are getting this year in these types of environments is going to help us going forward.”

Hawkins thinks the Stags’ depth played a role in the win: “We have a lot of players who can play. [Gonzaga] usually plays around seven people. So, they were playing the whole game. We’ve got a lot of talent, so we use our whole team.”

Hawkins also made some key plays in the Stags’ six-point triumph at St. John’s. Leading by one late, the 5-foot-9 junior found Timberlake for a 3-pointer. With 1:05 remaining, his floater restored DeMatha’s four-point advantage. It was his only basket. In the Red and Blue’s 70-67 win at Gonzaga on Jan. 13, he contributed nine points and five assists.

“Going into this season, a lot of people were questioning whether we could get it done because of our point guard,” Jones said. “I think Elijah has done a tremendous job making sure we’re the team we are. He deserves a lot of credit.”

Check out these game highlights from Capitol Hoops.

Closing out the regular season – DeMatha, which has played the least amount of WCAC games (15), has five conference tilts this week. After St. John’s, the Stags travel to O’Connell (Wednesday), McNamara (Friday) and No. 3 Paul VI (Sunday) before finishing at home Feb. 17 against Good Counsel. Because of the Presidents Day holiday, game time is 4:30 p.m.

The O’Connell and Good Counsel contests were rescheduled following the death of longtime DeMatha Coach Morgan Wootten. The game at Paul VI will be its last regular-season contest in Fairfax, Va., as it is moving to a new campus.