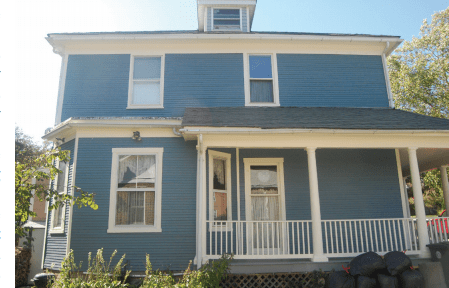 Everyone knows the blue house on the corner of Queensbury and 41st Avenue.  Last summer, when the Bradleys, who own the 1903 home, had their house primed in white, worried neighbors interrupted the painters to ask if they were changing the color.  They were relieved to discover that the white was simply a primer. The blue would soon return.

“Almost everybody knows where our house is,” said Clint Bradley, who takes pride in maintaining the beautiful turn-of-the-century property that he and his wife Linda have called home for over 30 years. The Bradleys are the latest addition to a series of families who have contributed to the rich story of the house at 4101 Queensbury Road.

Like many other Hyattsville houses, this one stands on property that used to be farmland. The tract of land known as D. McComb farm had been bountiful; a public auction announcement in 1877 describes the 70-acre farm as having apple and peach orchards, a vineyard, an oak forest, and a house, barn and stable. According to the deed of sale dated October 24, 1890, Alexander Gill sold the land to Mary J. Nichols. Upon her purchase, farm life ended and a suburban development began. Nichols Addition to Hyattsville. as this particular development was known, was born.

In 1899, Nichols sold 1.25 acres of her property to Anna and Frederick Worley. According to his obituary, Worley fought in the Civil War in a Pennsylvania regiment upon the field of Antietam, the site of the bloodiest single-day battle in American history. Tax and deed records show that Worley gave a quarter of his property to his newly wedded son, Daniel, who built the house in 1903. According to census records, Daniel worked for the Treasury Department for a few years and then spent most of his career in the Railway Mail Division of the Post Office Department.

In fact, many residents of the house at 4101 Queensbury Road have been  government employees or members of the armed forces.  “Suburban Towns Become Congressional Colonies,” claimed the Washington Herald in 1921 as senators, representatives and other federal officials began moving into Upper Prince George’s County.

Not only did the men of the house pursue public service, but Mrs. Mary Worley, Daniel’s wife, did as well. As the postmaster of Riverdale from 1925 to 1930, she  joined the ranks of female postmasters 150 years after Postmaster General Benjamin Franklin appointed the first one. Worley had her fair share of excitement during her tenure; in 1930, she was quoted in the Washington Post the morning after the Riverdale post office had been robbed. Fortunately, the loss was minimal, as she  always made prompt daily deposits at the bank.

Granddaughter Louise Dockendorf remembers Worley as a “sturdy soul” who served under presidents Herbert Hoover and Warren Harding. With a giggle, Mrs. Dockendorf added that her Republican grandmother was excused from her duties when Franklin D. Roosevelt was elected.

“Oh boy, she had some spunk to her,” said Dockendorf. According to her granddaughter, when Worley broke her arm in her later years, she said to the doctor, “That is ridiculous. No one in our family ever broke an arm.”

Over the last 110 years, the blue house on the corner has served as a gathering place for friends and family in Hyattsville. The design of the American Foursquare, or Craftsman-style, house has helped facilitate the social lives of the residents. Large overhanging eaves provide relief from the summer sun for company to relax on the wraparound porch. The windows in the dining room were placed strategically to admit the southern exposure. The small raised windows provide light while allowing for privacy during meals. The two-sided staircase gives access between the upstairs and the living room and kitchen — ideal for when children or housekeepers needed to travel to the kitchen without being noticed by guests in the living room. The most beautiful features of the interior, including the warm American chestnut wooden banister, mantle and moldings, are concentrated in the areas where guests can admire them.

According to various newspaper articles, the Worleys were active members of Hyattsville and Riverdale society. They hosted church parties, weddings, and club meetings at the house. In 1917, for example, Mrs. Worley hosted a meeting of the Riverdale Current Topics Club with the riveting discussion points of “Maryland laws” and “divorces.”

Like their predecessors, the Bradleys have enjoyed hosting events including holiday church dinners, family parties, poetry readings, film showings, and book club meetings. Though separated by time, the house acts as a channel that connects the past, present, and future residents. By taking such mindful care of the property, the Bradleys have ensured that the stories of those who came before will continue to be told.

This is the first in what we hope will be an occasional series about the history of homes in Hyattsville. Several homes were profiled by University of Maryland students last fall, but if you have interest in writing a feature about your home, contact rosanna@hyattsvillelife.com.