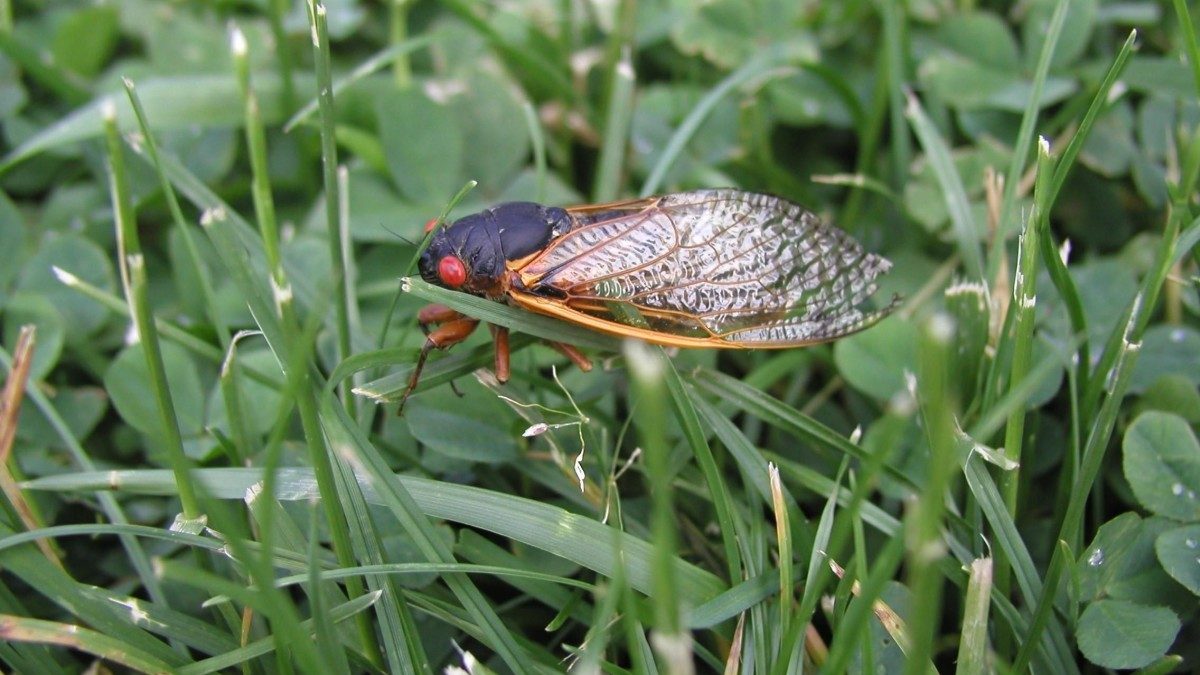 At the time of this writing, the red-eyed nymphs were just beginning to show themselves by creeping up through the soil.  By the time you read this, the molts of the youth (sloppy, like all teenagers), may be all over our trees and the male choruses may have awakened and possibly begun to annoy us.  The red-eyed Brood II crew, viewed by some as edible, may have sung their way into our hearts, driven some of us to near madness, or led some to avoid May picnics, weddings and baseball.

Yes, it’s time for the 17-year cicada invasion, coming soon to a backyard near you if it hasn’t already. When it’s all over, millions of them will have emerged, molted, mated and died, but not without cutting into tree limbs and peppering them with the eggs of their progeny – their way of saying, “I’ll be back.”

When the eggs hatch, the ant-size young will drop into the soil and feed on juices from the roots of the trees for another 17 years.  This does not harm mature trees, but young trees may be stressed by the slicing of limbs and sucking of root juices. (Young trees can be protected with light netting.)  This will be the legacy of Brood II, which last visited states from New York to North Carolina in 1996. This two-to-six-week melodrama will end as the young disappear into the soil that their parents emerged from (until 2030).

Other “broods” of 17-year cicada visited us in 2004 (Brood X), but their range included parts of the Midwest. Their return will be in 2021. Most of the 13-year broods have more southerly visitations.  Amidst this plethora, there are annual cicada that emerge every summer in this area with much less fanfare, but considerable sonic capability. The smaller numbers of the annual cicada make them far less noticed.

Like many young folks, they have often been stigmatized.  In the cicada’s case, it’s with the nickname “17-year locust.”  To clarify, locusts are the ravenous grasshoppers (orthoptera), but our red-eyed cicada friends are “true bugs” (hemiptera) and are relatively innocuous if you don’t mind swarms and loud music all the time for two weeks or so.

They don’t bite, sting or eat our veggies. The major hazards are that their sheer numbers “freak out” folks and our pets may devour too many and clog up their digestive tracts.  Brides at outdoor May weddings sometimes get resentful, but there are wedding planners who have learned to schedule around them or provide alternative venues. The adult cicadas like May for weddings too, but die after the honeymoon.

There are also three species of 13-year cicada, who also have large brood emergences, but the 17-year cicada usually have the largest numbers of nymphs emerging. The “strategy” that Mom Nature came up with for our 17-year broods is that large emergences ensures the preservation of the species, as many other critters enjoy the swarm buffet.  Moles go after the nymphs as they crawl to the surface; fox, raccoons and our domestic pets munch on the nymphs as they cling to the trees; and birds dine on the adults as they search for mates.

The adult males make the “UFO-sounding” mating call using two vibrating membranes, called tymbals, on their abdomens.  Amplification is provided by air sacs on the body and sound may reach 100 decibels. The “demure” females respond with softer clicks, but get their message across to the male of their dreams.

About 100 species of cicada live in North America, though the 17-year swarms are mostly found east of the Mississippi. Other varieties appear in other parts of the country and made their way into Native American legend. Some Asian and European folklore ties the cicada to immortality and some of the insect cases were used to make a tea to quiet noisy babies.

Modern Americans have occasionally indulged in cicada eating frenzies, suggesting that the insects are low in carbs, high in protein.  Harvesters of the crawling callers suggest collecting them shortly after they emerge (as their exoskeleton has not hardened and they are not as sharp when swallowed.  Recipes are readily available on the internet, though some involve breading – so much for low carbs – whereas others call for sautéing  or skewering.