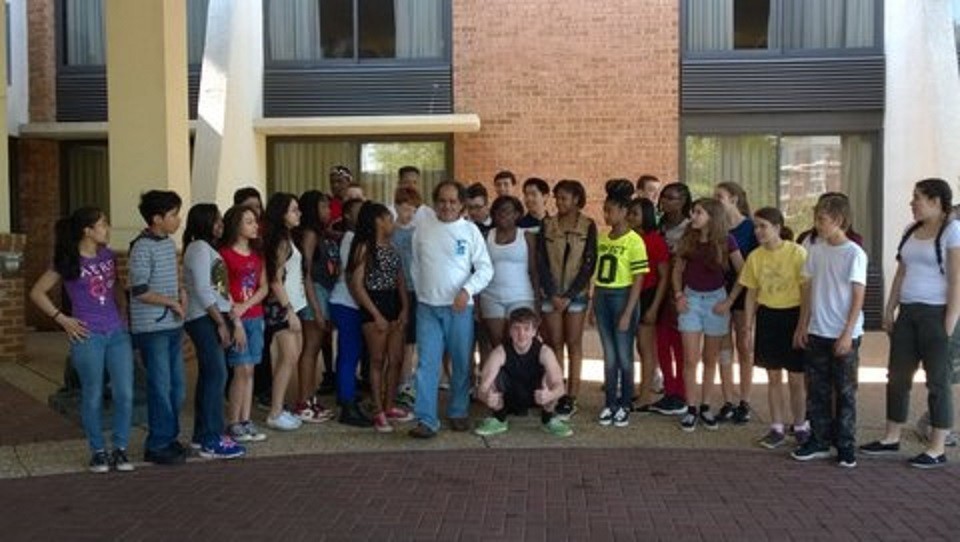 Hyattsville Middle School CPA choir with Michael (center), a refugee of the Syrian Civil War, while at the Fiesta-Val competition in Williamsburg, Va.
Education

The link to the intellectual and psychological benefits of music and music study is already well established. Research has shown that musicians use both sides of their brain more heavily than the average person and that music activates brain regions involved in movement, attention, planning and memory.

In May I chaperoned the Hyattsville Middle School CPA Choir on a field trip to compete at the Fiesta-Val competition in Williamsburg, Va. At our hotel, we met an older man named Michael, who introduced himself when he heard our group practicing before the competition.

He told us it was his birthday and when the kids heard, they spontaneously sang him “Happy Birthday” in four-part harmony. It was beautiful.

When we returned to the hotel at 9 p.m. from the competition, Michael was waiting for our bus. He had gotten off work at 5 p.m. and waited the four hours because, in his words, he liked our group “too much!” Some of the students ran over to him with a piece of cake so he could share in our celebration.

We soon learned that he was a refugee from the Syrian Civil War, which had killed all 15 of his family members. In Syria, Michael had been a successful businessman. Now, he is learning English on the fly while living in America and working two jobs (as a janitor and cook). Michael was so taken with the Hyattsville Middle kids and with their exceptional talent and kindness that he asked to take a picture with the group before we left the next day.

Michael’s story moved the students very much. Choir director Reuben Burrows and the children decided to sing him a song as well, as a surprise. The next morning, Michael was waiting for us after breakfast in front of the hotel. The kids formed a ring around Michael and sang a very moving song called “Run to You.” By the time they had finished, almost everyone was crying: Michael, the chaperones and many of the kids. A number of the kids spontaneously hugged Michael afterwards, and he was so grateful.

It was an incredibly moving, unforgettable experience for all of us.

Incidentally, the choir won more trophies at Fiesta-Val (seven) than ever before and was Grand Champion of the competition. Since then, the students have gone on to win Superior ratings at the highest level of difficulty at the state level and were recently chosen to sing the National Anthem at a Nationals game. Their accomplishments, at such a young age, are astounding.

Yet it was this connection made with our new friend Michael that helped me realize the power of Hyattsville Middle School’s Creative and Performing Arts program in ways I had not even considered before. The choir kids come from all different backgrounds, but through their music, they have connected with each other in a really rare and beautiful way. That is what I saw on the trip to Williamsburg with that man from Syria. They were in harmony, not just in a literal way, but also in a transcendent one. And it is this benefit of the arts in school that has come to matter to me, even more than the many intellectual ones.

University Park resident Christine Dawson has three children, including one graduating from the Hyattsville Middle School CPA program and one child about to enter it.

Hugh’s News: A feast, followed by a fast