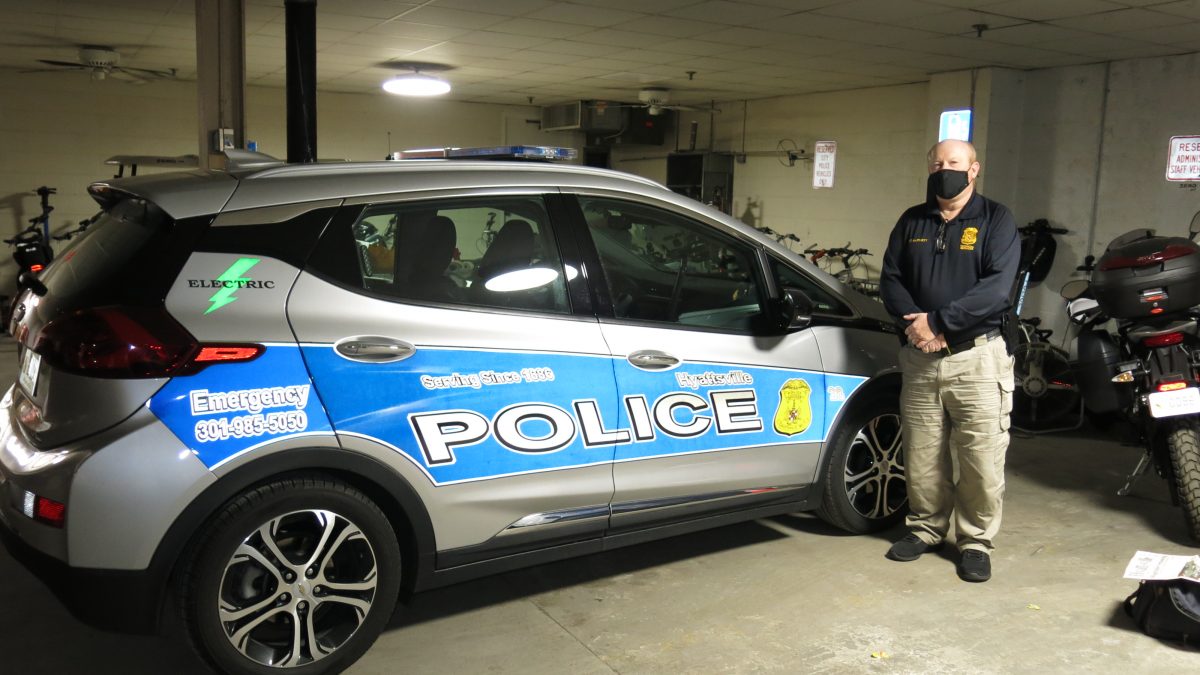 Police cars represent a fascinating balance between the conflicting demands of human-factors engineering, public policy and municipal finance. A short, 2.5 mile drive south from the University of Maryland Police Department (UMPD) to the Hyattsville City Police Department (HCPD) allows us to observe their evolution.

The UMPD has two parking lots. One entire lot is devoted to its Ford Crown Victoria police cars. This large, V8-powered, rear-wheel drive, body-on-frame sedan that struggles to average 18 mpg, is the best-selling Police Pursuit Vehicle (PPV) of all time. When production stopped in 2011, many police departments (including Fairfax, Virginia’s) bought as many as they could get, to drive as long as they could.

“Getting promoted to detective was one of the proudest days of my life,” said Robert Althoff, chief of police in nearby Brentwood. “The only disadvantage was that I had to give up my Crown Vic marked police cruiser and drive my personal car.”

Christopher Holland, deputy director of the Maryland State Police Motor Vehicle Division, agrees that cops love them. “We only have about 50 or 60 Crown Vics left, but whenever I rotate one out of service, the officers always hate to let them go.”

How can a design that originated in the 1980s still have many economic, ergonomic and even environmental advantages over newer cars? Continuous evolution. The Michigan State Police tests PPVs for speed over the quarter mile and for the time it takes to accelerate to 100 mph, and for braking, handling, fuel economy and ergonomics. In 1990, the large Chevy Caprice PPV was the first car ever to win all categories. But it was discontinued in 1996, as GM shifted to manufacturing SUVs. The Crown Vic had 15 more years after that to achieve its Mercedes comfort and Toyota reliability, regularly reaching 225,000+ miles. Their only real weakness is they’re bad in the snow.

But how can towns tolerate the Crown Vic’s fuel costs and pollution?  Well, fleet owners, unlike individual owners, can reduce costs and waste by constantly recycling and reusing their wrecked or broken-down cars and the equipment that may only fit those specific vehicles. If you consider those efficiencies, and then take into consideration the resources used to manufacture a new vehicle, maintaining a Crown Vic fleet starts to look almost like a green alternative. Many have a second life as well, recycled as taxis.

If  the University of Maryland’s aging queens represent the best execution of an old paradigm, the HCPD’s electric and hybrid vehicles point to the future. Hyattsville recently spent approximately $330,000 for six Ford Interceptor PPVs based on the popular Ford Explorer SUV. Three are hybrids. “I am a fanatical advocate for solar power and electric vehicles,” declared Sgt. Richard Harnett. In 2017, this EV-angelist received a grant from the Maryland Department of Energy to test if an all-electric Chevy Bolt could be adapted for police work. He also acquired two all-electric Zero brand motorcycles. “The first worry was range anxiety,” he said. “But the average HCPD car only runs about 50 to 60 miles a shift, and Bolt gets at least 200 miles a charge.”

The Bolt also accelerates faster than most other police cars, but is programmed to top out at 90 mph. Not a problem. Many urban police departments are concluding that the physical and financial risks of high-speed chases usually outweigh the possible benefits.

Harnett believes the greatest advantages of electric police vehicles are dramatically reduced air pollution, and lower fuel and maintenance costs. “Police cars spend most of their time idling,” he said. “That can use up to [a] quarter tank an hour. Gas can cost $50 to $60 a shift. Charging the Bolt costs about $7.50, and running its lights for an hour only costs about 5 miles in range. In four years, the only maintenance has been rotating the tires and replacing the small, 12-volt battery.” Harnett admits the Bolt is just too small for general police work, but believes that the electric motorcycles are far superior to gas models. They get 160 miles per charge and are extremely fast and almost silent.

Harnett is optimistic that the department’s new hybrid SUVs will have much lower lifetime fuel costs. But hybrids require almost the same maintenance as their gas counterparts. In addition, drilling the holes to install the police equipment can create carbon monoxide leaks. The Austin, Tex., police department pulled 400 Ford SUVs off the road until the company addressed this issue.

Let’s hope that Ford keeps its Explorer in production long enough to work all the bugs out and provide a good return on taxpayers’ dollars. Out on the streets, only the strong survive. The big 1990 Chevy Caprice was a great strong police car that’s completely extinct. (The 2011-17 compact Caprice PPVs are an insult to its memory.) Thirty-one years later, the venerable Crown Vic Police Interceptor proves that if a decent design is produced long enough, it can evolve into greatness.

Sparks fly in one local backyard