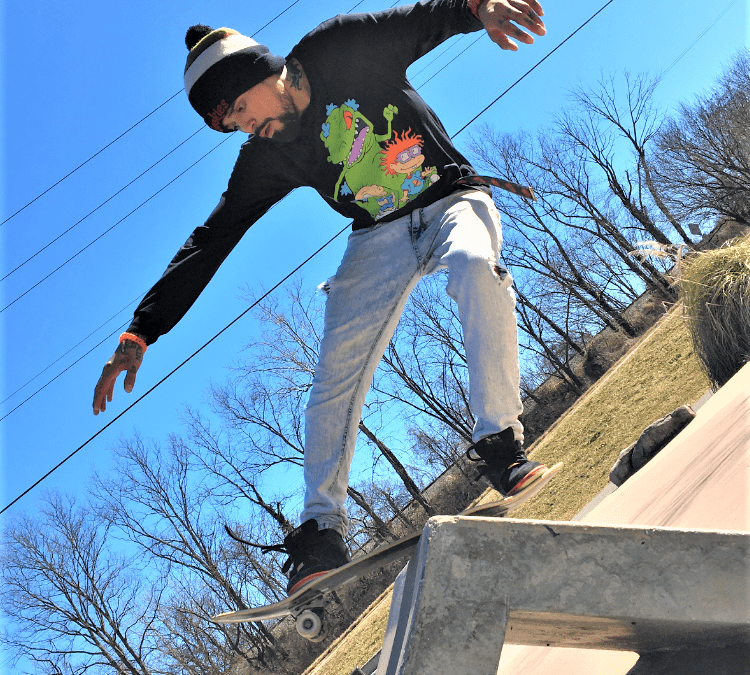 The paradoxical safety in inherent danger

If you compare the Melrose Skate Park to Hyattsville’s other recreational facilities, it looks like a major injury or lawsuit just waiting to happen.

The new children’s playground on 38th Street has a soft, cushioned surface and equipment with carefully rounded corners. So does the new adult fitness center just a few yards away.

The skate park, just a little way down the Northwest Branch Trail from the playground, along Route 1, is made entirely of concrete and steel, with a few big rocks thrown in for fun. Most of the metal has 90 degree edges. There’s a 5-foot drop. The design deliberately includes things parents tell kids not to play on, like railings and stairs.

Even compared to the pool at the Hamilton Splash Park, another place where one could easily slip, fall, or die, the skate park still looks like a much bigger risk for a catastrophic lawsuit. The pool charges admission and is closely supervised by certified lifeguards every moment it’s open. Its high gates are tightly locked every moment it’s closed.

But the skate park has no fees, no supervision, and no fencing. How do the taxpayers who built it survive the financial risks? Why do the skaters seek out the physical dangers, and how do they survive them?

A man who answers these questions every day is John Hunter, executive vice president of American Ramp Company, which built the Mount Rainier Skate Park, in 2009, and Hyattsville’s in 2011. He explained, “First, skateboarding is so popular that if your town doesn’t have a skate park, it becomes a skate park. Second, when you look at the statistics on sports injuries, skateboarding is right in the middle, meaning that it’s a lot safer than football, hockey or cheerleading.” His last answer was the most intriguing: “In addition, we built that park using ASTM standards, and best practices that make it safer for skaters and everyone else concerned.”

ASTM stands for the American Society for Testing and Materials. Most of its skate park standards concern the quality of the concrete surface and how well the steel elements are attached.

But since Hunter mentioned best practices, why is Melrose Skate Park made out of concrete, rather than wood — or even steel ramps that might seem more forgiving? And how come it is free, unlocked and unsupervised?

It’s not because it’s safe. Melrose sees bruises and contusions every day, and sometimes fractures and concussions. That said, the most common skateboarding injury is a sprained wrist. The most deadly is getting hit by a car.

Some of the park’s legal protections stem from being a free municipal facility. Many more derive from the theories of inherent danger and assumed risk. If you willingly participate in something obviously and inherently dangerous, like skateboarding, you assume the risk. Few kids can judge the dangers of a pool, but almost every child knows you can fall off a skateboard.

That’s why building skate parks out of concrete protects Hyattsville and Mount Rainier better than using other materials that might look more forgiving, like wooden ramps, or seem more affordable or flexible, like steel ramps. Concrete is the most durable over time. If a person gets hurt misjudging the height of a trick, that’s an inherent danger. A damaged or unpredictable skating surface is not an obvious inherent danger and is, therefore, more likely to be the city’s liability.

Melrose’s skate park has few rules. The most important are “#1: Skate at your own risk,” and “#2: Use of personal protective equipment is recommended.”  Note the sign does not say helmets required. The 2008 site plans called for a gate, but it was scrapped. Here’s the logic: If you require helmets and someone without one gets hurt, or have a gate, but accidentally leave it unlocked, you can be considered negligent for not enforcing your own regulations. And, facilities that charge admission usually have more responsibility to protect users. Private skate parks always require helmets.

To get a user’s view, the Hyattsville Life & Times interviewed two longtime skaters.

“Danger equals excitement!” said Kenny Guevara, 27, commenting on the park’s construction. He noted that Melrose “is the only playground along the bike trail where you see Black, white and Hispanic people actually playing close together at the same time.”

Guevara was drawn to skating because it is “profoundly democratic,” without so many of the things that make people “feel left out of traditional sports.” He added, “No particular body type gives you an advantage.” And while skating can be ferociously competitive, you can’t get cut from the team.

Elijah Brickhouse, 21, started skating Melrose in 2011 before it was even completed. He said the main way a skater avoids injury is “by picking your level of tricks based on your skills, and working up.”

He also explained some specifics of skating Melrose, saying the layout allows skaters to perfect skills by encountering the same obstacles again and again. Multiple paths through the compact space keep it interesting and demand concentration. Skating the park “improved my reflexes and my reaction time,” he said. And the best part is “it has curbs, handrails, stairs, ledges — everything you need to learn street-style skating.”

This brings us back to John Hunter’s comments about towns that don’t have skate parks becoming skate parks. Is Melrose a little dangerous? Yes. Does it have to be a little dangerous? Yes. If it wasn’t dangerous enough to be exciting, Elijah, Kenny and their friends wouldn’t be skating Melrose. They’d be practicing street style in the street. And using the curbs, handrails, ledges and stairs of your neighborhood wouldn’t be anywhere near as much fun, and it’d be a lot more dangerous.

Music To My Ears

DC Sweet Potato Cake sprouts up in Hyattsville: Bakery to (re)open on Rt. 1

Confronting homelessness during the pandemic