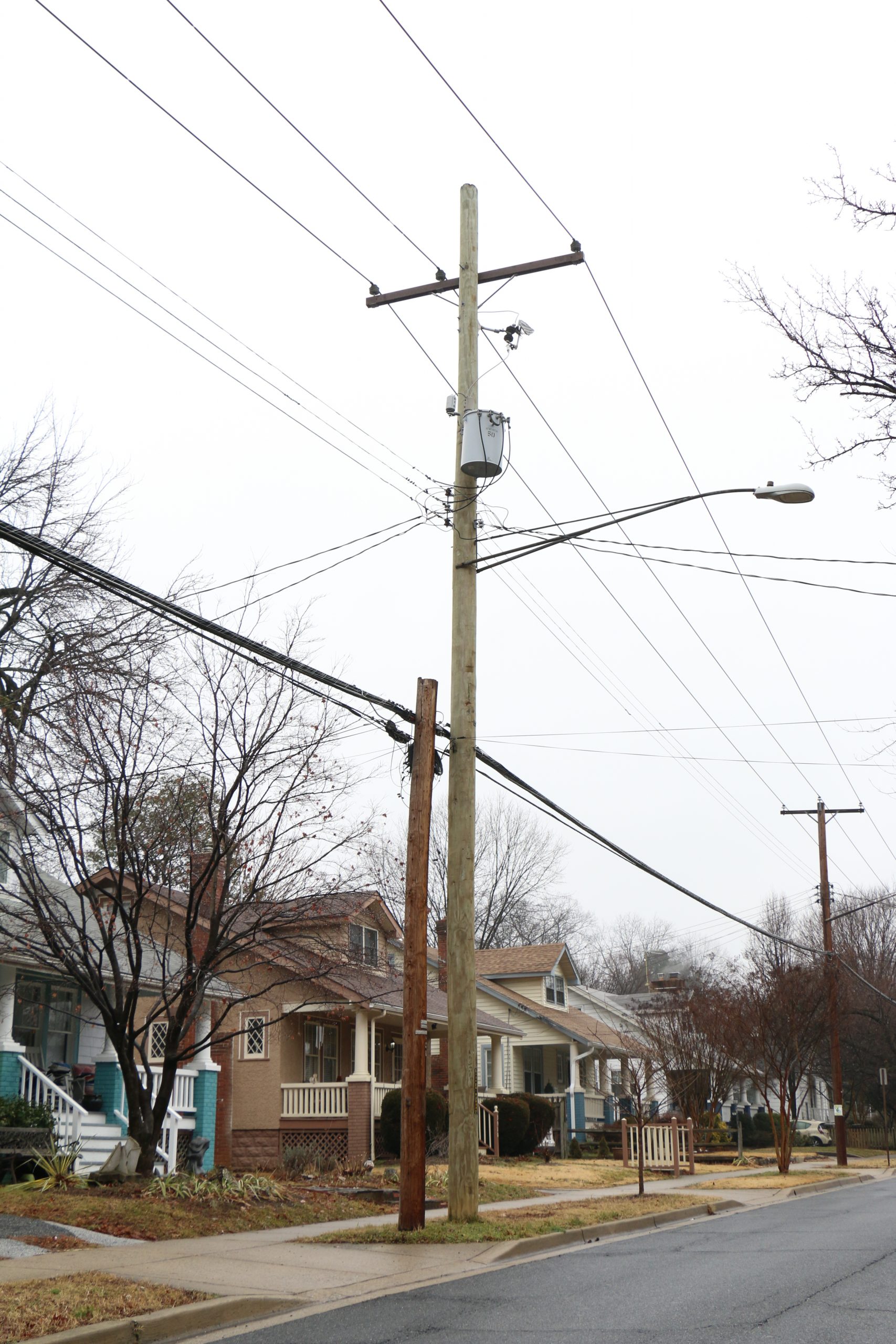 Have you wondered how our community became bi-polar? It’s pretty common to see tall, greenish utility poles next to shorter, brown poles just a few feet away. You didn’t see this in 2010 and might not see it much longer.

Hyattsville residents have a real advantage over people living in downtown Washington, D.C., or midtown Manhattan. Their utilities are buried underground. We’re lucky — we can watch the fascinating upgrades.

Having an overhead grid didn’t always feel so fortunate. In December of 2011, Pepco’s electrical reliability was so bad that Maryland fined the utility $1 million. State Delegate Anne Healey (District 22), a longtime Hyattsville resident, recalled, “The 2012 derecho caused a huge mess. Power was out for about a week during a heatwave. But everyone understood that the derecho was a major, powerful storm. What people in my neighborhood wanted to know was why our power would regularly go out during an ordinary, gentle rain.”

Maryland and the District accused Pepco of neglecting its infrastructure for years. Regional leaders wanted Pepco to remain an independent local utility and only approved its 2016 merger with Exelon because the larger company promised the resources to boost reliability.

According to Pepco, area residents “experienced the lowest frequency of outages ever in 2020,” a 68 percent reduction in outage frequency compared with a decade earlier.

Smart grid improvements are important because the higher voltage electric wires at the top of utility poles are completely uninsulated and prone to temporary faults. The 110-volt lines and the neutral wire connecting poles to residences start off insulated but may become damaged or worn.

The lower sections of the poles may carry traditional copper phone lines, and also carry the amplifiers, batteries, snowshoes and splice-boxes needed to provide high-speed internet through Comcast’s coaxial cables or Verizon’s fiber-optic lines. This equipment adds a lot of weight and stress, particularly during wind or ice storms.

Back in 2010, before Pepco hired more outside contractors to aggressively trim trees, one of the greatest threats was tree branches. Pepco’s power lines running through the greater Washington area were crossing one of the densest and most beloved urban tree canopies in the nation. Even a slight gust of wind could bend a small branch across two energized lines. This would cause a brief, temporary fault that might blow an overhead fuse called a cut-out.

Unfortunately, Pepco’s outdated grid meant that when the power went out, it stayed out for entire neighborhoods until customers complained and a crew was dispatched to locate the problem and fix it. This often took hours, sometimes days.

Stewart noted, “During the last decade, our smart grid incorporated a lot of new technology to increase reliability. Automatic circuit reclosers are a type of circuit breaker that resets itself three times to clear temporary faults. They only stay open after the fourth time. Smart meters let us know exactly where customers have lost power and when it’s restored. And, automatic-sectionalizing and restoration lets us instantly reroute electricity around problems to restore as many people as possible while crews are making repairs.”

Bundling wires and putting in poles

In 2010, most houses connected to utility poles through two insulted 110-volt lines and a neutral wire. At thousands of homes in this area, Pepco replaced the neutral wire with a much thicker bare conductor called tree wire, or strand. Then they wrapped the two hot wires around it for support, creating a single bundle many times stronger than three individual wires.

In Hyattsville, you can see bundled service going to many homes, while the house next door still has three wires. In nearby Mount Rainier, almost 100% of the service is already bundled.

But the most obvious change to the infrastructure was the installation of thousands of new, thicker poles with stronger fiberglass crossbars. It’s easy to see the difference. Older poles are brown and are often gouged from years of workers climbing them wearing spikes. The thickest of these old poles measure about 35.5 inches in circumference, while some are much thinner. In contrast, newer poles are green, pressure-treated wood and are about 43 inches around.

Hyattsville became bi-polar when Pepco installed new poles and quickly moved its electrical lines to the thicker structures. Pepco left the fiber-optic, cable and phone lines on the old poles, but cut the poles off right above those wires. When the other utilities finally move their wires to the new poles, the old ones will be taken down, and we’ll be unipolar once again.

What’s all that stuff up there?

Telephone poles are more accurately known as joint utility poles, and they carry an ever-increasing assortment of wires and equipment. Everywhere in the world, the electrical supply space is always at the top of the pole, with the highest voltage transmission lines furthest up. In this area, a connecting wire sends the current down to a cut-out (fuses that look like light grey hatchets) and then to large cylindrical step-down transformers. These typically send residences two 110-volt lines and a neutral wire. Electric stoves and clothes dryers that use 220 volts draw from both lines. Businesses using large electric motors often have three 110-volt lines and a neutral.

For safety, utilities maintain a three-foot gap between the power supply space and the lower space with communications equipment, which is getting ever more crowded.

To give customers’ a choice of internet service, Prince George’s County offers at least two systems. All the different wires are black to protect the insulation from damaging ultraviolet rays. But Comcast’s coaxial cables require silver-colored amplifiers and grey battery boxes. Verizon’s newer fiber-optic system was installed underground but connects to homes and businesses by coming up the pole and running overhead. It can be identified by horizontal, cylinder-shaped splice boxes and rounded fixtures (called snowshoes) that store extra cable.

Finally, there are still old-fashioned copper telephone lines. Verizon is officially retiring copper phone service in Hyattsville and other areas of Maryland. However, since part of its fiber network was built lashed to copper lines, some of those lines are still hanging on the poles.

Grab your reusable bags, the Hyattsville Farmers Market is back

In Memoriam: An emotional farewell to Hyattsville Elementary teacher