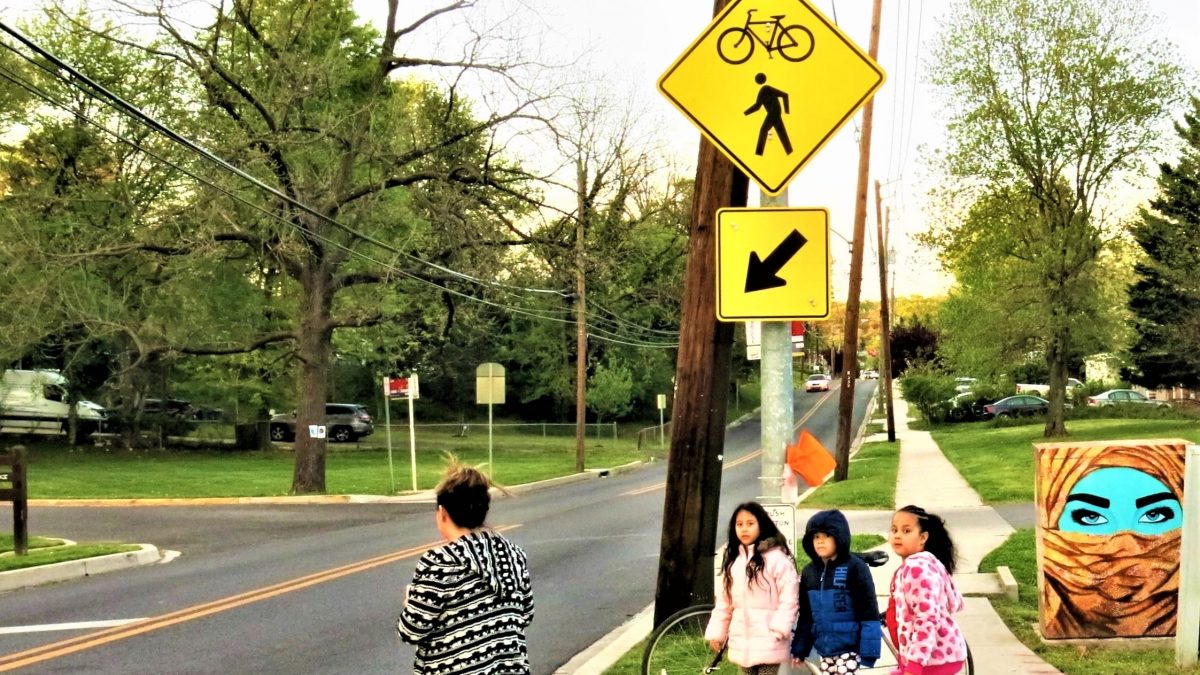 A family at a broken pedestrian crossing. The orange flags are a substitute for working lights. Credit: Paul Ruffins
College Park

According to the Governors Highway Safety Association’s 2019 report, driver and passenger fatalities have dropped 25% since 1978. But just as communities embrace the benefits of walkable neighborhoods, both for our safety and our health, pedestrian deaths have increased by about 60% since 2009. Between 2019 and June of 2020, the rate of pedestrian deaths per mile traveled increased 20%.

In College Park, it’s easy to equate dangerous traffic with students getting hit crossing Route 1. For a few blocks, there’s even a fence to force people to cross only at stoplights. Still, the city routinely receives petitions for traffic calming far from campus.

Kevin Bradley lives near a stretch of Rhode Island Avenue north of University Boulevard that has a 35 mph speed limit and no stoplights. He said, “There have been serious crashes near the shopping center, as drivers race to make the light at Edgewood Road.”  Bradley believes the design of the neighborhood itself creates problems. “The zoning limits the size of driveways, so people have to park on the street. Hollywood Road near 49th Place is particularly dangerous, with narrow streets and no sidewalks.”

Mayor Patrick Wojahn, agrees. “The city was built for cars. We’re surrounded on three sides by train tracks and large roadways. It just wasn’t designed to be safe for walking and biking.” Consider sidewalks: Some blocks have them, some don’t. When these suburbs were created a century ago, many developers wanted to preserve a rural atmosphere. Their vision of the good life didn’t include senior citizens out jogging.

Wojahn says, “When you’re building a new neighborhood, it’s easy to include proper sidewalks or crossings, but it’s very expensive to retrofit an old street.” He cites other factors that favor automobiles. “Gov. Hogan is pursuing projects such as the I-495 expansion that prioritizes cars. Biking and walking have not been his main focus or the main focus of the State Highway Administration.” Critics note that Hogan strongly opposed the Purple Line, and some ascribe its problems to his accepting the lowest bid, which came from a firm not known for engineering expertise.

Technology has largely made things worse for pedestrians. Shopping from home increases the number of delivery trucks on neighborhood streets. Ride-sharing services, which make it convenient not to use public transportation, generate more traffic. Cell phones distract both drivers and pedestrians, and GPS efficiently directs drivers through residential areas when major roads back up.

Theoretically, pedestrian detection and automatic emergency braking systems in vehicles could save lives (though AAA’s testing shows that these technologies often fail to protect pedestrians). But such technologies are not mandatory, and only a small number of newer vehicles have them. And consumers are switching to bigger vehicles; in 2021, 69% of new vehicles sold were SUVs and light trucks. Compared to cars, these vehicles are about twice as likely to kill a pedestrian in a moderate speed accident. Sedans typically hit pedestrians in the legs, whereas SUVs strike adults in the pelvis or chest, and hit children in the head.

Despite these challenges, College Park has better possibilities for taming traffic than many other communities. Nearby arteries offer drivers many options that allow drivers to avoid the middle of town. They can travel east or west on the Beltway, East-West Highway or University Boulevard, and north or south on Adelphi Road, Kenilworth Avenue or the Baltimore-Washington Parkway.

College Park has an active bike sharing program, which can also reduce the need to drive, and a high percentage of young adults, who are most likely to bike. The new College Park Woods Connector Trail goes east and west, and the Rhode Island Avenue Trolly Trail offers a safe route north and south. Both provide easy connections to other regional bikeways, too.

Some of the city’s new infrastructure is heavily supported by local, state and federal funding. The Purple Line light rail will give the University of Maryland five stops on or near campus; these stations will also give residents better access to shopping and other regional transportation. Route 1 is being rebuilt from College Avenue to University Boulevard, and the resulting road will be safer for walking and biking.

The city gives developers tax breaks for new apartments because every privately owned building produces tax revenue for the city, whereas university dorms do not. Back in March, anticipating those new revenues may have been what prompted the city to approve $2.8 million for safety improvements to the intersection of Rhode Island and Edgewood Road.

Thousands of new apartments have been added near the university’s campus in recent years, with several thousand more planned. And, while more housing could lead to more traffic, it all depends on where that housing is located, according to Eric Olson, executive director of the College Park City-University Partnership. Locating housing closer to campus could help reduce traffic because fewer students would have to commute. “Figures from the State Highway Administration show that traffic on Route 1 has actually gone down. We’ve also started a program to help about 70 employees buy homes here,” he said.

As Olson also noted, “Calming traffic definitely requires smarter infrastructure. But the most important thing is giving people convenient ways to get here and live here without driving.”

Tags #may 2021 edition #Science of the city
Previous

Community comes together to clean up

The Literacy Lab, a nonprofit that tutors kids in reading, is coming to Hollywood Elementary