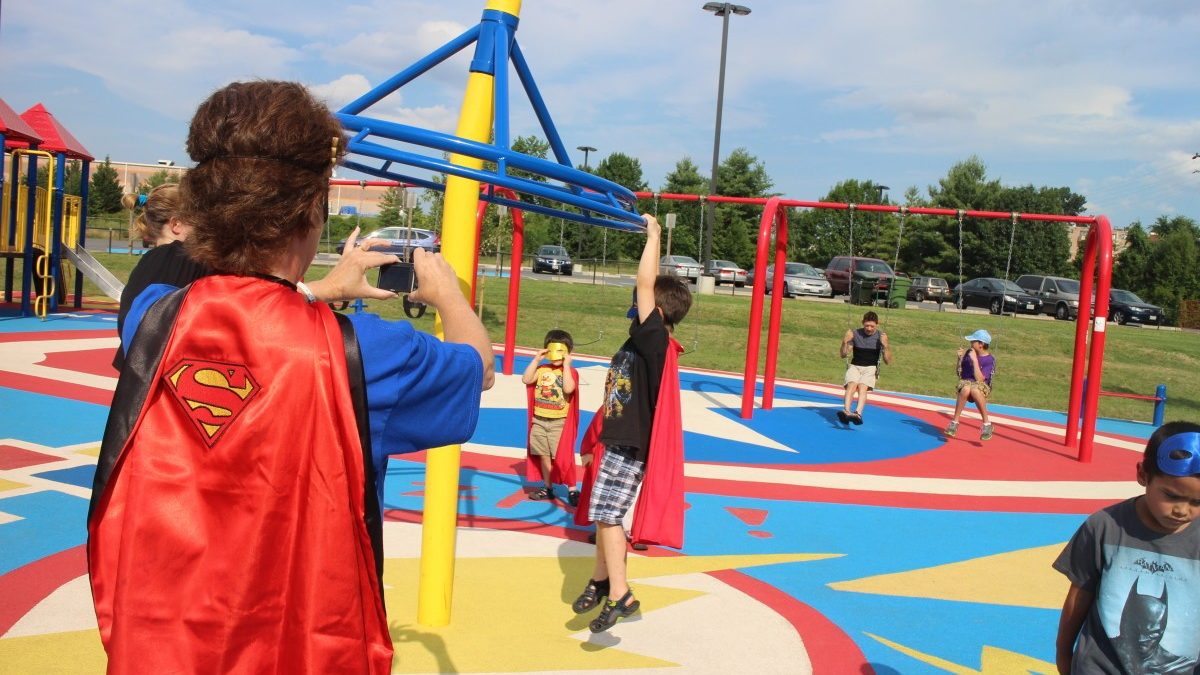 BY SUSIE CURRIE — Hyattsville’s newest place to play is disguised better than Clark Kent. But it isn’t likely to stay a secret for long.

The one-of-a-kind Comic Hero Playground, tucked into a little-used area of Heurich Park, opened to the public and caped crusaders alike on July 18.

Many in the crowd donned the brightly colored capes and eye masks distributed by Maryland-National Capital Park and Planning Commission (M-NCPPC) staff, who organized the event.

It’s the first Hyattsville playground to be renovated under M-NCPPC’s Imagination Playground program, which replaces outdated cookie-cutter amenities with themed play areas. So far, the county has completed about 20, with designs ranging from Native-American village to Viking ship.

Plans for a Justice-League motif began last summer, when M-NCPPC Landscape Architecture Supervisor Brenda Iraola came across a deeply discounted lot of blue, red and yellow equipment. It was too good a deal to pass up.

“Since it was on sale, I couldn’t pick the colors,” said Iraola. But when she heard that it was all made of steel – and remembered that a certain Superman movie was poised to hit theaters – an idea came to her in a Flash.

“I thought, Man of Steel: That’s it!” recalled Iraola. “After all, Superman and many other comic heroes [have costumes in] the exact colors of the playground equipment!”

Instead of looking up in the sky for inspiration, Iraola and her team started from the ground up. They designed the 5,000-square-foot rubberized surface themselves, adding black (for Batman) and white (Captain America) to the palette of primary colors. The result is a ground cover that is much more durable (and eye-catching) than the traditional wood chips.

“And it’s more fun,” added Iraola. “We really pushed the limits of what the rubber company could do.”

No plastic slides or wood chips or here – all the play structures are steel, installed over a colorful rubberized surface that carries the comic-hero theme from slide to swings. There’s the Superman logo on one end, the Batman symbol on another, and Captain America’s trademark red-white-and-blue emblem right in the middle, under the swingsets. (Look for the white star; you can’t miss it.)

The swingset is also used as a visual divider between what is essentially two playgrounds. Everything to the left of the bucket swings is intended for ages 2 to 5, while the swings with flexible seats signal a shift to the 5-to-12 play area.

A hopscotch game uses letters instead of numbers, with the squares spelling COMICS. Action words in a comic-style font are incorporated into the design as well: SPLAT! PLOP! ZOOM! The two bilingual entry signs have English on one side, Spanish on the other, and a ZAP! in the middle of both.

Other features include a silver Wonder Woman slide, a Batman climbing structure, and an overhead spinner adorned with lightning bolts, in an homage to The Flash.

Parents may want to brush up on their DC Comics characters before a visit, though. Overhearing the explanation for the the lightning-bolt design, one 9-year-old whispered: “Mom, who’s Flash?”

Comic Hero Playground, Heurich Park, 6001 Ager Road. From Ager Road, turn onto Nicholson Street by the dog park.  Make the first left and follow the path through a wooded area to the playground’s parking lot.

Hyattsville Life and Times, 6 years ago 2 min read
Nature Nearby