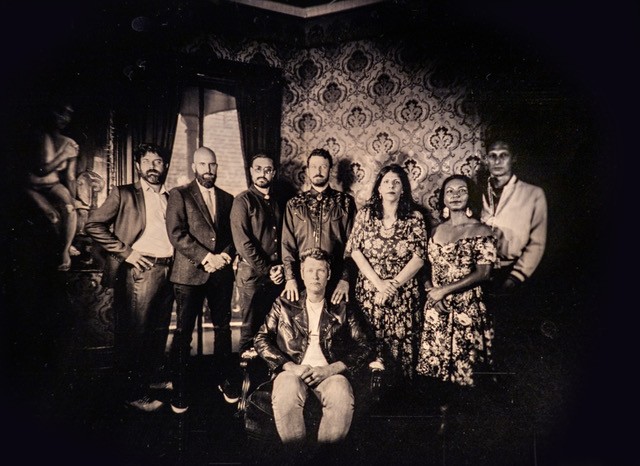 “The Haunted Boy” is a rock opera, taking place at Joe’s Movement Emporium in Mount Rainier from November 11-13 and November 18-20, which offers a new perspective on the famous Exorcist story.

Tom Liddle is the producer of the rock opera, “The Haunted Boy.” He graduated with a degree in music education from the Benjamin T. Rome School of Music at The Catholic University of America. Throughout his life, Liddle has been involved in the music realm. He currently is a member of the D.C. band Run Come See.

After viewing Anaïs Mitchell’s folk opera “Hadestown” back in 2011, Tom Liddle was immediately inspired. He said, “I was amazed by the show and this idea of a long form concept album: semi-stage but not a musical; a rock band, but still felt like you were seeing action from the characters.”

Liddle left the showing of “Hadestown” mulling over different ideas to make his own piece that was similar to the folk opera. That is when the concept of the 1973 movie “The Exorcist” materialized in his mind. Liddle felt that it would make a great story to base his rock opera on, as it is local to the D.C. community.

Although “The Haunted Boy” is not directly related to the Exorcist franchise created by William Peter Blatly, Liddle also used the story of the possession and exorcism of a Mt. Rainier child to create the rock opera. “When you say “the exorcist” to somebody, we automatically see the scenes of the girl floating above the bed. We are not doing that in any shape or form. We are taking this very strange story that happened locally and we are exploring the humanity around it,” said Liddle.

To assemble the cast of the rock opera, Liddle took advantage of his involvement in the D.C. music scene. He is friendly with many musicians who have their own bands. This helped him create the cast of “The Haunted Boy,” which has a diverse background of musical talent. Liddle appreciates this diverse background as it gives the songs a “unique feel”.

Margaret Wasaff, a cast member in “The Haunted Boy” and member of the “steering committee,” was approached by Liddle at an event one day. “Before he even launched into what it was, I was just like, ‘Yep, sign me up’,” said Wasaff. After learning about the rest of the cast, Wasaff “was even more glad” to be a part of “The Haunted Boy” as it allowed her to work directly with other musicians she had known for a long time.

To create the characters of “The Haunted Boy,” Liddle assembled a “steering committee” with Margaret Wasaff and Will McKindley-Ward. They each conducted an abundance of research on the D.C. area and the story of the original exorcism. From their research, the group created eight characters: the boy, the demon, the mother, the aunt, the priest, the psychologist, the reporter and the friend.

Each musician took upon the role of one character and was given a loose songwriting prompt from Liddle, along with a keyword. Liddle asked them to write a verse and a chorus rather than a full song.

Once each member created their own song, the cast came together and figured out a way to expand on the short songs they had created. From there, they determined how the songs would be performed in the final production.

Liddle expressed his appreciation for Joe’s Movement Emporium as well the Maryland-National Capital Park and Planning Commission, as they are sponsoring the event and helped get his idea up and moving.

Liddle cautioned that “The Haunted Boy” is not intended for children, as it does contain explicit material concerning mental illness, as well as swear words. However, he said, if families are comfortable speaking with their children about such topics, they are welcome.

Joseph Beck is a student journalist at the University of Maryland

Carjackings climb during COVID: But cars are recovered

City releases report on services for seniors and people with disabilities