The Blues live on in Riverdale Park 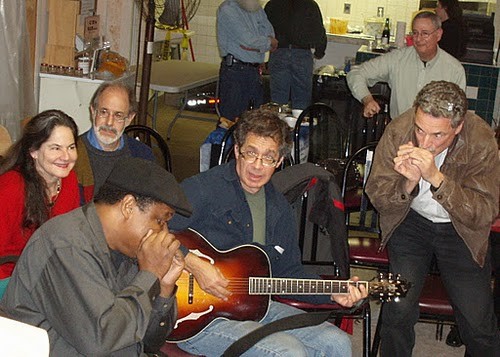 BY JIM GROVES — “Blues in E, regular 1-4-5,” someone yells. A guitar gives an opening riff, followed by a sweet harmonica.  Slowly, more sound rolls in: guitars, mandolin, saxophone, piano, harmonica and, finally, a voice tearing into a blues song that has been sung since the 1950s.

It’s just another Saturday afternoon at the Archie Edwards Blues Barbershop. Tucked between S&J Restaurant and the railroad tracks, near the intersection of Route 1 and East-West Highway, there is a plain building that looks a little in disrepair.  It was built as Riverdale Park’s original trolley station; most recently, until 2005, it housed the Riverdale Bookstore & Coffee Depot.

Now, though, on any given Saturday afternoon, you will hear instruments and voices emanating from the interior, belting out the blues and accompanied by the occasional rhythmic rumble of a passing train.

Don’t come for a trim, though; the Barbershop moniker is a tribute to the birthplace of these Saturday Jams. In 1959, Mr. Archie Edwards opened the Alpha Tonsorial Palace on Bunker Hill Road in Northeast Washington.  (That would be a barbershop, for those without a dictionary handy.)

Edwards (1918-1998) liked cutting hair, but he loved the blues – specifically Piedmont Blues, a finger-picking style that has the thumb hitting the guitar’s bass strings and the fingers playing the melody.

Every Saturday afternoon, Edwards would put down the scissors and pick up his guitar and open the door of his “Palace” to other musicians to jam the blues. There he would meet, and eventually play with, “Mississippi John” Hurt until Hurt’s death in 1966.

During his playing years, Edwards played with the American Folk Blues Festival, which toured Europe and even put out a couple of albums in the 1980s. In June 1998, Edwards died, but his legacy would live on.

The Archie Edwards Blues Heritage Foundation was created shortly after Edwards’ death to keep the blues alive.  The Saturday Jams continued for another 10 years in the original location, funded by donations, workshops and concerts.

In 2008, the barbershop was sold to a dentist, and many thought it would be the end of the Jams. But it turned out to be a piece of luck for our area. In March 2009, the Archie Edwards Blues Barbershop moved to its current home at 4701 Queensbury Road.

“This one is in A, like apple,” another voice yells out. Here’s how it works: musicians of all styles and playing ability get together to play the acoustic blues every Saturday from 1 to 5 p.m.  There are some great musicians who show up, like Phil Wiggins, Ian Walters, Miles Spicer and NEA award winner Warner Williams.

Then there are the others, who “keep their day jobs” (including yours truly) and just love to play.  Everyone who wants to gets a turn to lead and/or sing.  There is no stress, no pressure.  Everyone plays to their own ability.  Sometimes you just have to watch; other times you’re leading the pack.

The Barbershop also has an Acoustic Open Mic Night on the first Thursday of every month from 7 to 10 p.m. It’s all acoustic, but anything goes, not just blues.  Come to play or just to listen.  All are invited!

Jim Groves has lived in Hyattsville for 20 years and has been playing guitar for 25. He will be keeping his day job.