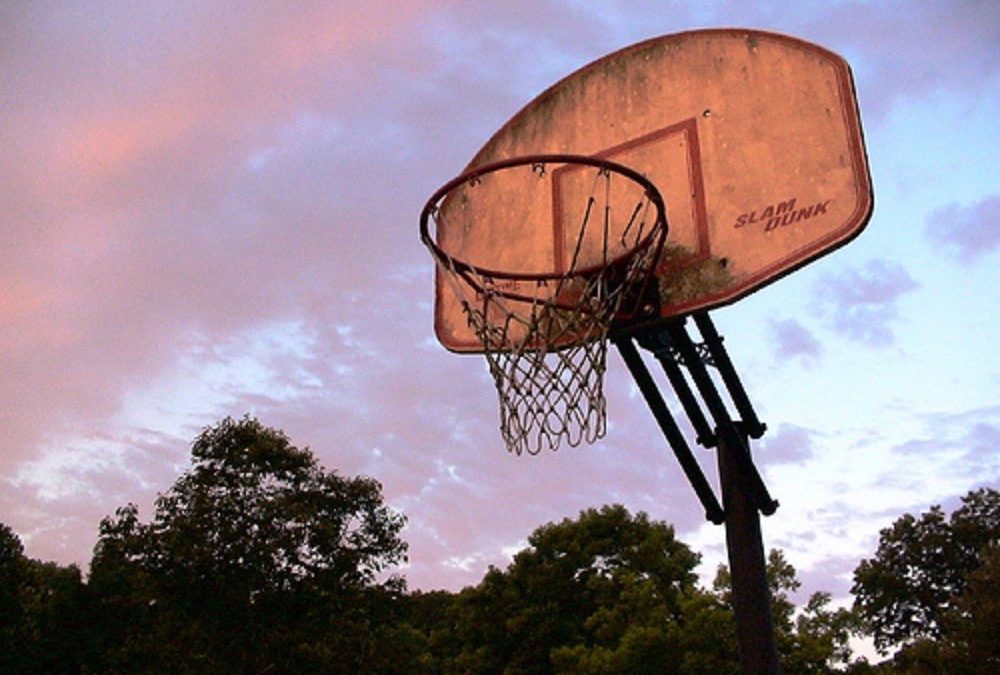 Players in previous years include Cameron Wake, now a Miami Dolphin; Quinn Cook, a rising star in Duke basketball; and Victor Oladipo, now in his first season with the Orlando Magic. <a href="http://commons.wikimedia.org/wiki/File:Basketball_Goal.jpg#mediaviewer/File:Basketball_Goal.jpg">Photo courtesy Prettybea.</a> via <a href="//commons.wikimedia.org/wiki/">Wikimedia Commons</a>.
Education

BY CHRIS MCMANES — If you’ve been coming to the Turkey Shootout in Hyattsville since it started in the mid-1990s, you’ve seen some players who have developed into premier athletes. Another crop of rising stars is set to compete when the action gets underway the day after Thanksgiving (Nov. 29), concluding on Sunday, Dec. 1.

“Dick Brown spent his entire life coaching at St. Jerome and DeMatha,” said Sego, who succeeded Brown as St. Jerome boys varsity basketball coach seven years ago. “So what better way to honor him than with a huge tournament in Hyattsville?”

Usually, both schools host the event. But because St. Jerome Academy’s gym floor sustained severe water damage in September, all the games are at DeMatha this year. The Stags began co-hosting in 2007.

Brown coached at St. Jerome from 1966 to 2006, guiding the Jaguars to two CYO city championships. He was also a DeMatha football assistant coach for 36 seasons, and was the Stags’ head junior varsity coach at the time of his death.  Tom Ponton, director of DeMatha’s Development Office, played on Brown’s first title-winning team.

“For somebody who has had a very strong impact on a lot of young men and is already remembered in many ways,” Jones said, “this is just another way to honor him and his legacy.”

Sego is expecting more than 40 JV (12 and under) and varsity (14 and under) teams to participate. Each is guaranteed to play at least two games. Parishes pay a $240 entry fee per team; after scorekeepers and referees are paid, DeMatha and St. Jerome share the proceeds. St. Jerome’s portion helps to fund other parish sports, such as soccer, track and baseball. Under Armour donated the tournament T-shirts.

The Turkey Shootout began at St. Mark the Evangelist School in Hyattsville in 1996 and brings about 1,000 people into the city. Unlike many CYO tournaments, admission is free.

“It’s Thanksgiving time,” Sego said. “This is the tournament where you bring grandma, grandpa, aunts, uncles, friends, neighbors. This is the one you can invite everybody and not have to worry about [paying to get in]. I have to warn my parents that some tournaments charge $6 or $7 at the door.

“We charge a team fee and that’s it. We’re not going to nickel-and-dime you. And that way we get a good crowd here.”

Past Turkey Shootouts have showcased players such as Roy Hibbert, starting center for the Indiana Pacers; and DeMatha grad Cameron Wake, an All-Pro defensive end for the Miami Dolphins.

St. Jerome alumni include Victor Oladipo, selected second overall by the Orlando Magic in the 2013 NBA Draft; Douglas Dutch, who played football at Michigan and was on the Washington Redskins practice squad; Marcus Derrickson, a Paul VI High School junior who has orally committed to Georgetown; and Quinn Cook, Duke’s starting point guard. Cook and Oladipo later starred at DeMatha.

“He pretty much has a different team every year,” said Jones, “and for him to consistently have them in the discussion to be the best team in the city, that’s impressive and shouldn’t be overlooked.”

Sego begins working on the event in earnest in early October. He was asked how he handles his administrative and coaching duties on game days.

“I never schedule my team to play the first game on any given day,” he said. “I run around crazy that first hour worrying about if my scorekeepers and referees are going to show up. Once they do, I can take a deep breath and say, ‘OK, we’re good to go.’”

Planning board takes no action on Chick-fil-A