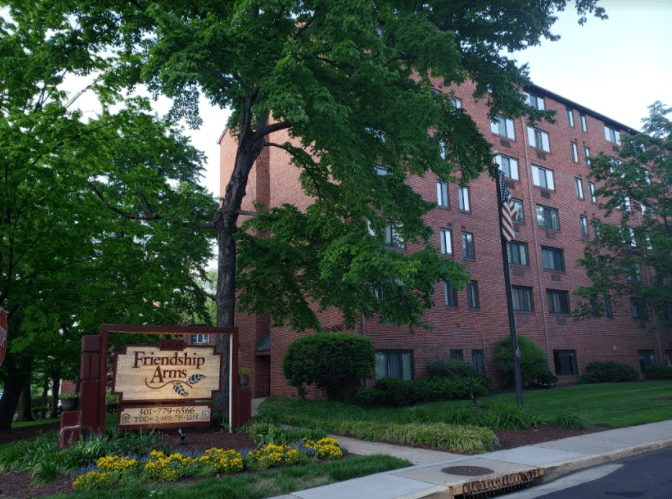 Tenants at Friendship Arms, an apartment building in Hyattsville for seniors and the disabled, had to move out following an October 1 electrical fire.

On the 7th floor, the top floor of the building, 25 apartments still stand empty, along with one apartment on the 6th floor.

As of May 13, only seven of the 26 tenants who had to leave their homes have been able to go back. The seven who have returned were offered vacant apartments on lower floors as space became available.

In the meantime, three tenants have moved away. Two have died. Fourteen tenants are still waiting to go back to Friendship Arms, the majority in hotels, and a few with family.

Several residents expressed concern that a tenant who died in the week after the fire had needed transportation for regular dialysis.

Watson spoke of the death of a second displaced resident, who she said was found alone in her hotel room April 19. Watson said that many seniors in the building do not have family close by to help.

In an interview, one elderly tenant who asked to remain anonymous for fear of retaliation from building management said she appreciated the stipend she received for groceries as well as meal deliveries that she has received at her hotel. She said however that mail, laundry, and getting to the store are all more difficult, and that she misses her apartment. She also said she was confused as to why she has recently begun receiving electric bills.

Another tenant housed in a hotel said that after multiple rounds of phone calls to city and state officials, and an increase in her rent, from $1,400 to $1,650, she is now seeking a voucher to move somewhere else, despite having been a tenant in the building for more than a decade.

SHP Management Corp manages Friendship Arms among a portfolio of about 50 buildings in the Northeast and Mid-Atlantic.

In an interview on May 13, Bill Brown, the senior vice president of operations at SHP, said the company has petitioned the county twice to allow tenants to return to their homes. According to Brown, the company had been advised by engineers working on the project that all but three units have been safe for occupancy since the beginning of February.

According to Brown, the county has also added a new requirement that the management company replace the trussing system on the roof before making mechanical repairs as well as interior repairs to the three damaged units.

That roof work is halted now, according to Brown, awaiting a permit from the county. County Council Member Deni Taveras’ office did not reply to a request for comment.

Cindy Zork, communications manager for Hyattsville, says the city has been in conversation with building management.

School district will phase out some security personnel