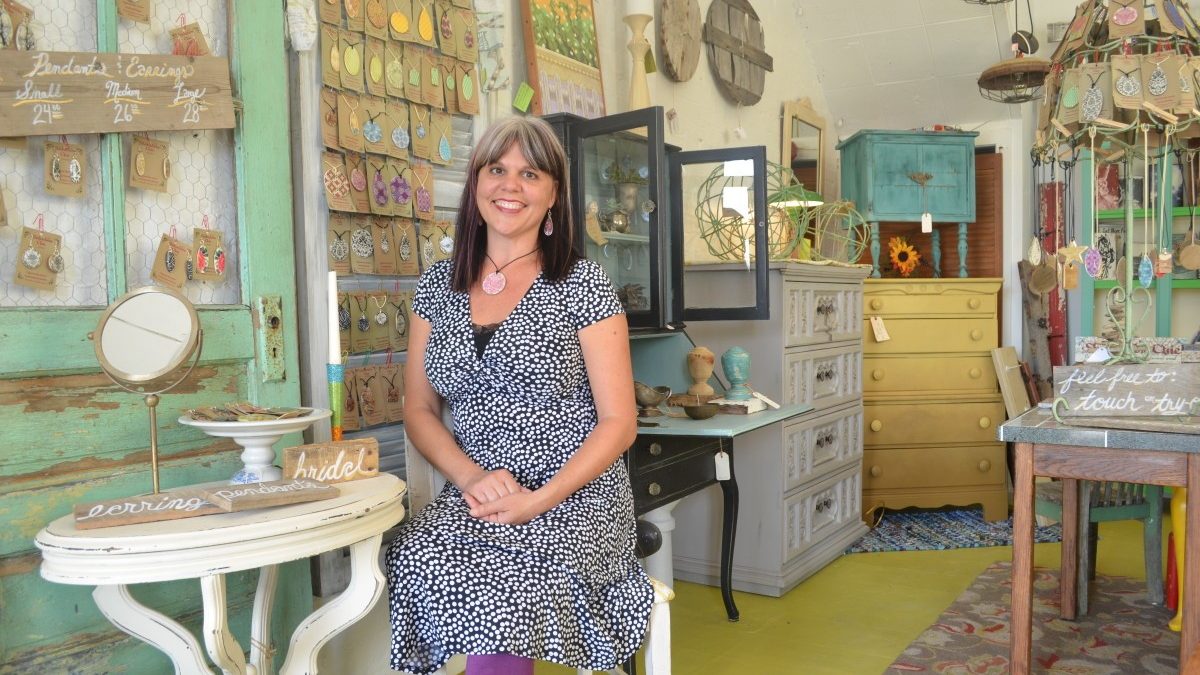 Sue Older-Mondeel in her studio.
Art

Tucked away inside the Community Forklift is a new business focused on turning trash into treasure. Tanglewood Works, a project of the Edmonston-based salvaged and surplus building goods “thrift store,” offers repurposed and upcycled goods created by Sue Older-Mondeel.

“It made itself a business,” Older-Mondeel said. When she moved back to the East Coast from the San Francisco Bay Area, she was on a tight budget but needed furniture. “The kids were watching television on lawn chairs,” she said.
She began fixing things up that would fit her home, only to have others express interest in her projects. She started selling furniture from her house and then moved to fairs, festivals and even a booth in Community Forklift.

Today, her store is filled with painted tables, chairs and necklaces. She looks forward to the holiday season where the store will sell scarves, Christmas decor and other “green” upcycled gifts such as jewelry made from silverware.
“I haven’t made anything that hasn’t sold, so that feels really good,” Older-Mondeel said. “If I don’t sell it today it doesn’t matter, I will sell it tomorrow and if I don’t sell it tomorrow, I’ll sell it next week.”

Tanglewood Works is not Older-Mondeel’s first business. She calls herself a “serial entrepreneur”. From video editor to restaurant owner, she learned what worked along the way. Tanglewood Works is her “favorite right now,” she said.

Older-Mondeel said the new business is not as new as it might seem. Though Tanglewood Works opened its doors on August 21, her fifteenth wedding anniversary, crafting is something she has enjoyed since she was a child. Even her previously-owned restaurant was filled with repurposed items.

As the process of creating “treasure” begins, Older-Mondeel said she searches for pieces made of natural material. At the beginning, each new piece is like her child, she said, and she never wants to let it go.She says she usually does not sell the pieces she cannot recreate.

Aderyn Bright, the events coordinator at Community Forklift, explained that Older-Mondeel is able to create products people wish they could make themselves.

“Sue came in with really the heart of what upcycled material is,” said Bright.

In addition to her own work, Older-Mondeel displays the work of local artists.

“I am thrilled when I sell a piece for an artist who did not think they could make money doing what they are doing,” she said. She said she wants people to know that the pieces they buy from Tanglewood Works were saved, by the artist, from the trash.

The Community Forklift “always wants to display what you do with these items,” said Bright. Now there is a store that displays “the best and most beautiful creative uses” of the store’s raw material offerings. Not every day is perfect, said Older-Mondeel. She has up days and down days like every other business owner, but “You just have to have faith.”
After being open just over a month, Older-Mondeel’s biggest request is for classes.

She plans to offer some soon. “If I’m not selling the product, I’ll sell the process,” she said. The classes will be taught by her and her other local artists and show people how to create works like the ones in the store.