Taking off the gloves at Magruder Park 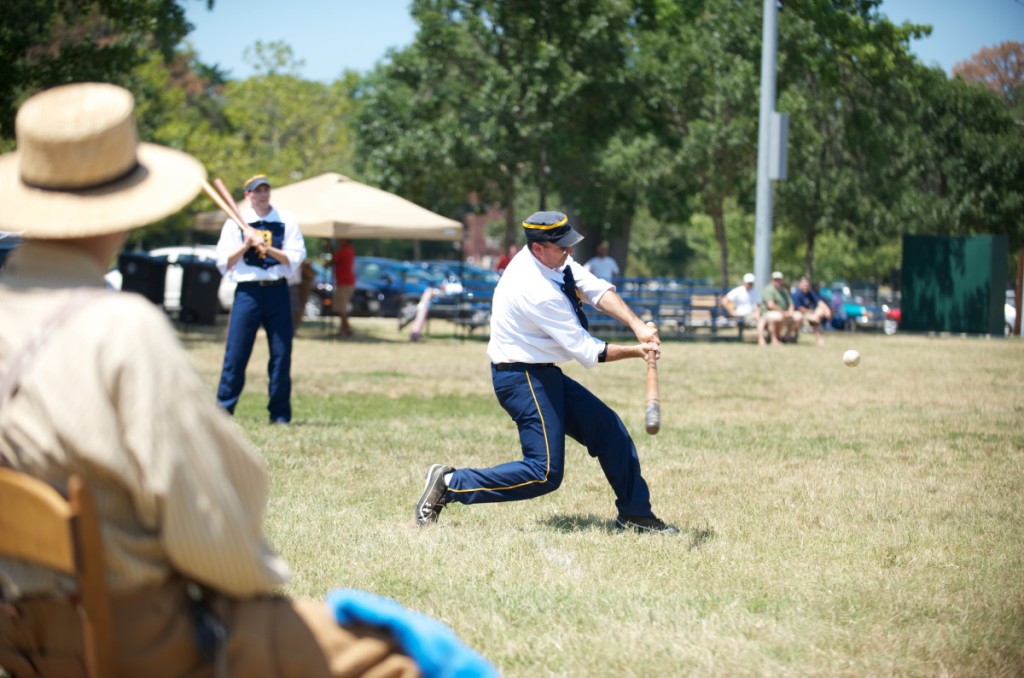 BY CHRIS MCMANES — T-Ball and youth baseball are regular staples at Magruder Park. But on July 31, the park hosted a contest that likely hasn’t been played in Hyattsville in more than a century.
The Potomac Nine of Washington, D.C., battled the Cecil Base Ball Club of Chesapeake City, Md., in a doubleheader of vintage “base ball.” About 75 people ventured out on the toasty Sunday to see the game the way it was played in 1864, complete with hot dogs, peanuts and Cracker Jack for the fans. (OK, go ahead and finish singing “Take Me Out to the Ball Game.”)


The competition was sponsored by the City of Hyattsville, the Maryland-National Capital Park and Planning Commission and the Anacostia Trails Heritage Association as part of Hyattsville’s 125th anniversary celebration. It was played on what was once known as Wine’s Fields.
Potomac’s Howard “Ivy” Berkof – all players have nicknames – became interested in the sport after reading about an upcoming game in 2007.
“I went and checked it out and immediately got hooked,” Berkof said. “I said that’s something I want to do.”
Players of that era were called “ballists.” Pitchers were “hurlers” and hitters were “strikers. ” The hurlers throw underhanded at an expanded strike zone. A ball that initially lands fair but goes foul is considered fair. A ball caught “on the bound,” or bounce, is an out. The bases are 90 feet apart, as they are now, and the barrels of the wood bats are a little thinner than today’s.
Probably the most noticeable difference is that the ballists play barehanded; gloves didn’t catch on until the mid-1880s. The ball is a little softer and a little bigger than a modern baseball.
“It hurts when hit hard and struck at you, and it can have spin and move on you, so it’s not as easy,” Berkof said. “But yet you won’t find too many people getting finger injuries or hand injuries.”
Fielders have to field anything from soft fly balls to screeching line drives. Hard throws are often directed to the first baseman.
“It’s tough to be a first baseman, especially if you get balls in the ground,” Berkof said. “On a ground such as this, where the bounces can go everywhere, it’s tough. But it’s part of the game, and that’s why we play it out.”
The Potomac Nine are part of the Chesapeake and Potomac Base Ball Club, which includes the Chesapeake Nine of Baltimore. Berkof, the club general manager, said a third team, the Northern Virginia-based Old Dominions, will begin play next season and. The teams play in the Mid Atlantic Vintage Base Ball League, which stretches from Southern Maryland to New York. Their uniforms, language and mannerisms are expected to be from the 1860s.
“It’s kind of like a throwback to when baseball first started, what it was all about way back,” Potomac ballist Gene “Pop” Meacham said. “I really enjoy history, and this is the history of baseball, what it was like in the 1860s. So it’s a lot of fun.”
Berkof handed out club flyers between games and answered onlookers’ questions.
“It’s fun to share a little piece of history and be authentic about how we play and how we talk,” he said. “It’s a lot of fun and we’re honoring history, too. Baseball is such a great sport and one that is timeless.”
If you’d like to see a game, the club will be playing at Huntington South Park in Bowie on September 25 at 2 p.m. If you are interested in joining, contact Berkof at hberkof@yahoo.com.
Chris McManes is a long-time T-Ball coach in Hyattsville.

Legend and Lore: He put the Hyatt in Hyattsville

Nature Nearby: What lies beneath