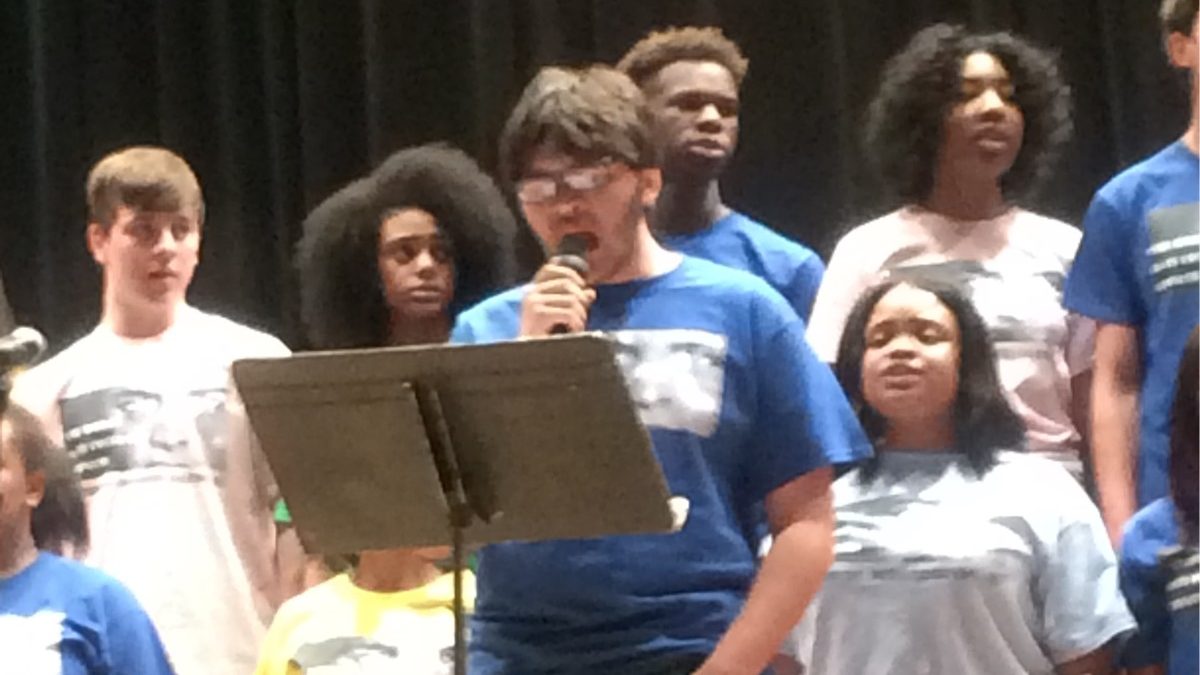 BY ROSANNA LANDIS WEAVER — On Wednesday April 15, the Jim Henson Visual and Performing Arts Academy at Northwestern High School presented a program entitled “The World as it Could Be.”  The performance, which will be repeated on Thursday, April 16, incorporated every facet of the theatre, art, dance, choir, band and orchestra.

Many of the pieces joyfully integrated two of the arts programs. In one, two vividly costumed dancers emerged from from the painting that camouflaged them into a spirited and graceful dance aptly called “Freedom.”  Another dancer in a willowy white gown performed with great artistry as a student sang a solo of “Redemption Song.”  The orchestra, band and choir combined to perform  “Vivir Mi Vida,”  in an arrangement by school orchestra conductor Leonardo Lucini. Members of the theatre department performed a powerful piece written by student Jewel Schrader Orem entitled “The Hands” in front of a sculpture of hands created by students in the arts program.

THURSDAY, APRIL 16 AT 7 P.M.: “The World as it Could Be” performed by Northwestern High School Visual and Performing Arts Academy students

Indeed, many of the themes of the evening were powerful, with cries of “gender equality is a human right” and “black lives matter.”  “The World as it Could Be,” according to the website, is part of an initiative to “use the creative arts to deepen learning about the Universal Declaration of Human Rights (UDHR)” which gives students “the voice to teach their peers and adults about the importance of the UDHR concepts.” The thirty principles of the declaration were included in the printed program, and were a topic of  is short multimedia productions created by the TV production team.

The program included short readings from Marcus Garvey, Martin Luther King Jr, and Nelson Mandela, as well as original works. As the choir sang “Hold Fast to Dreams” different students stepped up to a microphone to share personal dreams of going to law school to bring justice, or   an end to police brutality.

The evening ended with every student on stage singing Bob Marley’s “One Love,” and the audience joined in singing, “Let’s get together and feel alright.”