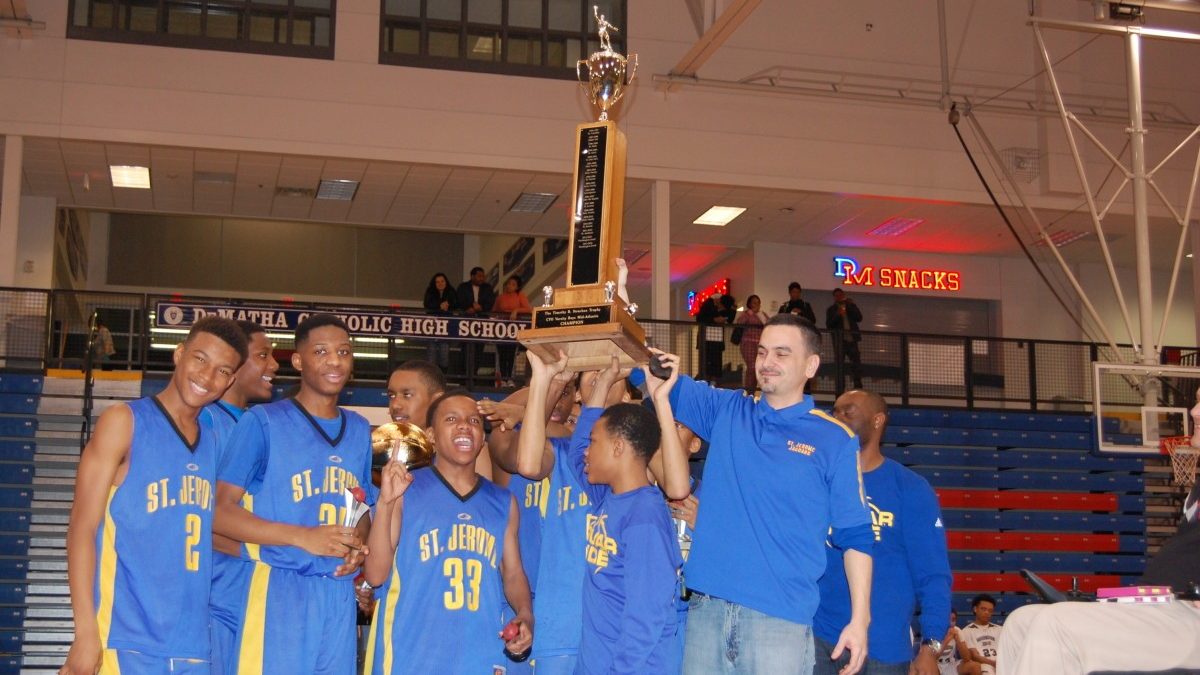 BY CHRIS MCMANES — The DeMatha Catholic High School scoreboard listed Washington Jesuit Academy (WJA) as the home team. But it was St. Jerome that felt most at home in the 14-and-under city championship on March 11.

Playing about a quarter mile from St. Jerome, the Jaguars ran away from the Panthers, 53-40, to win the Washington, D.C., Catholic Youth Organization Boys 14U Mid-Atlantic City Championship. The Jags, playing their most complete game of the season, vanquished a rival that had beaten them twice during the regular season.

“Everything came together at the absolute right time,” St. Jerome Coach Joe Sego said. “We knew we had this kind of offensive output in us, but we hadn’t put it together for an entire game.”


St. Jerome (33-9) went for the jugular in the second quarter and turned a one-point lead into a 17-point bulge. Its harassing defense, superior rebounding and crisp passing game continually allowed it to find open seams on the perimeter of the WJA defense.

Malcolm Dread, the Jaguars’ only seventh grader, triggered the 20-4 avalanche when he buried a 3-pointer from the left wing. Tiger Simms followed with a fastbreak layup, and Thai’re Vance notched a three-point play. Nicolas Cross, who corralled a team-high seven rebounds, created a steal, drove to the basket and was fouled. He made the first free throw and missed the second, but St. Jerome got the rebound.

The Jags made the Panthers pay for not securing the board when Dread hit a jumper from the left corner. With 3:31 to go before halftime, Devon Dunn nailed a 3-pointer from nearly the same spot to give St. Jerome a 24-11 lead. After a WJA basket inside, Simms deposited a trey from the top of the key.

When Dread took a pass from future DeMatha Stag Alex Edgecombe and nailed another 3-ball – from the right side – the Jaguars had a 30-13 advantage with 1:40 left before intermission.

“We were just knocking down shots and playing good defense,” said Cross, who will also enroll at DeMatha. “We were having fun out there, not really thinking too much, just making plays and doing what we needed to do.”

The Panthers, who defeated St. Jerome in the 2013 city championship game and won the title last year, scored the final four points of the quarter and went into the break down 30-17. Outhustled all over the court, they were outscored 24-9 during the second period.

Sego (pronounced say-go), whose club trailed 8-6 after the opening eight minutes, employed a “2-3 jam” defense in the first half with the two up men attacking the Panther point guard full court. He switched to man-to-man after intermission to make it harder for WJA to launch 3-pointers and climb back in the game.

St. Jerome extended the lead by scoring the first five points of the third quarter, including Dread’s third triple.

“Our game plan was simple: We would take their point guard out of the game and let somebody else bring the ball up,” Sego said. “That caused their offense to really be kind of disorganized. And I told [my team], on the offensive end, let it fly.

“I never expected what happened in the second quarter, though.”

Dread, who scored a game-high 19 points and had four rebounds, said he felt confident shooting and was surprised at how easily the Jags defeated the top seed in the playoffs.

“I thought it was going to be a close game,” he said. “That’s why coach had us doing free throws yesterday at practice.”

The Jaguars played so well defensively that they never allowed the Panthers to get into a smooth offensive rhythm and go on a scoring spree. Nigel Black, who produced 14 points, six boards and two steals, took the first of three St. Jerome charges in the fourth quarter (Simms and Dread had the others). Black’s layup in transition and two Dunn free throws boosted the Jaguar lead to 21 points, 50-29, with 5:33 to go.

“They played a lot harder,” said Blue, who got a team-high 14 points from Mekhi Long. “They got to almost every 50-50 ball, and those are the type of things that win games.”

Simms finished with nine points, four rebounds and a pair of steals. Six of his points came beyond the arc.

“We worked really hard, and a lot of our hard work paid off,” Cross said. “We just stuck together as a team, and it all paid off in the end.”

Sego, who just completed his ninth year as St. Jerome head coach, accepted his third city championship trophy from fellow 1994 DeMatha graduate Tim Strachan, after whom the trophy is named. Sego, honored as CYO Coach of the Year in 2010, also led the Jags to the title in 2008 and 2011.

His predecessor, the late Dick Brown, guided the Hyattsville parish to the crown in 1974 and 1985. The five Mid-Atlantic varsity boys city championships St. Jerome has captured are tied for the most in Archdiocese of Washington history.

The triumph punctuated a season in which the Jaguars often played nothing like the team that hoisted the trophy. Whether it was poor defense, outside shooting or free throw shooting, or just not following Sego and assistant coach Scott Smith’s directions, the Jags frequently underperformed.

“You can’t get a team ready for this unless they go through that,” Sego said. “You’ve got to have some difficulties. That’s how you win.”

Visiting the Waterhole in Mount Rainier

Pepco to provide 1500 free trees to Maryland and D.C. customers