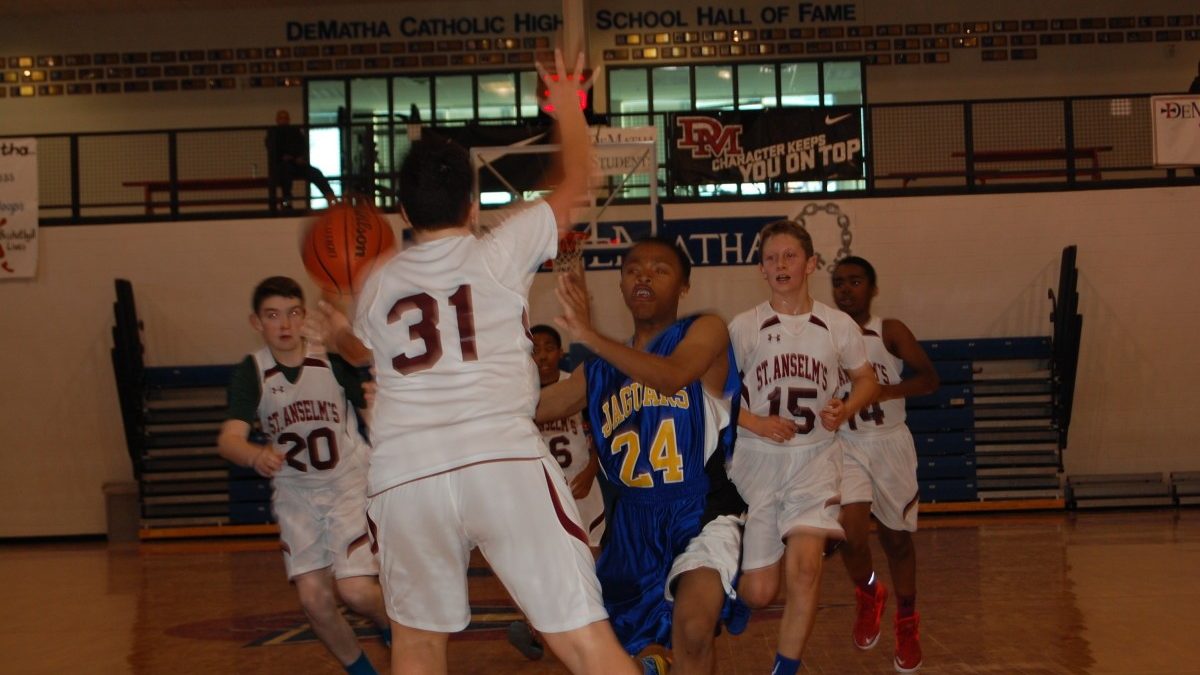 Playing in the Coach Dick Brown Memorial Turkey Shootout in Hyattsville, Thomas’ 14-and-under squad won the first Varsity B title in the event’s 19-year history with a 49-21 victory over St. Anselm’s Abbey School of Washington. The Jaguars three tournament wins came at DeMatha Catholic High School, whose basketball bloodlines are second to none.

“Pretty much just the mystique of DeMatha High alone says it all,” Thomas said. “We were real excited to play on a high-school-level floor. Even a few of the DeMatha varsity players who were students at St. Jerome were here at the game.

“Just the whole atmosphere of the arena alone – and being the main event – is a real special feeling.”

St. Jerome won its first game at DeMatha’s Morgan Wootten Gymnasium, the one where Wootten made his mark during a 46-year coaching career (1956-2002) that saw him win five national championships and coach such players as NBA veterans Adrian Dantley, Keith Bogans and Danny Ferry. Wootten, 83, is one of only three high-school coaches in the Naismith Memorial Basketball Hall of Fame.

“That’s by far a classic location,” Thomas said. “Some of the best kids in the area have played in that gym. My guys had an opportunity – whether they realize it or not – to play on a historic basketball floor.”

Thomas and his wife Joy’s twin sons, Tyler and Tylen, played a key role in the Jags’ game-one  victory over St. Andrew The Apostle of Silver Spring. Tyler scored 24 points and Tylen 11. Their second win came over Our Lady of Mercy of Potomac.

The Jaguars captured the crown at the modern LT (Seal) Brendan Looney ’99 Convocation Center, named in honor of the DeMatha grad who in 2010 lost his life in Afghanistan. The arena’s playing area is the Morgan and Kathy Wootten Gymnasium.


The Jags raced to 12-1 lead Sunday and stretched it to 22-1 by halftime. Leander Jackson led St. Jerome with a double-double (13 points, 10 rebounds). Robert Allsbrooks was 2-for-2 from 3-point range and finished with eight points. Jayden Fenton contributed three assists for the Jaguars, whose defense led to 19 points off of turnovers.

“I thought we played exceptionally well,” Thomas said. “There were a lot of good teams in the tournament – some great competition.”

The Coach Dick Brown Memorial Turkey Shootout is sponsored annually by St. Jerome Parish. DeMatha and St. Jerome Academy have been co-hosts since 2007.

The event name pays tribute to Dick Brown, who coached football, baseball and basketball while also teaching at St. Jerome for 40 years (1966-2006). He coached football at DeMatha from 1970 to 2005 and was the Stags’ head JV football coach when he succumbed to cancer on July 6, 2006.

The Jaguars’ title adds to the rich legacy of basketball achievement at St. Jerome, the only Catholic primary school in the Archdiocese of Washington to offer a classical curriculum. Victor Oladipo (Orlando Magic), Dutch Morley (former Maryland standout) and Quinn Cook, Duke’s starting point guard, are all St. Jerome graduates.

Scott Salkeld, director-sales operations for Under Armour, the Baltimore-based athletic performance sports, footwear and equipment company, played for Brown in 1987.

“This is the first year that we’ve included a B-level bracket,” Tournament Director Joe Sego said. “Having a St. Jerome team win it means a lot.”

Eight teams competed in the B division. One coach who saw the Jags warming up asked if that was the parish’s A team.

“St. Jerome has a great tradition in basketball,” Thomas said. “It was great to be a first-time winner.”

University of Maryland men’s basketball coach Mark Turgeon and his family stopped by St. Jerome Academy on Saturday night to see Ella Turgeon play for Holy Redeemer of Kensington. Following the game, the coach was gracious enough to pose for a picture with St. Jerome student Alex Edgecombe. The eighth-grader plays for Joe Sego’s Mid-Atlantic Varsity team, which went 2-1 in the tournament and has not lost at home in 10 years.

Maryland is off to a 7-0 start and is ranked 21st in the nation by the Associated Press, its first appearance in the AP Top 25 since Turgeon’s arrival in College Park in 2011. The Terrapins host No. 7 Virginia at XFINITY Center on Wednesday night at 9:15.

High Praise: Little Flower Girls Varsity Coach Malcolm Hollensteiner praised the St. Jerome Gymnasium and its new playing surface: “You guys have the best CYO gym, and the new floor is great.” His daughters, Mary and Katherine, play for the Cardinals.