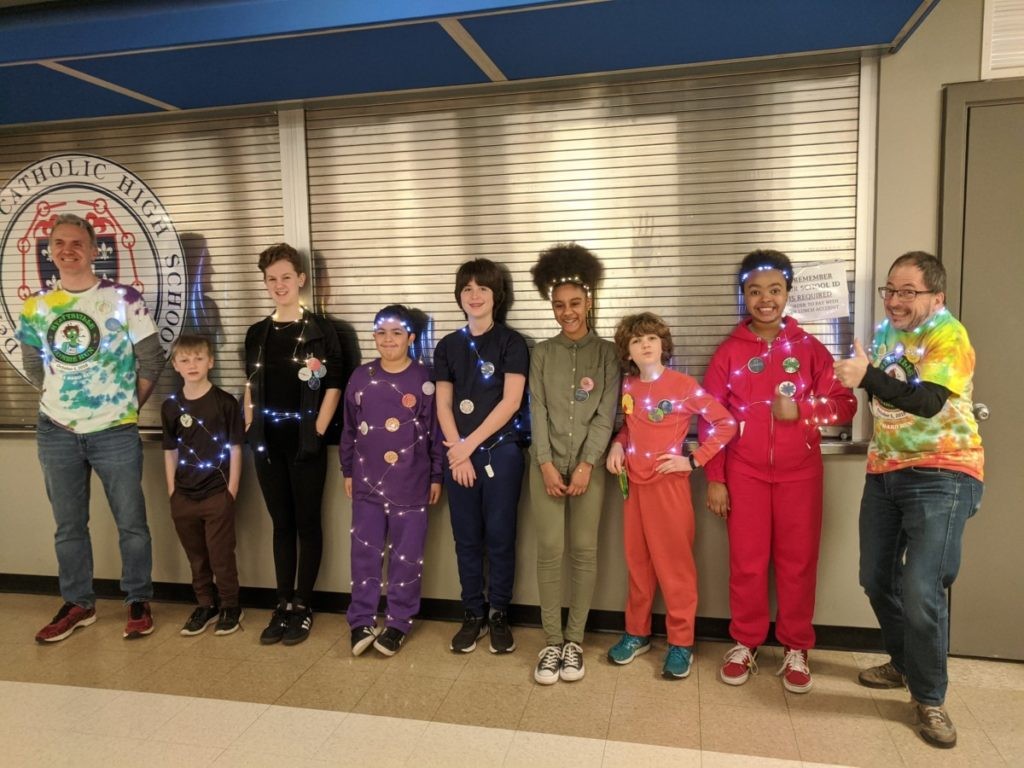 By HEATHER WRIGHT — On Feb. 2, students across the state, including at least two teams from Hyattsville, competed in the First Lego League (FLL) qualifying tournament, held at DeMatha Catholic High School. In the most well-known portion of the tournament, autonomous robots — designed, built and coded by individual teams — had 2½ minutes to perform as many “missions” as possible on a large Lego-filled game table. A mission could involve, for example, the robot raising a flag or releasing a swing.

The Robot Game is only one element of the FLL competition, however. The other two (perhaps lesser-known) parts are the Innovation Project and Core Values. For this year’s Innovation Project, teams were to identify a problem with a building or public space in their community and then design, share and refine a solution. On Jan. 4, a neighborhood FLL team, Hy-Lights, presented a proposal for a multi-use micro-community center to three City of Hyattsville councilmembers.

At FLL tournaments, each team gives a 5-minute presentation during which they discuss the problem they identified, their solution and how they shared it. According to the scoring rubric, a team can score higher on sharing if they present their challenge solution to “multiple professionals” or “more than one audience who may benefit.”

According to Hy-Lights parent coach Matt Higgins, Hy-Lights’ members identified an underutilized space in Hyattsville and envisioned it as a learning center and meet-up space for all ages. Tom Behrens, the other parent coach, said the team’s proposal involved adapting the building in ways that would also make it more environmentally friendly and increase accessibility.

Councilmember Ben Simasek attended the Jan. 4 presentation and was impressed with the team’s solution and their presentation. Simasek said, “I think [the community center] is a great idea! I loved their thoughtful and inclusive approach. I especially liked their emphasis on sustainability.” Simasek pointed out how some of the team’s vision overlapped with what the city is creating at the Teen Center (including its in-the-works second site), while noting that Hy-Lights designed their center to serve a wider age range.

Simasek commended Hy-Lights’ Jan. 4 presentation. “They demonstrated a collaborative and creative approach to solving community problems. The presentation was also engaging; they opened with a funny skit, then each of them took turns presenting different aspects of their innovation. I was very impressed and thankful for the opportunity to hear their ideas and learn about their awesome project,” he said.

According to Higgins and Behrens, Hy-Lights members and parent coaches met for three hours each week — two hours on a weekend night and one hour during the weekend — to prepare.

Both Higgins and Behrens noted, in a Feb. 1 interview, that each team member contributed to all FLL components, including the research project. Higgins said, “The big difference I’ve seen in terms of this year and previous years is really the quality of the research project, the time they’ve spent on it, the depth of the research that they’ve done, and that all of them have done.”

After a discussion of teamwork and the importance of each member’s contribution, Higgins added, “That’s why I think this year’s research project has been such a wonderful thing. I feel that there’s no one who has been the slacker in the group. They’ve all taken the ball and run with it, and they’ve done a fantastic job.”

Both parent coaches saw numerous benefits in having students participate in the FLL program, beyond an early introduction to coding and understanding how programmable devices work. “It’s not magic that’s making this happen,” quipped Behrens.

Behrens underscored that the FLL program helps students develop valuable social skills. “I think actually that’s the biggest part of it, whether the kids know it or not. This is building social skills that they’ll have to use in high school and college when they’re on teams doing projects.”

Higgins agreed and noted that being part of  an FLL team was a good way for students to learn how to work both on their own and as a team. “I think it’s good for teaching them compromise — that although your idea might be very good, it might not win approval with the group, so working in terms of how do you build coalitions in the group or explaining why your idea should be used.”

One of the team highlights for Higgins was “when things came together” during the presentation to councilmembers. “We see how they interact with us and with parents, but they were in front of other adults, and they did a great job,” he explained.

Behrens agreed. “That was beautiful,” he said. “There was like a switch. It was like ‘We’re doing this now.’”

Overall, Behrens said, “I’m hoping they are getting the building blocks in place to make them better people, better citizens, better friends and better competitors — because there’s a good way of competing and a bad way of competing.”

After the tournament, Behrens was excited and proud that the team placed second in the Robot Design category and noted, “Matt, myself and the parents were so pleased with how poised and upbeat the team was all day!”

The FLL Maryland State Championship will take place on Feb. 23 at the University of Maryland, Baltimore County.