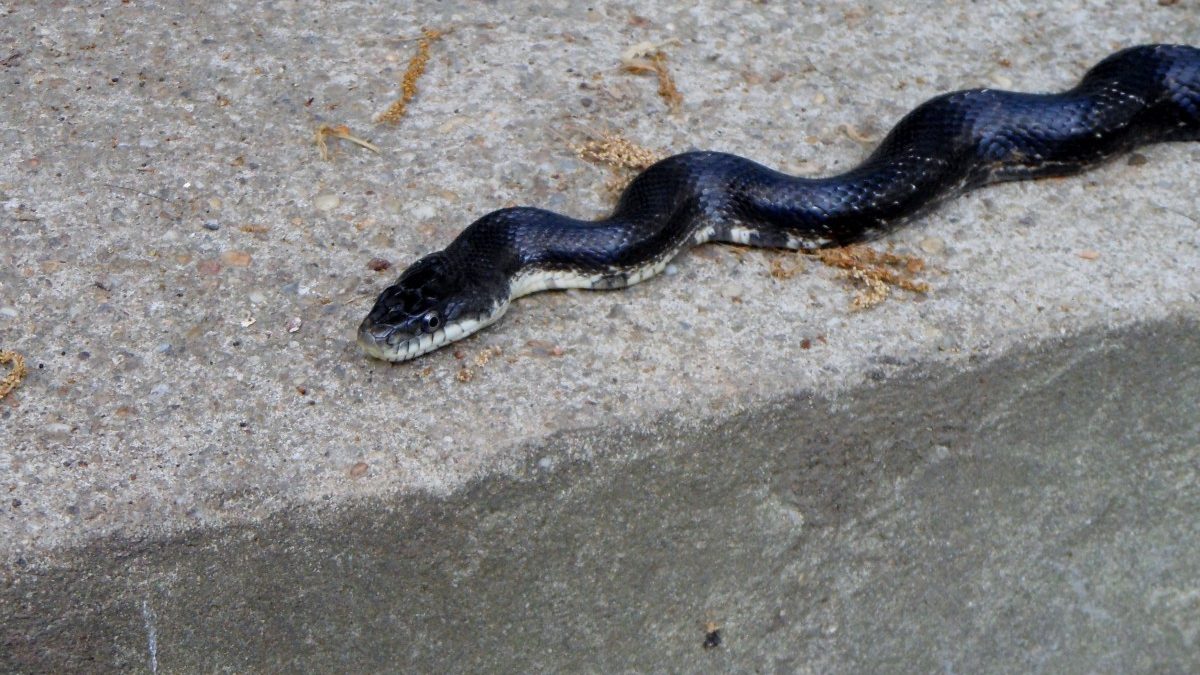 This Eastern black snake, which appeared on the author’s porch steps, spooked the mailman but does not pose a threat to humans. Photo courtesy Fred Seitz.
Nature Nearby

BY FRED SEITZ — One fine May afternoon, I saw the mailman on my front sidewalk waving his hands at me somewhat frantically.  I thought maybe my dogs, who were doing their “drive the mailman away” routine, might have spooked him more than usual. I opened the front door as the mailman said, “I don’t think he’ll bother me, but he looks kind of creepy.”

“He” turned out to be a 4-foot snake stretched out on the top step. I looked at the snake, who seemed much calmer than the mailman, then stepped over him once to retrieve my mail and again to take it inside — and grab a camera.

The snake remained calm, tasting the air with his tongue, and I stepped over him to get a closer view from the lower steps.  When I leaned forward for the close-up, he retracted his body into a semi-coiled position.  I suppose he’d read about the paparazzi’s wayward ways and opted to recoil like most celebrities. His white underside showed brightly and I tried to recall if this was a Northern black racer or an Eastern rat snake.

Hoping he would calm down, I went inside again. After less than two minutes, I returned to find my serpentine visitor gone. I looked on both sides of the steps, but there was neither a “snake in the grass” nor signs of his movement. The rapid departure made me strongly suspect that I had encountered one of Maryland’s fastest snakes, the Northern black racer.

But when I showed a reptile expert the photo, he pronounced my visitor an Eastern black snake, otherwise known as the Eastern rat snake. One of the area’s most common snakes, they may lay up to 40 eggs in late spring to midsummer. They are often seen along the Northwest Branch bike trail. Sometimes, they are mistaken for venomous copperheads and killed.

This is unfortunate, because the non-venomous snake helps control the local rodent  population. A major consumer of rats, mice and the occasional squirrel, the Eastern rat snake is a powerful constrictor, which aids him both in devouring prey and “hanging out” in trees.

In winter, the rat snakes will sometimes co-occupy chipmunk burrows or groundhog dens. This could result in misfortune for the chipmunks, but they typically awaken before snakes in spring . The snakes may also take up winter residence in basements or garages, and they are little risk to humans.  While they can bite if disturbed, the wound to humans is devoid of venom. (If bitten, however, people should visit a doctor as a precaution, after cleaning the wound and stopping the bleeding.)

Like other reptiles, snakes are exothermic, or cold-blooded. The term refers not to their ethics but to their body temperature, which roughly matches their environment, That’s why they prefer chipmunk holes and basements in winter, but seek shaded areas in warmer weather.

Another anecdote: A year ago, when I was wandering around outside looking for glimpses of nature, my wife photographed a visitor to our dining room: a young rat snake, by the looks of him, who either came in to enjoy my wife’s fine cooking or to seek a bit of relief from the outside heat.

My wife (who is from Alabama) calmly secured our two rowdy dogs, swept the young serpent into a trashcan, and unceremoniously dumped him into Magruder Park. This approach to reptilian visitors is preferred over execution as they provide an important function in our environment.

While I cannot know for sure, it may be that the recent visitor to my front steps was my wife’s friend returning for another round of Southern cooking. After a diet of mice and frogs, can you blame him?

My Two Cents: Safe Haven offers warm shelter for homeless — and warm feelings for its volunteers

Hyattsville Life and Times, 7 years ago 4 min read
From the Editor

From the Editor: More than our flags: True community encourages many types of courage