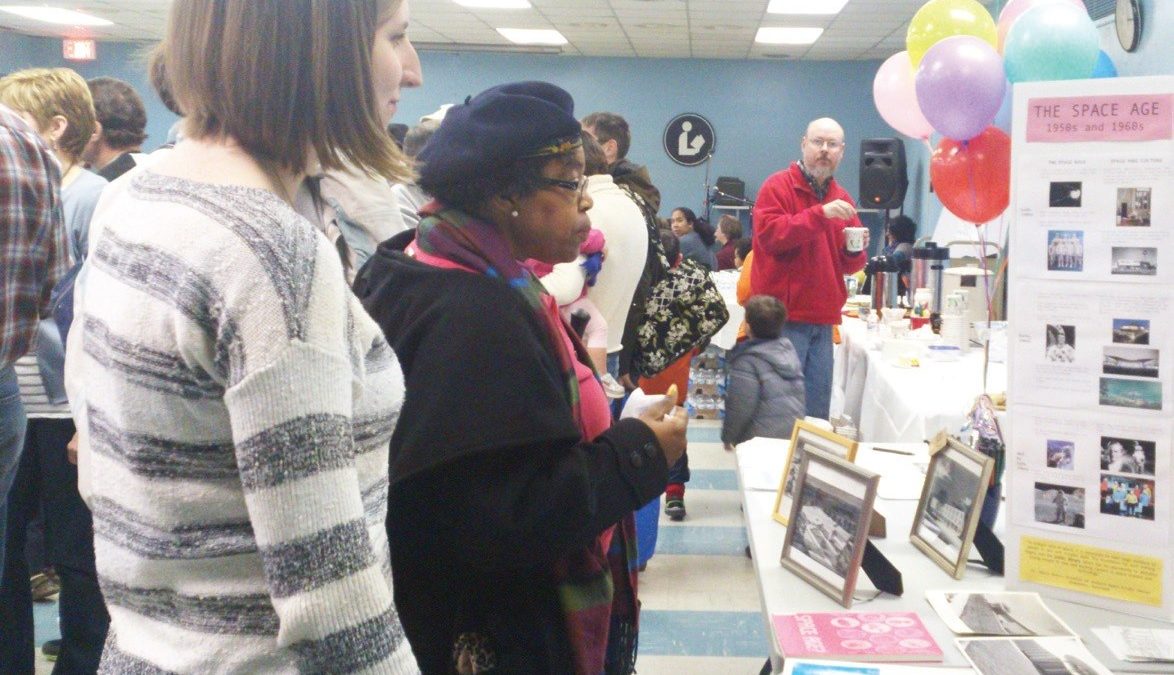 During the 50th-birthday bash for the Hyattsville library on March 2, visitors gathered in the ground-floor meeting room for a glimpse of the libraryʼs long and rich history. Courtesy Gray O'Dwyer
Bricks & Mortar

Sending out an SOS at the Hyattsville library

On Sunday, March 2, area residents gathered to celebrate the 50th anniversary of the Hyattsville library, the oldest in the Prince George’s County Memorial Library System. The event attracted local families, library patrons, and those who support the Save Our Saucer campaign to stop the proposed demolition of the building — and the iconic flying saucer stationed outside the main entrance.

Its future was thrown into doubt last August, when library officials held a public meeting to discuss plans to build a new library at 6530 Adelphi Road and were noncommittal about the saucer. Within days, the saucer had its own email address and a presence on Twitter and Facebook (which had more than 750 likes at press time). There are even coffee mugs, T-shirts, and a special brew from Franklins for sale in support of the movement.

Group members created promotional materials for the golden anniversary, including posters about the library’s long and rich history. The youngest attendees were kept entertained by music, crafts, and games provided by local musicians and library volunteers. Of particular interest, the children of the original architect Dennis Madden were there to tell the story of their father and why his work with the library was so important. Ward 1 Councilmember Bart Lawrence, cofounder of the Save Our Saucer group, was also in attendance and spent much of the event reaching out to share his message.

The event took place in the ground-floor meeting room, which represents a microcosm for all the issues surrounding the current controversy over demolishing the library for a new, modern structure. The ceilings are low, the tile is dingy, the doors are too narrow for ADA requirements. When it started to rain outside, leaking windows dripped water down the walls in streaks. A large mechanical room and several awkward storage closets took away from the useable meeting space, and there were few electrical outlets to serve the band’s equipment.

Party-goers generally were not in favor of demolishing the existing library for environmental or emotional reasons, but when asked directly many also believed that a new building would be more functional and better for the community. Some parents seemed to think the library is showing its age.

“They need a better children’s section,” said one mother. “The one they have is terrible.” She couldn’t enunciate exactly why it is so terrible, but dim light, low ceilings and outdated finishes are likely culprits.

This frustration with the current building is what the library system is counting on to drive interest in a new library. Bart Lawrence and others from the SOS group have protested what they see as precipitous action, soliciting only proposals for new structures rather than exploring renovation options to keep the library and its iconic saucer. Though Michael Gannon, Associate Director for Support Services and project manager, has stressed that no action regarding the library will happen without community involvement, preservation supporters are skeptical — with good reason.

The library building has an important place in Hyattsville history: as a memorial to John F. Kennedy, as the work of a pro-civil rights architect, as the first branch in Prince George’s County. The saucer is a striking homage to the space age and broadening horizons through reading. There are a lot of important things about the building that will be lost if it is demolished. Normally, the Preservation Office of the Maryland-National Capital Park and Planning Commission is vocal in its support of saving local history, and recent events have shown that mid-century architecture is a priority. However, county officials have been oddly silent on the issue; Historic Preservation Supervisor Howard Berger declined to comment for this story.

According to Gannon, the library system initially chose the firm of Grimm + Parker to design an entirely new structure, and their design was presented at the August community meeting. After protest from community members, the County indicated that a new request for proposals would go out around March 15. Importantly, there was nothing to indicate the RFP would entertain proposals for renovation plans.

Lawrence, the Save Our Saucer group, and those in the community who have architectural experience find this omission to be deliberate, fiscally irresponsible, and not in the best interests of the library. Based on the 2008 feasibility study published for the Laurel Branch, a renovation of the existing library would have cost over two million dollars less than the demolition option the county chose to implement.

The most glaring problem with not considering alternative approaches is that a renovation could be so easy. Similar buildings, such as UVA’s mid-century School of Architecture, have been renovated to become light-filled, state of the art environments at a fraction of the monetary and environmental cost of demolition and reconstruction. Those low ceilings in the library conceal three feet of massive, outdated ducting equipment that could easily be removed. Doors can be widened, windows added and unnecessary walls taken down.

All it takes is vision. But the library system is insisting on the easy fix, no matter how much may be lost.

Gray O’Dwyer is an architectural historian and recently moved from her home town of Richmond, Virginia, to join the Hyattsville neighborhood.

Tags #brick and mortar #Hyattsville Library #Save Our Saucer
Previous

Hyattsville Life and Times, 4 years ago 9 min read
Beyond Hyattsville