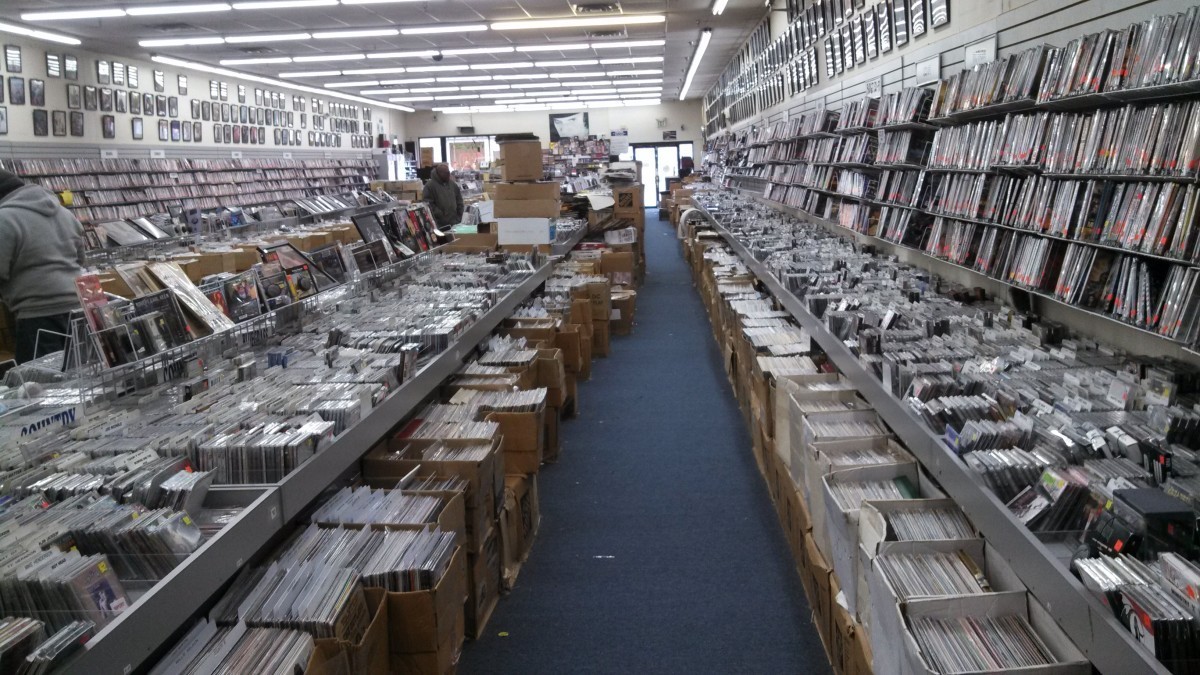 My addiction to other people’s old stuff has been well documented, but my husband has his own addiction: records. He often disappears into the basement for hours at a time to spin jazz records; sometimes he even takes our youngest on his “crate digging” excursions. And if the crowds at the annual D.C. Record Fair in January serve as any indication, his love of vinyl (old and new) is shared by many. So for this month, I thought I’d share some of our top picks for places in the area that buy and sell used vinyl.

While Hyattsville may not have its own record store, one of its residents owns one in Washington, D.C. Josh Harkavy opened Red Onion Records & Books at 1901 18th Street NW in January 2007, six months after moving to the area with his wife, Alyssa.

“I had no job prospects and a massive quantity of books and records. Opening a shop just seemed like the right thing to do,” Harkavy said.

Red Onion has since accumulated “tens of thousands of LPs…mostly from folks who have just moved on from listening to records,” he said. Aside from buying and selling people’s personal collections, he scours “top-secret spots” for inventory to fill the small Dupont Circle basement space to the brim. Customers range from 20-somethings, 30-somethings and “lots of couples” to “old-timers who have been into vinyl for decades,” he added.

Red Onion has also amassed something of a cult following, which is no small feat when D.C. vinyl institution Crooked Beat is right up the street in Adams Morgan. Yelp reviewers rave about Harkavy’s “tiny wonder” for its masterfully curated new and used selection of everything from indie rock to jazz, its reasonable prices and the personalized customer service of Harkavy. Record enthusiasts can keep up with new arrivals by liking Red Onion Records on Facebook; for buying and selling inquiries, visit www.redonionrecordsandbooks.com.

CDepot, located at 9039 Baltimore Avenue, is another store that satisfies a vinyl addict’s craving. The spot in College Park has been in business for nearly 20 years and has another location in Towson. While the store’s website (www.cdepot.com) boasts a “massive selection of both new and used CDs” — as well as used games and movies — it carries mostly used records in a variety of genres, with an especially comprehensive jazz, R&B and hip hop collection.

General manager Simon Peterson explained that CDepot only began selling vinyl in the last four or five years when it purchased the collection of a retired record-show exhibitor who was using the store’s basement for storage. The store also bought the inventory of some other area retailers that were going out of business, and one thing led to another.

People now come in on a daily basis to unload their record collections “for whatever reason — spring cleaning, emptying houses,” said Peterson. Near the front of the store, there’s often a row of boxed records just waiting to be inventoried, and supposedly even more backlogged records in the basement. (Sorry, I’m told the basement is off limits to even the most loyal of customers). When asked how many records the store has in total, Peterson estimated, “Probably literally at least 1 million — I’m not even exaggerating; I wish I was.”

If you’re interested in selling music, games or movies to CDepot, customers are advised to call ahead and make sure funds are available that day, since the shop pays cash on the spot and does not issue store credit. Records are competitively priced. I recently picked up three classic rock albums for about $12.

For nearby options in Montgomery County, Silver Spring offers two established shops: Joe’s Record Paradise at 8216 Georgia Avenue and The Record Exchange at 8236 Georgia Avenue And the new Bump ‘n Grind, located at 1200 East West Highway, sells two of my favorite things: records and espresso. But not just any espresso: it boasts a signature blend made with Hyattsville’s own Vigilante Coffee.

Hyattsville Life and Times, 3 years ago 6 min read
Beyond Hyattsville