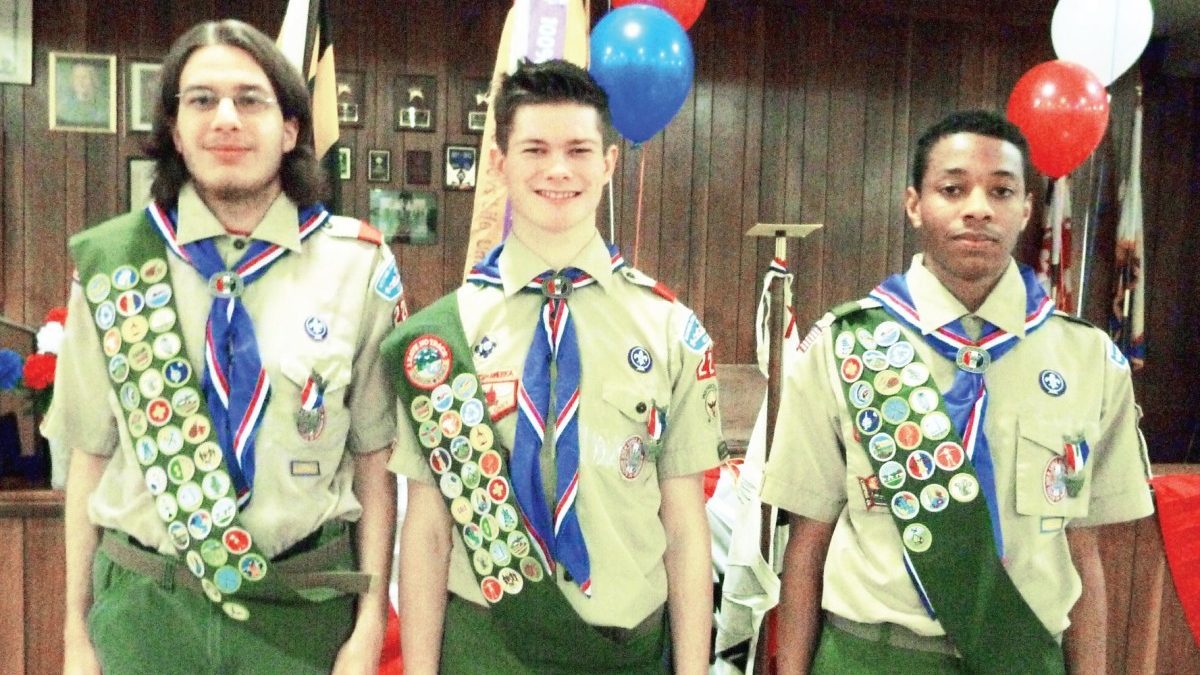 Boy Scouts of America Troop 224 welcomed a record number of Eagle Scouts to its ranks in 2013. From left: John LaChance, Kevin Dominey and Sheldon Brown at their Court of Honor, held in the St. Jerome Gold Room on January 26. The troop has been meeting there since 1948. Credit: Bill Thomas
Hyattsville

BY SUSIE CURRIE — Regional leaders of the Boy Scouts of America (BSA) have bestowed the district’s highest honor on a local couple for their work with Troop 224.

“This is not the first time a married couple have received the award, but it is rare,” said Lenny Wertz, a vice chair of the Prince George’s County District Committee of the BSA’s National Capital Area Council. More often, he said, spouses are honored in different years.

Troop 224 Scoutmaster Bill Thomas and his wife, Cathleen Hapeman, were among the five Award of Merit honorees at a February 8 dinner in Cheltenham, Md. The district serves more than 2,000 county youth in 103 scouting units.

Both said they were surprised at the accolade. (Hapeman didn’t even know she was going to get an award until she heard her name.)

“I was amazed,” said Thomas. “They say 90 percent of life is showing up — well, for the past 15 years, I’ve been showing up and having fun.  I did not expect an award for doing that!”

The troop was incorporated in Hyattsville in 1948, and it has been meeting at St. Jerome for most of that time. The late Joe Maratta was the first Scoutmaster, serving from 1948 to 1961. Then George “Doc” Dent, took the reins from 1961 to 1974; his uncle, Lew, and brother, Bill, had leadership roles as well, and the family was active in the troop for decades.

Six more scoutmasters followed, serving terms of three to six years each. Thomas became the troop’s ninth scoutmaster in 2001. Since then, the number of Eagle Scouts from the troop has grown from 10 to 29. Thomas and Hapeman’s 17-year-old twins, Max and Cody, are on track to become numbers 30 and 31 this year.

In 2013, four Scouts — a troop record — attained the rank: Greenbelt resident Sheldon Brown; Timothy Cain and Kevin Dominey, both from Hyattsville; and John LaChance, of Riverdale Park. One of the major Eagle requirements is to develop, plan and complete a service project before the Scout turns 18.

Often the projects benefit Hyattsville or neighboring communities. Cain helped remove invasive plants at Magruder Park. Dominey created and marked several walking trails through the city. And LaChance, whose work was nominated for the district’s Eagle Scout Service Project of the Year, created a geocaching trail along the Northwest Branch with a Battle of Bladensburg theme.

As the troop’s advancement chair since 2007, Hapeman helps chart the scouts’ paths through the six ranks of Scouting, from Tenderfoot to Eagle. Among other duties for the troop, she plans advancement opportunities and merit badge classes around meetings, camping events and school breaks. For the week-long summer camp, held every July with other troops at Camp Bashore, she coordinates scout schedules so that boys can work on merit badges together.

“This builds camaraderie and allows them to encourage each other, especially on some of the more difficult merit badges,” noted Hapeman. “I am always pleased to see a Scout make rank or earn a merit badge, especially if he worked really hard.”

Many of the opportunities to advance come during the weekend camping trips, held each month throughout the year. (Thomas reluctantly canceled the February trip the morning of departure, when two feet of snow closed their destination campsite.)

On the January trip, scouts Peter Currie and Joseph Riordon earned their Wilderness Survival Badge by building a shelter and sleeping under it on the snow-covered ground. Both nights.

Experiences like that, said Thomas, set the program apart: “Where else can a teenager learn how to prepare a menu, shop for food, cook over an open campfire, competently use a compass and map, camp at both 0 degrees and 100 degrees, and start a fire with no matches in any conditions at all?”

But it’s not all work and no play on those weekends.

“Mr. Thomas is a great leader, and very fun to be around,” said Stephen Miller, 13, of Hyattsville. “On the January trip, we went hunting for Wild Ramen — they hid packs of it in the snow and we had to find it.”

Miller’s father, Tim, is an assistant scoutmaster and Eagle Scout. One thing he appreciates about the troop is the way it builds leadership skills among the boys.

Before 2001, said Miller, the troop “was mostly adult-led.” Now, he said, the scouts are the leaders, planning and organizing the camping trips and other projects. “[Thomas] has really developed the 16- and 17-year-olds to lead the 11- and 12-year-olds.”

One way he did that was by instituting patrols, small groups of four to eight Scouts organized by age, rank or interests.  Members rotate being patrol leader, with the senior patrol leader presiding over the entire troop.

Hyattsville resident Becky Williams said that her son, 16-year-old Emery Bacon, “has become more thoughtful and resourceful” during his years with Troop 224. “Now when he’s in the woods, he knows what to do. He can chop wood, build a fire. He knows first aid.”

Longtime Hyattsville resident Colleen Aistis, the chair of the troop’s Adult Leadership Committee, is the mother of an Eagle Scout and wife of an assistant scoutmaster.

“I think we can all agree that [Thomas and Hapeman] exemplify the very best in scouting and we are fortunate to have their leadership, dedication and guidance in Troop 224,” wrote Aistis to Scout families after the awards dinner. “Our troop is made that much stronger because of their commitment.”