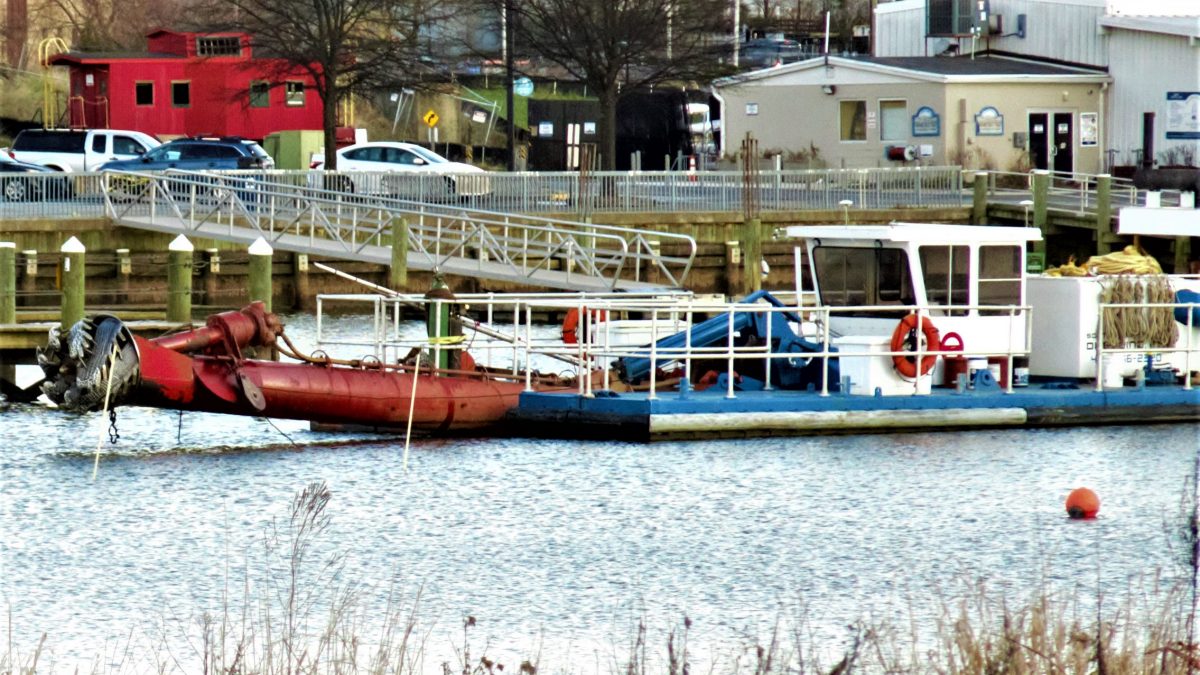 During December and January, when the Bladensburg waterfront is at its quietest, the Rhodes II is at its loudest, working hard to solve a 200-year-old problem.

The Rhodes II is a boat that carries a 715 horsepower, 77-foot dredge operated by Southern Maryland Dredging.

The problem is the continuous silting up of the Anacostia River at the Bladensburg waterfront. According to the Maryland National Capital Park and Planning Commission, when the Town of Bladensburg was founded in 1742, its harbor was nearly 40 feet deep. However, the rapid cutting of trees caused by the development of farms, houses and towns further upstream unleashed tremendous soil erosion. By the 1850s, the river had become too shallow to ship tobacco, the county’s most profitable crop, and the port faded away.

Today, the Bladensburg Waterfront Park is a popular recreation area, offering picnicking, bike trails, fishing, kayaking and boat tours. However, it still suffers from the same silting problem. Because it is only a few miles from the Chesapeake Bay, the Anacostia River rises and falls approximately 3 feet with the tides. At low tide, the river near the waterfront park can be as shallow as 6 inches, exposing large sandbars that can nearly choke off the flow of both water and marine life.

That’s why on Dec. 2, 2020, when people were preparing for Christmas or sheltering from COVID-19, the Rhodes II was hard at work. “There are two reasons the dredge only operates in the winter,” said Robert Walker, the park’s facility director. “One is simply that this is the time of year when the fewest people use the park for fishing and boating. The other reason is that we want to have as little impact as possible on the fish that spawn and the other wildlife. Our permit expires by the end of February, but the work never takes that long.”

The Rhodes II will dredge a 13.22-acre area that reaches approximately from the main fishing pier to the end of the boatyard, down to a depth of 6 feet, removing about 30,000 cubic yards of material. The hydraulic suction dredge uses a 43-inch diameter cutter head to loosen the sediment and then pumps a mixture of sediment and water out through a 14-inch discharge pipe. According to the application that the county parks department filed with the Army Corps of Engineers, the discharge pipe stretches approximately 1,800 feet. It extends from the dredge to settling ponds in Colmar Manor Park, on the west side of the Anacostia.

The sediment consists mostly of soil, sand and gravel. Crewmember Ethan Frawley explained that any water that drains back into the river from the settling ponds must meet the standards of the federal Clean Water Act. The clean sand and gravel are trucked away and recycled for construction and reclamation projects.

Of course, there is a lot of other stuff in the bottom of the river. At the beginning of 2020, Erica Wilson Goldman, the director of operations for Southern Maryland Dredging, noted, “A huge part of this project is clean up. We’ve been dredging this park since 1978, and each time we dredge, we remove at least 300 tires, shopping carts, old bicycles, old cable, and even a few cars.”

Hyattsville Life and Times, 8 years ago 2 min read
From the Editor

From the Editor: What are the Times coming to?