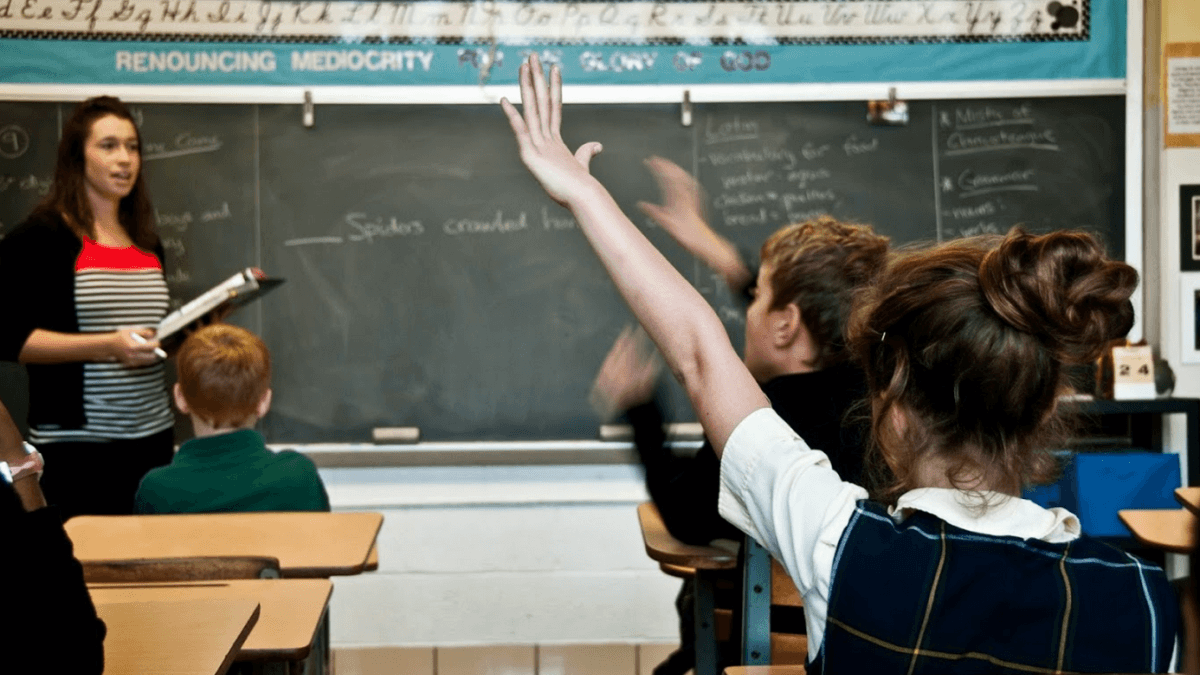 In the glimmering neo-gothic vault that is St. Jerome Catholic Church at night, Kelly Branaman, the Interim Superintendent of Catholic Schools for the Archdiocese of Washington, rose quickly to her feet. She had a question for Mary Pat Donoghue, the principal of St. Jerome Academy.

The K-8 Catholic school sits on the hill above the Hyattsville Municipal Building and next to the church, and in recent years, the academy has become a model for the new classical education movement among Catholic schools. Enrollment has increased since 2010, from about 270 to nearly 300 students.

Branaman, who had just heard Principal Donoghue’s January 28 presentation to parents and parishioners about the school’s finances and plans for the future, was curious about the growing enrollment.

She asked Donoghue to explain how this could be, when Catholic school enrollment has waned in the Archdiocese of Washington and elsewhere. It was only a little over five years ago that Branaman, then Associate Superintendent, had seen the Archdiocese threaten the parish school with closure.

In her response, Donoghue credited the school’s recent success to parishioners’ support during the school’s crisis five years ago, and to their continuing contributions of time, money, and talent. A committee of parishioners passionate about education, including faculty from the Catholic University of America, and homeschooling parents, rapidly developed the classical liberal arts Educational Plan that now guides the school’s curriculum.

The new curriculum focuses on “two thousand years of Catholic thought, history, culture, and arts,” according to the Education Plan’s vision statement. Students learn Latin. They memorize historical facts, definitions of parts of speech, bible verses, and hymns. They approach science through the lense of nature studies. Each grade has an integrated historical, literary, and arts focus; for instance, first graders study Ancient Greece.

For the past two years, the school has also offered a Montessori program for toddlers through kindergarteners, which according to its teachers, helps students develop attentiveness and language and math skills that ready them for the classical approach.

The school’s new classical curriculum attracted teachers “dedicated to this model of education,” said Donoghue. Despite salary freezes brought on by the school’s financial difficulties, the school “never had to advertise” for teachers. Donoghue also said teacher turnover has been very low since the curriculum transition was accomplished.

Along with enrollment, tuition at St. Jerome’s has increased over the past five years by about 10 percent, and an additional 5 percent increase is planned for next year, Donoghue said. Though St. Jerome Academy has historically given large tuition discounts to siblings, the school is moving towards making such sibling discounts need-based, starting in 2016. According to Donoghue, the decision was made partly because the school’s population now includes more large Catholic families and more affluent families. Average family income for students is now $117,000, and the number of students from families on public assistance has dropped to around 15 percent.

Recent increases in enrollment and tuition have not been enough to cover new expenses incurred during the school’s transition. Between 2010 and 2015, the school’s debt grew from $400,000 to $900,000. Administrators are hopeful that the tuition increases and an improved fundraising strategy will close the gap between revenues and expenses.

Still, St. Jerome’s is planning major renovations, interior and exterior, for the school next year. The school is working with the county’s stormwater management program to replace concrete and asphalt playgrounds with landscaping, which would reduce flooding and runoff problems. St. Jerome’s also plans to renovate classrooms, funded in part through a new renovation fee to families, and through a grant from the Raskob Foundation that they hope will be awarded this spring.

Donoghue said renovating to beautify the school is in keeping with the St. Jerome Academy vision of “fostering wonder and love for all that is. . . true, good and beautiful.”

A 1983 graduate of St. Jerome Academy, which has been a neighborhood institution since 1943, Donoghue said she is “dedicated to offering an excellent educational option” for residents of Hyattsville, her hometown.

Kit Slack is a Hyattsville resident and mother of three small children, plus one more on the way. She is home with her kids, and has had two prior careers, as an attorney and as an organizer. Her two eldest are preschoolers in St. Jerome Academy’s Montessori program.

Then & Now: If the devil is in the details, why is it so interesting to get lost in them?