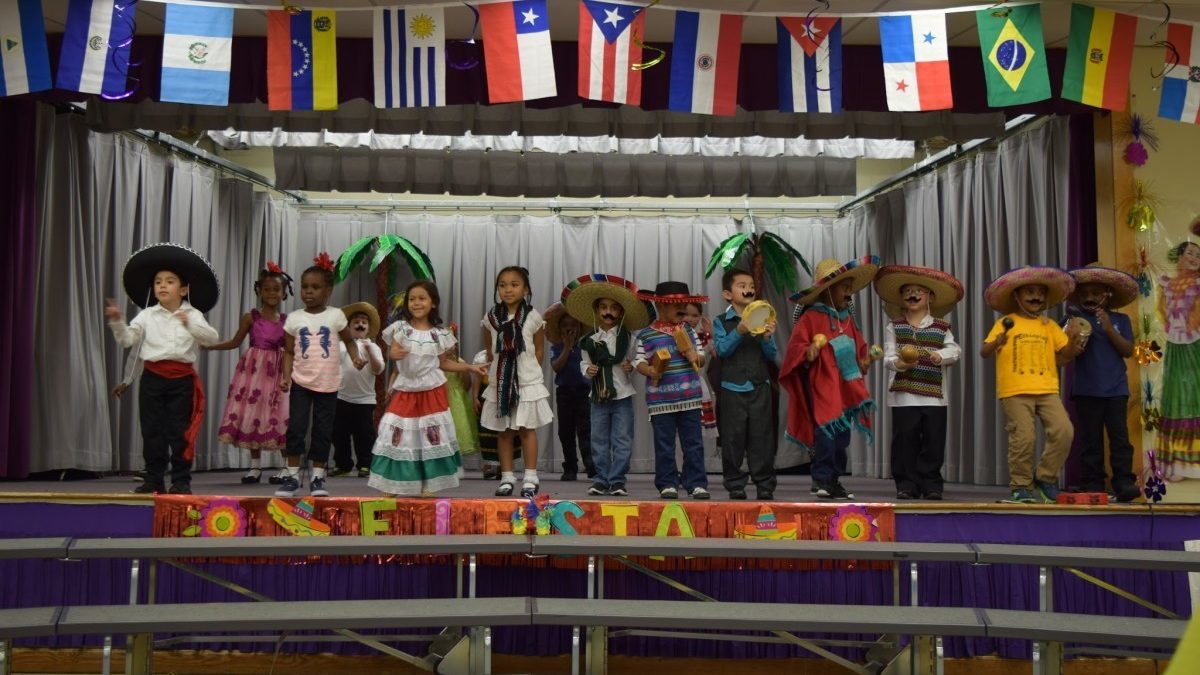 Students demonstrate the traditions of Mexico for teachers and parents. Photo courtesy Kit Slack
Beyond Hyattsville

“Are you Precious?  . . . Or Miracle?” asks a teacher, looking down at one of two twin five-year-olds in matching clothes, ponytails, and princess backpacks. It is 7:20 a.m., and the girl has broken out of a line where she was waiting to go into class; she needs to go to the bathroom.

The teacher can be forgiven for not having the girls’ names straight yet.  Thanks to a new dual language magnet program at César Chávez Elementary School, there are many more kindergarteners than students at any other grade level.  The line of 5-year-olds stretches out of the entryway where the other classes wait, past the front door, towards another wing of the school.

César Chávez Elementary, on Riggs Road just west of Sligo Creek, has been a small neighborhood school providing bilingual education in various forms since 2000.  Last year, 35 percent of students were learning English as a second language. Enrollment at the school, as a function of neighborhood demographics, has been roughly half Black and half Latino since its founding.

César Chávez is the only school in the Prince George’s County School District (PGCPS) using this dual language model. Magnet program participants will receive instruction 50 percent in Spanish for all of elementary school.

Entrance to the magnet program was for kindergarteners only this year and was conducted by lottery. The District capped enrollment by native Spanish speakers at 50 percent. Dr. Kevin Maxwell, the current chief executive officer of PGCPS, made clear when he took on his current role in August 2013 that he hoped to expand Spanish immersion and other specialty programs to make the district more competitive and attract middle class parents. César Chávez Principal Jose Taboada served as part of Dr. Maxwell’s transition team.

In 2006, the year Taboada became principal, enrollment at Cesar Chavez was on a downward slope that became steeper as Rosa L. Parks Elementary opened nearby, dropping from a peak of 450 in 2002 down to 233 in 2010 before stabilizing.

Principal Taboada said that when he took his post at the school, he scrapped an unpopular system whereby classes were separated based on levels of Spanish proficiency, inadvertently concentrating Black students in some classes and Latino students in others. He also made efforts in parent orientations to communicate the value of bilingual education. He hoped from the beginning to develop a magnet program at the school.

For a time, the school had high teacher-to-student ratios because of the drop in enrollment. Test scores, which given the school’s small size vary widely, spiked for the next few years — for third grade reading, for example, proficiency levels went up from 35 percent in 2008 to 97 percent in 2010. Principal Taboada said that the bad economy and budget cuts made it hard to keep the 2010 proficiency levels up. Third grade reading proficiency in 2013 and 2014 was 79 percent and 65 percent respectively.

Though César Chávez Elementary is no longer technically a neighborhood school because admission is now based on lottery, the school continues to provide resources to the community. Teachers provide language help for parents in both English and Spanish one evening a month. The school promotes a cancer awareness program, maintains a large vegetable garden, and organizes men’s and women’s mentoring programs that foster multicultural community around the school.

So far, the new kindergarteners seem to be thriving.  One kindergarten class has been studying the traditions of Mexico for Hispanic Heritage month.  On an evening in late October, the boys put on black mustaches and sombreros, and the girls put on traditional white blouses and wide skirts.  Shaking maracas and dancing a traditional dance, they sang for their teachers and parents a popular song dating from the Mexican Revolution: