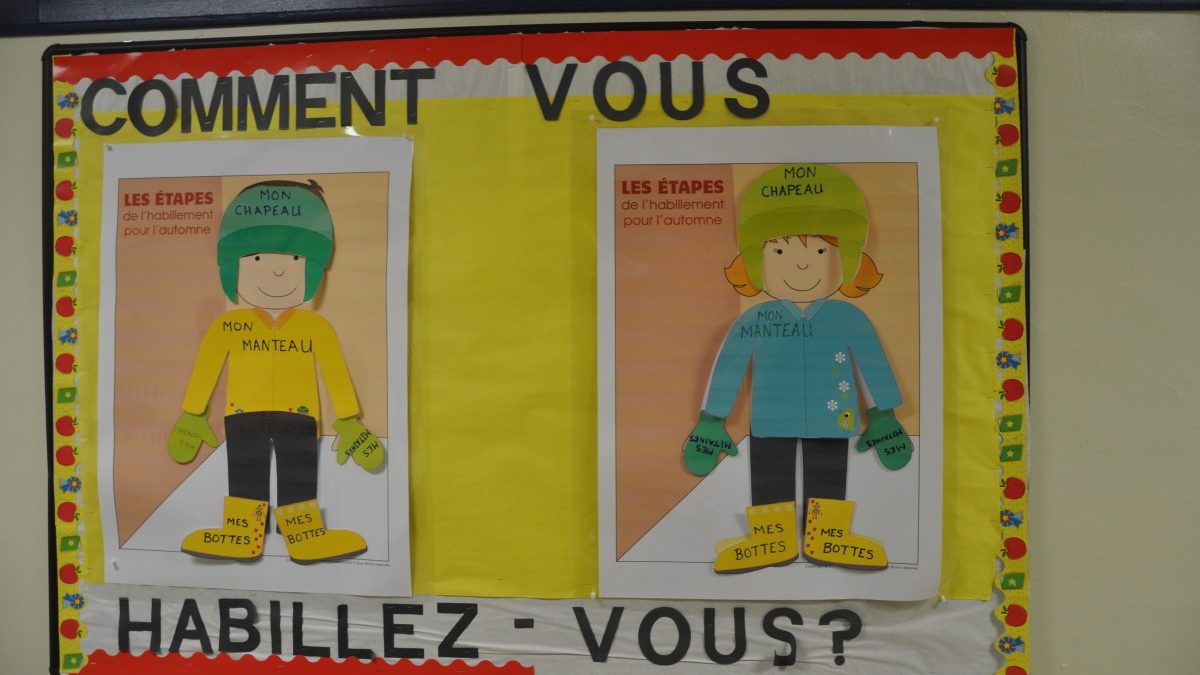 The school's hallways boast educational decorations. This sign asks, "How do you dress?" Photo courtesy Kit Slack.
Beyond Hyattsville

On a grey fall morning in Greenbelt, the newly renovated site of the Robert Goddard French Immersion School is dazzling in fresh white paint — paint that can’t quite conceal the thick, raised letters that still spell out “Greenbelt Middle School” over the front door. The old lettering is still up because a new name for the French immersion school is pending to go with its new location. The new name (which will replace “Robert Goddard) won’t be official until January, after which a new, permanent sign will be installed.

Awaiting final approval, the new name is expected to be the Dora Kennedy K-8 French Immersion School. Dr. Dora Kennedy, who died in 2009, was the head of foreign language education in the county between 1959 and 1991. She was also an early proponent of language immersion and one of the founders of the National Museum of Language in College Park.

Dr. Kennedy would have been proud this September, when the U.S. Department of Education named Robert Goddard French Immersion School a National Blue Ribbon School in recognition of its exemplary academic excellence. It was the only public school in Prince George’s County to receive the award this year and one of fewer than 350 schools nationwide.

The school began in 1985 as a French immersion program at a high school in Bladensburg, only the second language immersion program in the country. In 2002, it moved to Seabrook, and became the Robert Goddard French Immersion School, a K-8 school, sharing a building with Robert Goddard Montessori School. This fall, it opened new doors for the third time.

The student body is approximately three-quarters African American, 15 percent white, and less than 5 percent Hispanic. About a quarter of students qualify for free or discounted lunches. On statewide assessment tests over the past five years, over 90 percent of students have been deemed “proficient” or “advanced” in reading and math. Students have also received top honors in the Diplôme d’Études en Langue Francaise, a certification of competency in French from the French Ministry of Education.

The school’s curriculum is rigorous. All core subjects are taught in French starting in kindergarten. Students also have homework in reading and math every night. At every grade level, the teaching team coordinates on nighly homework. Still, many parents say the homework load can be heavy.

Teachers at the school are native French speakers from all over the world, including Morocco, Togo, and Syria. Parent Teacher Association (PTA) president Katrina Dodro says the result is “an awesome opportunity for children to get to be more global … in a multilingual school that is also multicultural.”

Ms. Dodro and Principal Nasser Abi agree that one of the school’s other great strengths is its involved parents and their support of the school’s committed teachers. “Parents’ involvement helps the child, the school, and the teacher to improve,” said Principal Abi.

One parent who is an experienced grant writer volunteers her skills to the school.  Other parents work with teachers to help lead the school’s rich extracurricular offerings, which include chess, art, lego robotics, fitness, 4-H, and science-focused clubs. Principal Abi says parents are also very committed to the school’s music programs; orchestra and band start in fourth grade and the school regularly performs well in county-wide music competitions.

Some parents say communication with the school can be challenging, especially since only a small percentage of families are French speakers. The school encourages parents to communicate with teachers via email.

Ms. Dodro explained that this is the PTA’s “year of communication.”  The PTA is encouraging parents to subscribe to a text-based news and update system and to listservs that exist for each grade level. These efforts will eventually replace paper flyers that often languish in backpacks, Dodro said.

This year, the school added a fourth kindergarten class, boosting the number of kindergarteners to a total of one hundred children. Three hundred remain l on the waiting list. Priority admission is given to new kindergarten applicants who are siblings of existing students, with  the remaining places filled by a lottery. For upper grades, admission to any available seats is made on the basis of assessment testing, including French language skills.

Given the school’s National Blue Ribbon status and attractive new facility, waiting lists are likely to be long again next fall.