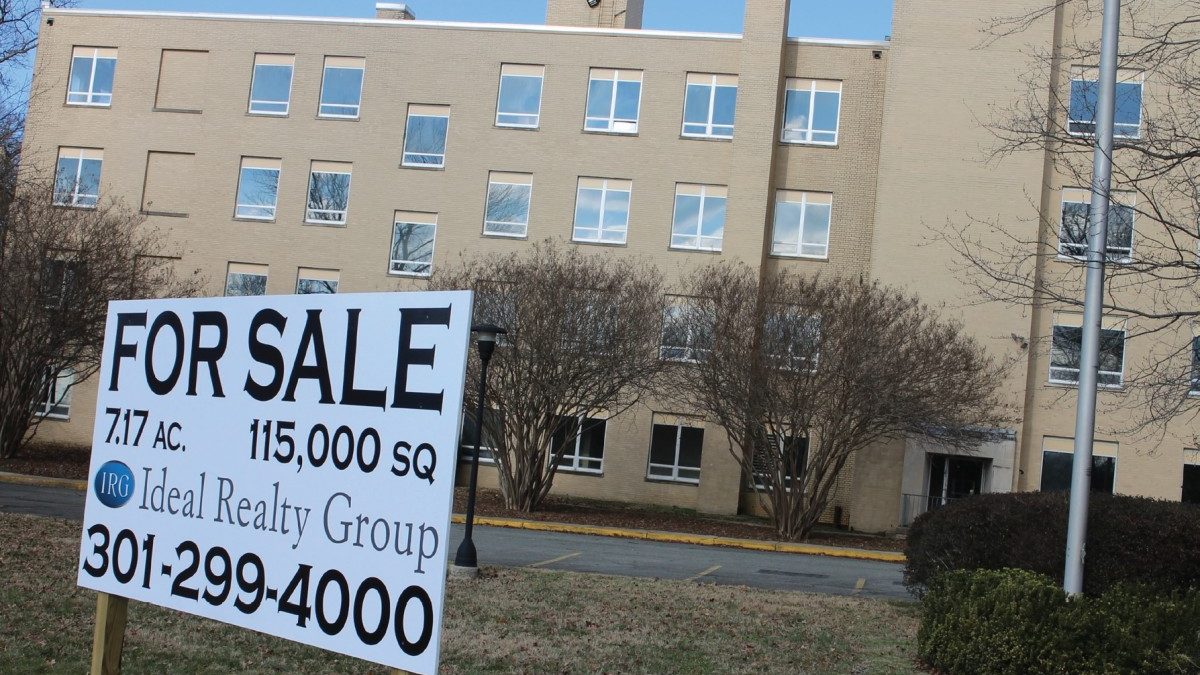 After nearly a decade of owning the former WSSC headquarters, Douglas Development is marketing the
Business

BY SUSIE CURRIE AND GRAY O’DWYER — After years of inaction, the former headquarters of the Washington Suburban Sanitary Commission has garnered a lot of attention in recent weeks. In early January, a sign posted by Ideal Realty Group in front of 4017 Hamilton Street was the first public notice that current owner Douglas Development intends to sell it.

The property includes not only the WSSC building, as it is commonly known, but also the even larger parking lot across Hamilton Street — a total of more than seven sprawling acres next to Magruder Park.

The building itself, which sits on a 3.19-acre lot, was constructed in three stages. The earliest section, dating to 1939, is also the smallest. Four-story additions enlarged the structure in 1953 and 1964 to accommodate the expanding utility, which supplies water to most of Prince George’s and Montgomery counties.

WSSC abandoned its historic headquarters in 2001 to move into a new skyscraper in Laurel, and the building has been empty ever since. The property was sold in 2005 to major D.C.-area developer Douglas Jemal, who outbid a city-backed plan for it that would have put single-family homes on the site and deeded the parking-lot parcel to Hyattsville.

As part of the Hyattsville Historic District, it would qualify to receive historic tax credits toward rehabilitation. Though this can be lucrative, the time it takes to secure investors makes it highly unlikely that any tax-credit project — historic preservation, low-income, senior housing — would be able to quickly gather the capital or loan security.

According to state tax records, Douglas Development paid $1.1 million; last July’s property assessment put the value at $600,000. Most observers agree that that does not represent the market value, however, and expect it to sell for multiple times that amount.

“The price will be what the market can bear,” said Ideal Realty broker Allen Manesh, who is handling the transaction. “And the successful bid will be the bid that can close most quickly.”

The property brochure seems geared towards a bigger developer with visions of multi-family dwellings, which tend to be more profitable than single-family homes.

A new owner would be under no obligation to preserve the historic shell and may petition for demolition permits and a zoning change from R-55, detached single-family housing — which is what was on the site before 1939. Because WSSC is considered a government entity, it is not bound by zoning requirements. But unless the next owner is in the same category, the development will have to either abide by R-55 conditions or seek rezoning.

The brochure says that “there is an opportunity to change the zoning” to allow high-density residential. It also shows conceptual plans for 99 condos where the building stands now, and 21 single-family detached homes across the street on the current parking lot.

But the parking lot is in the floodplain, and increasingly strict county regulations (not to mention the current open-space zoning) would make it all but impossible to build there.

In any case, said Acting City Administrator Jim Chandler, the rezoning question hasn’t come up yet. When Councilmember Patrick Paschall (Ward 3) asked about the status of the sale during the January 6 council meeting, Chandler said that no developer has submitted a “tangible” plan to the city.

“[New owners] may request rezoning, or they may not,” he said. “You don’t know until someone puts a contract on it.”

Manesh met with Chandler and then-City Administrator Jerry Schiro in September, letting them know that he was handling the sale for Douglas and that he would advise potential buyers to contact the city.

“The city has not been part of any negotiations We got a call from one developer a month ago, and have heard nothing since,” said Chandler, who is also the city’s director of community and economic development, in an interview. Sources confirmed later that it was a national company whose website features a variety of low- and moderate-income multifamily housing.

“If we get delivered to us a real proposal,” said Chandler, “the first thing we would do is send it to the Planning Committee, and the developer would have opportunity to present to them.”

That doesn’t mean that no one is considering the possibilities, though, especially among those who remember the last time it was for sale. Many neighbors have been airing their views on local listservs, around town and to their council representatives. Mayor Marc Tartaro took out an 11th-hour ad in this issue to explain his vision, which encompasses not only the WSSC building but also some of the other properties the city owns.

“There is lots of speculation floating around,” said Chandler, “[but] it probably makes more sense to revisit this question after we review the facilities assessment.”

The city owns five buildings, and the question of what to do with them has surfaced briefly at recent council meetings and will come up during the budget process.

Councilmember Shani Warner (Ward 2) says the building “is probably the biggest issue facing the  neighbors,” and has discussed it with several of them. “I’m eager to see something else take its place. Generally speaking, it’s hard to imagine anything worse than the status quo on property.”

Hyattsville Life and Times, 7 years ago 1 min read
From the Editor

Miss Floribunda: A fumble in the jungle: rainforest remedies

ArtBurn: In a quick show, Chris Suspect proves himself adept