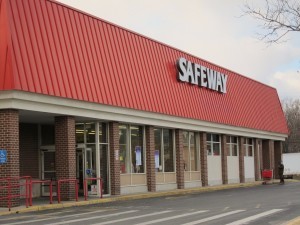 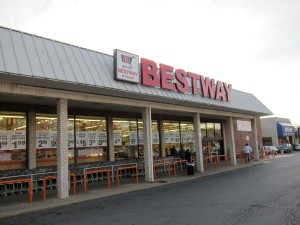 Ending months of speculation, Safeway executives confirmed that the long-neglected Hamilton Street store will close after 30 years. For the first time since 1928, Safeway will not have a presence in Hyattsville. Like the chain’s former Adelphi branch, on Riggs Road, this building will become a Bestway. Photos courtesy Susie Currie.

BY SUSIE CURRIE — Ending months of speculation, Safeway executives have confirmed that the Hyattsville store will close on February 4. The building has been sold to Bestway, described on its website as “one of the largest independent Hispanic food retailers on the East Coast.”

Previously, Bestway replaced the Safeway at Adelphi and Riggs roads. The Hyattsville store will be the seventh in the region and the third in Maryland.

The move comes nearly 30 years to the day after Safeway opened in that location. It ends more than a century’s presence in Hyattsville, dating back to at least 1909, when the Sanitary Grocery Co. occupied the corner of Gallatin Street and 42nd Place. In 1928, Safeway bought that store (now the home of Yoga Space) as well as the rest of the chain.

From that location the market would move twice more, to Route 1 and then to the corner of Hamilton Street and Queens Chapel Road, before opening at 3511 Hamilton Street on February 3, 1982.

Employees, who will be offered jobs at other locations, were given the news on January 5. But store manager Nikki Nell said she had been fielding their questions since at least Thanksgiving.

Questions intensified last month when a sign on the Safeway pharmacy window informed customers that it would close on December 21, transferring all prescriptions to the Rite Aid on Route 1. At about the same time, shipments became spotty; the regular arrival of two cases of weekly store circulars stopped altogether.

Rumors about the store’s closing date back to 2006, when University Town Center announced that a new 56,000-square-foot Safeway would open in 2008. But financial pressures, which have since led to foreclosures, kept the developer from building it.

Meanwhile, the store stayed where it was – and seemed to fall off the radar of upper management. Freezers and refrigerators regularly went on the blink, sometimes for days at a time, while various perishable items (and even some bottled ones) were left on the shelves well past their expiration dates.

That drove many customers away – and those that remained grew increasingly dissatisfied. By August 2010, shoppers’ complaints had reached a crescendo on the local H.O.P.E. listserv. Then-councilmember Douglas Dudrow (Ward 1) organized a public meeting with Safeway officials drew 60 concerned residents.

Many singled out store employees for praise while airing a lengthy list of grievances that included shrinking selection, long lines, wilting produce and a lack of motorized carts.

Director of Public Affairs Greg Ten Eyck acknowledged that “that store was due for an upgrade probably a few years ago,” a view that seemed to be unanimous among the crowd.

In 2004, the California-based company announced a goal of “lifestyling” every store in the chain, replacing existing stores with ones featuring subdued lighting, custom flooring, earth tones, wider selection and enhanced service departments. New stores would all be built as so-called Lifestyle Safeways, like the ones in Greenbelt and Hillendale.

In an interview after the public meeting, Ten Eyck said he would recommend this modernization for the Hamilton Street store.  Since then, though, changes have been minor and “mostly cosmetic,” he said recently.

Elsewhere in the region, three stores in Montgomery are being transformed into the new model. The revamped Bethesda location opened in October, and Olney’s should open next month. Wheaton’s is in progress, part of a large revitalization plan that should be completed next year.

Hyattsville becomes the fourth store in Prince George’s County to close since May; others were in Temple Hills, Upper Marlboro and District Heights.

Manager of Public Affairs Craig Muckle says that the company is considering rebuilding stores in Croom and Bowie, although nothing is in the pipeline yet. The most recent opening in Prince George’s County was a store in Brandywine, in 2009. Before that, it was Bowie in 2006.

“I was disappointed but not surprised,”  said Dudrow of the imminent closing. “The [officials] did say at the end of the meeting that they would take it back to headquarters. Maybe the decision was already made. ”

Hugh’s News: A feast, followed by a fast